Previously on Pretty Little Liars, Ashley Marin stood around in her perfect kitchen in a killer dress, drinking whiskey (neat) and pondering the life she could have led if she hadn’t spent the last decade keeping Hanna out of prison. The Liars remembered the time Sara Harvey got lit up by a tractor battery that was sitting on the floor of the building where she led them to die and felt really guilty about it. A returned to town using emojis, and the minute one of his menacing messages showed up on their phones, they all reverted to the behaviors of their youth, lying and lying and lying and generally making the worst decisions known to humankind.

Byron Montgomery is sitting in the dark in his living room so close to a lamp that he could turn it on with his pinky finger without even extending his arm, but instead of that he just sits there in the pitch black and when his daughter arrives home — his daughter who has been the victim of so much torture that literally three weeks ago she told a judge that she can barely even make herself get in an elevator with other people — he waits for her to turn on the overhead light, and when she gasps and clutches her chest because she’s assuming she’s about to get kidnapped and held hostage, he goes, “Did I scare you?” 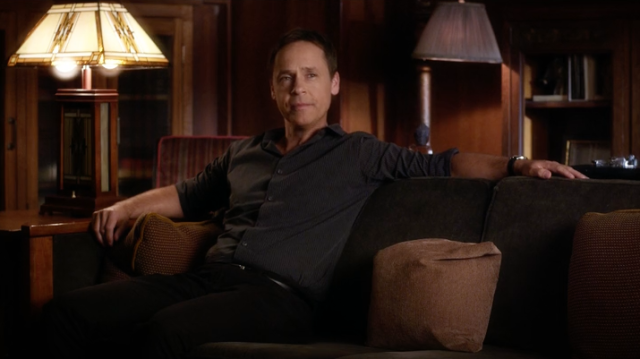 You know you love me. 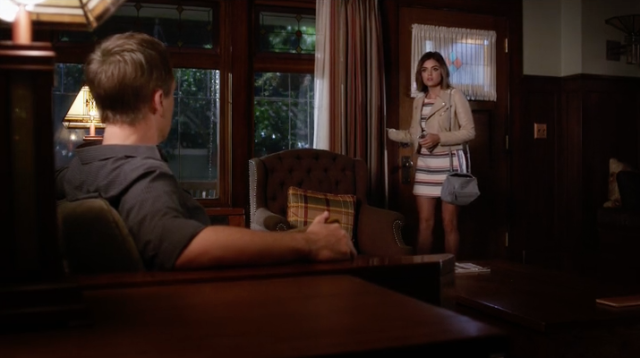 LOL, Did I scare you? Did you think you were about to get trapped in a box with a dead man again and be thrown from a moving train? Did you think my former student that I fucked when I was married to your mom was going to lock you in the basement one more time? Hahahaha!

Hurl yourself into the fires of Mount Doom, Byron. God. Somehow he has hoodwinked Ella into marrying him again, and they’ve been creeping around so as not to upset Aria, who has historically been traumatized by nothing as much as people creeping around. She says she’s happy for them, but Ella doesn’t believe her. She follows Aria to her bedroom and says when Aria’s surprised she makes this one face but when she’s concerned she makes this whole other face, and honestly, she seemed more concerned when they told her about the engagement. She corrects Ella and points out that the face she was making was her My PTSD Just Got Triggered Face, and she wishes Ella all the best with her second marriage to the second worst man on earth. Also, she’s been watching Downton Abbey and she knows if Ella and Byron get married, Ella can’t be forced to testify against him if he goes to trial for murdering Charlotte. And for reasons I do not understand, she considers that a win. 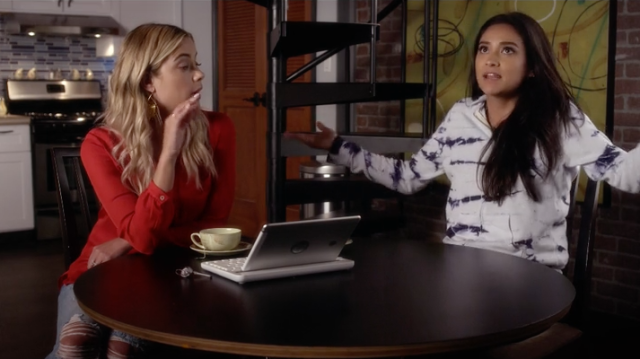 But WHY am I the only person on this show without a love interest?!

Hanna’s day starts off bad and gets worse. Her boss, who is to Miranda Priestly what Twinkies are to wedding cake, is on her ass about getting back to Manhattan for a fashion show, and it has to be all Asians modeling, and individual packets of Himalayan salt for her lunch, and probably some wankshite coffee order. On top of that, Hanna’s beautiful and very boring fiance who doesn’t know that blonde/blonde ships never really sail, is all up in her nut and begging for attention. And on top of that is Emily getting her eggs harvested and recuperating at Lucas’ “penthouse” with Hanna. And on top of that is Devil Emoji telling her to find the hard drive her mom stole from the server farm, the one with the Radley footage from the night Charlotte died, or else.

Hanna: I can’t believe you stole that hard drive!
Ashley: The one you literally stood in this kitchen and asked me to steal 24 hours ago?
Hanna: Yes, that one! How could you?
Ashley: Whoo boy. Well, okay, I didn’t?
Hanna: Whatever mother, I remember when we had a million dollars, cash money, stuffed inside boxes of elbow noodles. Give it to me and I’ll destroy it?
Ashley: Like you destroyed that handgun from my closet by burying it in a frat house front yard in the middle of a party? 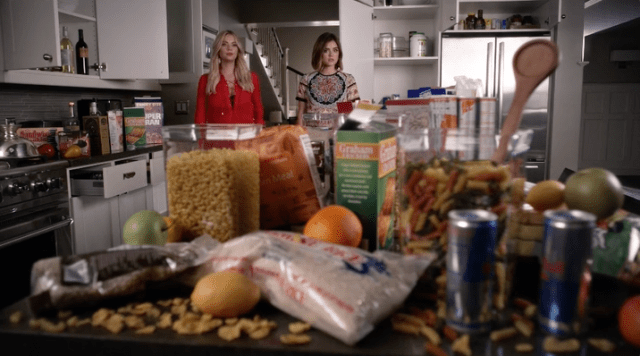 Mary Berry would not be happy about our workstation being this messy.

After Ashley leaves, Hanna calls up Aria, and they ransack Ashley’s place. Dumping out cereal boxes, pouring bottles on wine on the floor, throwing coffee canisters against the wall, tipping over the refrigerator, smashing plates, turning on the water and stuffing the sink with rags and leaving the whole place to flood like the Wet Bandits from Home Alone. 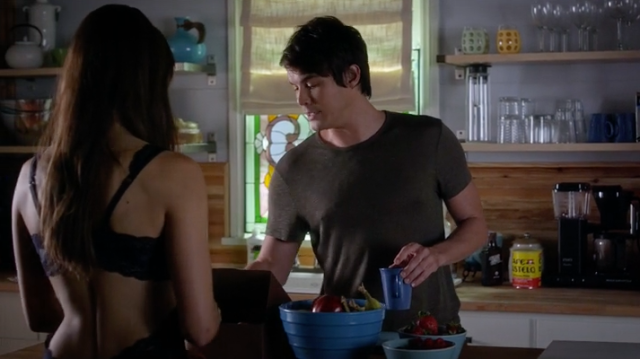 Fun fact: Spencer and Riese’s fiance, Abby, drink the same coffee! (I see you back there, Cafe Bustelo.) 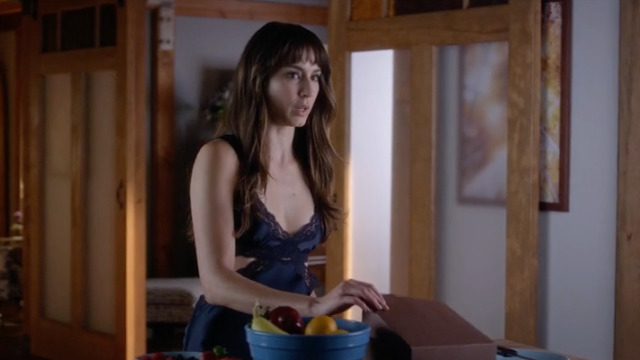 I just tried to figure out how to spell “lingerie” to caption this photo properly, but Google thought I was trying to find “lion king songs,” so.

What is Caleb doing today? Well, firstly he’s sexing Spencer. Feeding her coffee and sexing her and sending her out into the world to meet with someone named “Gil” at the Rosewood Grille. She doesn’t remember putting the appointment in her calendar, but it’s there, so she’s gotta go! Like when your GPS tells you to drive into a lake! Gil does not show up at Rosewood Grille, but Toby’s fiance does. Yvonne. Beautiful Yvonne. She and Spencer talk about politics for a little while and about being Daughters of the American Revolution for a while and about Toby’s 12-pack for a while, and also:

Spencer: Trust is hard for me. I don’t know who on my mom’s campaign team I can trust.
Yvonne: Right, because of when you were a teenager and kept getting killed?
Spencer: Yeah. Like when I went out into the real world, [inexplicable welding metaphor], and now I just don’t know how to be.
Yvonne: I know what you mean about [inexplicable welding metaphor], but, in my experience, six out of ten times, the men in this town aren’t trying to murder you.
Spencer: Good point, Yvonne. Thank you for—
Yvonne: BYE!
Spencer: Oh dear, she left her phone.