Imagine a site with everything you could ever possibly want to know about sexual consent. Guess what? It exists. ConsentEd is the most in-depth, comprehensive guide to consent I’ve seen anywhere, and I was super stoked to find out that it was put together by a group of eleven people right here in my city of Edmonton, Alberta.  Any time you or anyone you know has questions about consent, sexual violence and sex-positive activism, instead of fishing through your brain and the internet for scattered information, you can just casually say, “Hey, you should check out ConsentEd.” In fact, I think there should be “Hey, you should check out ConsentEd” buttons and posters and t-shirts. Recently I spoke with one of the founders, Nicole, about how such a great resource came to be.

“We had all been volunteering and working with this issue for some time, but we were feeling like we wanted to do something different,” Nicole explained. We got together one day last summer and started brainstorming — we looked at the world we wanted to work toward and the gaps that were out there in existing resources.”

It seems that while there are many resources on sexual violence, information on consent is limited. This is really too bad because one of the most important keys to ending rape and abuse is an understanding of consent. Nicole and the other founders of ConsentEd wanted to create a resource that would be accessible to anyone, which is why they decided to use the internet. You don’t have to live in a big city or take a Women’s Studies class to access ConsentEd; all you have to do is go online. Because of this, ConsentEd has the power to actually make a difference.

“In my work outside ConsentEd, I noticed that a lot of folks I talked to were starting to understand sexual violence, but still had no idea what a healthy relationship or healthy sex looked like,” she explained.

Having a healthy relationship starts with making sure that you’re healthy. It’s knowing that you deserve to be respected and listened to. As Carmen has beautifully written, consent matters for queer people. It is especially important because we are repeatedly told by our communities, certain politicians and sometimes even our family that there’s something wrong with the way we are — that our relationships aren’t valuable, that the way we have sex “isn’t real.”

Understanding consent is crucial to understanding how to have healthy relationships both with ourselves and with others. When we respect our bodies while listening and respecting the bodies of our partners, we validate for ourselves what is often invalidated in the outside world. To visually represent what we all deserve when it comes to sex and love, ConsentEd has launched the “I Deserve” project — a submission-based photo gallery. The photos are not specifically queer, but they speak to a universal need for respect and legitimacy.

“The I Deserve Project is a photo submission project where people can send in pictures reflecting their experiences,” Nicole explained. “The pictures are centered on one of our big themes: When it comes to the number of ways that sexual violence everyday, we all deserve better. We launched this project to give a much more personal, human voice to the ideas on our site and to reflect the diversity of experiences and voices. When you go to our I Deserve site, you see a collection of ideas and experiences that are very real and very diverse.” 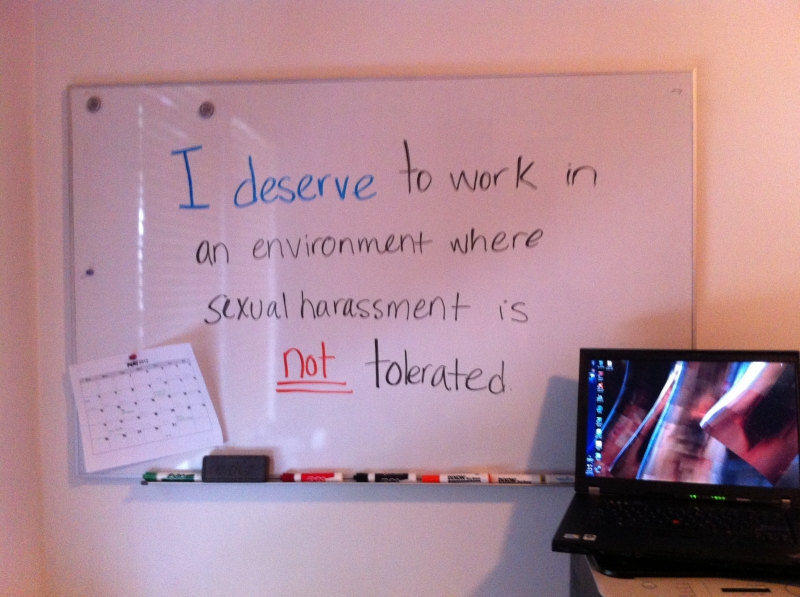 via The “I Deserve” Project

ConsentEd’s activism is not only web-based; recently, the site had a dance party during which many attendees submitted more “I Deserve” photos. Having a dance party works because even though consent is a serious issue, it’s also about pleasure. Consensual sex lays the groundwork for pleasure because pleasure happens when there’s respect, honesty, and communication.

Nicole went on to explain the barriers we face when it comes to open communication around sex and pleasure: “Asking someone what they want can be romantic, it can be sexy, it can be simple. Most importantly it communicates respect for our sexual partners and that we care about what they want and need from us. On the one hand, we are communicating all the time with our actions — so even when someone doesn’t explicitly say no in a sexual assault situation, they are always communicating no in some way — turning away, freezing, etc. But if we are just talking about healthy sex and communication… I think there are a lot of unhealthy myths about this too! Like that sex is an obligation, that it’s a condition for being in a relationship, etc. When there are so many of these unhealthy ideas floating out there, it can be really challenging for many of us to fully understand and embody healthy sex, which from our perspective, relies on consent, equality, respects, trust and safety.” 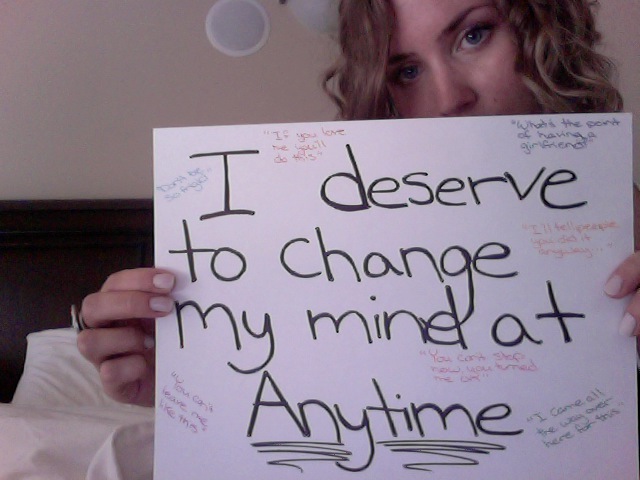 via The “I Deserve” Project

I asked Nicole about what ConsentEd is doing to raise awareness about the trust and safety in same-sex relationships, as it’s often ignored that there can be abuse and violence in same-sex couples. Nicole explained that Consent Ed wants to be as diverse as possible, and is interested in hearing more from queer people:

“I agree that a lot of the literature and resources have tended to be pretty heteronormative. I actually think that hearing more voices about what consent means for queer people would be awesome! I know that some of the other members have some ideas about where they want ConsentEd to go next, but I like the idea of asking the community ‘What does consent mean to you?’ We do try to be really inclusive in our language while acknowledging our privilege at the same time, and know that our voices are just 11 of the many that are out there. We also hope that our website can be an invitation to an ongoing conversation.”

Autostraddle readers are invited to check out the ConsentEd website and participate in the “I Deserve Project.” As Nicole so aptly puts it, “Sexual violence has our society captive in more ways that we can even realize, and it’s time to end it.”