Previously on Pretty Little Liars, Emily found out Talia has two last names, a maiden one and a married one, on account of: she’s married to a dude. Spencer continued to be brainwashed by Johnny’s mansplaining wankshite. Aria followed Mike all around town and into the woods and found out he’s leaving candy for ghosts and probably stealing people’s blood. And Hanna got accepted into a hundred colleges but couldn’t get any of her parents to help her pay to go to them, so she decided to enter a beauty pageant and win herself a scholarship. 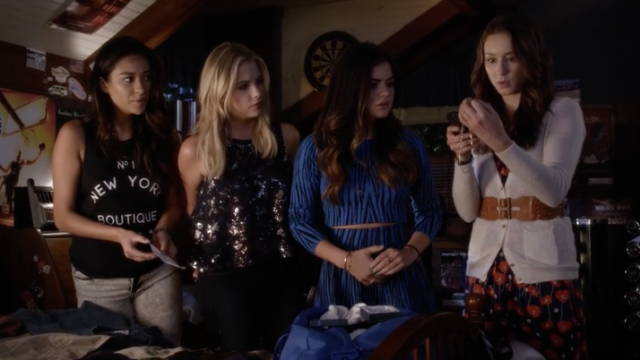 No, this can’t be. It looks like Hanna/Emily fanfic written in morse code.

The Liars are just straight pillaging Mike’s room now that Aria has come around to Spencer’s blood thief theory. They rehash the thing that changed her mind, about how she and Emily and Spencer stalked Mike down to some dive bar in the forest where he gave a package to Ali’s fake kidnapper, Cyrus. Right after he handed over the mystery envelope, they got an A-blast with a photo of vials of their blood, which seemed pretty convenient since Mike was known to be lurking around the blood refrigerator at school that very morning. They don’t find their plasma anywhere in Mikey’s bedroom, but they do find a necklace in his gym bag that — wait for it — is jeweled in morse code! I’ve been missing these ridiculous hijinks this half-season! I’m here for the Tippis and the queerness and the way this show can be the gold standard of Bechdel glory when it wants to be!

Fitzgerald Book and Candy Shoppe. Talia is on the phone with Emily’s mom, without Emily’s blessing, exchanging cobbler recipes, which is worse than when Paige tipped off the police about Alison being alive and worse than Alison pretending not to be alive, in terms of things you don’t do to your girlfriend. Emily wants to know if Pam knows about them, and Talia shakes her head no, which, again, is incorrect. Pam Fields counts the Tylenols, Talia. Pam Fields knows everything.* Well and Emily knows Pam knows. Emily also knows she’s in a real pickle here with this married woman. But her girlfriends are in jail and in college, so she’s kind of employing the “get what you get and don’t pitch a fit” method of living, which is always a mature thing to do when you’re talking about eating food someone else cooked for you, but sort of the opposite of mature when you’re choosing who gets to touch your boobs.

(*I’m working on this new theory where Pam is A and this is all an elaborate pantomime to teach Emily a lesson about not talking to strangers.) 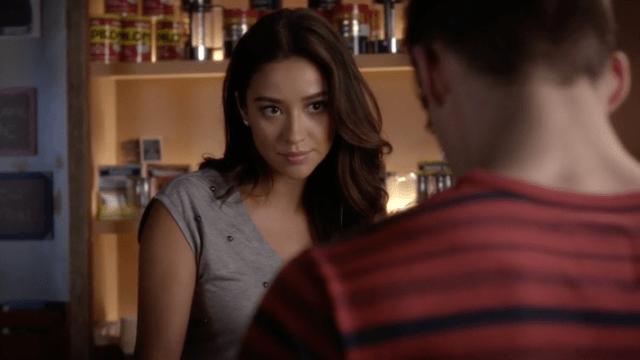 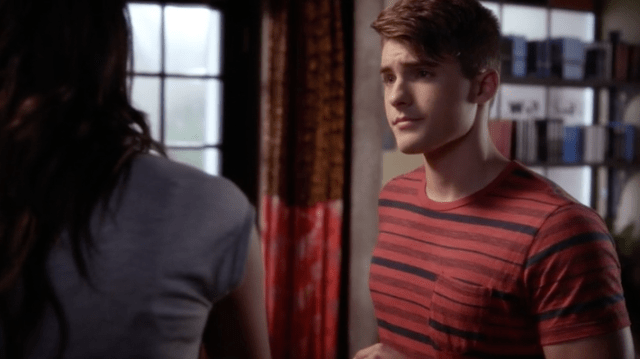 Mike comes in and orders a couple of coffees and it blows Emily’s mind! It makes her more convinced than ever that he’s a murderer! She sends out a text to the other Liars about how Mike is getting scarier, which must means she thinks Spencer is the most terrifying person on the planet. That girl has been having two cups of coffee for breakfast every morning since Pre-K.

Spencer — who is wearing like baseball pants from the ’40s and a plain white-shirt and a messy ponytail, and making my heart ring in my chest like bells on bobtails — is having breakfast at Hollis with Johnny. I know you find this nearly impossible to believe, but this motherfucker is somehow, through some feat of black unknowable sorcery, going to get even more deplorable this episode. Observe as says “Hogwarts” with full-blown contempt and then acts like Toby is a neanderthal because he has no idea what the fuck Johnny is saying when he starts talking like Luigi. “What? It’s an expression. In Italian,” is what Johnny says, after dropping some non-English adieu. Sadly, Toby does not pop him one right in his smug little jaw and be like, “What? It’s a punch. In the head.” Spencer tries to make plans with Toby, who is only on campus picking up something for Jenna, but he blows her off and glares at Johnny with murder eyeballs as he walks away. 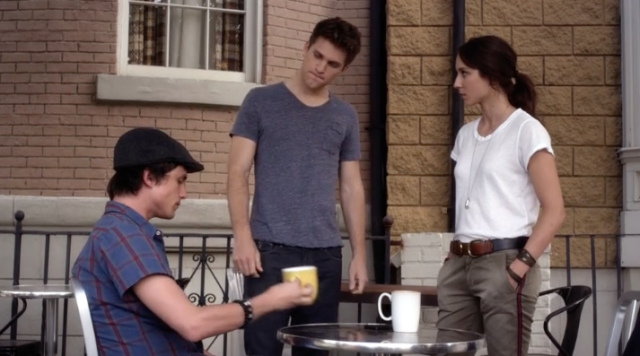 “It’s an expression. In Italian. What are you, a cave man? I can tell by the outline of your pecs in that t-shirt that the answer is yes. In Greece, you would have been a god. Oh, but not me, sir! I have shattered the very concept of god, and have embraced the shifting truth of my own holiness. Was it not Gwenyth Paltrow who said, “I heard the rock say: ‘You have the answers. You are your teacher.'”

Over at Calebzra’s apartment, Hanna explains the plan about entering the beauty pageant, but Caleb thinks it’s an anti-feminist nightmare scenario and strongly advises her against it. See, but here’s what’s great about Caleb: He listens when Hanna’s like, “The world is an anti-feminist nightmare scenario so sometimes you’ve got to figure out how to swindle the machine from inside the engine room.” He offers to solve her problem for her, with his mom’s money, and she tells him no. And so then he immediately switches gears and supports her, because he respects her ability to make her own decisions and doesn’t try to shame her into doing what he thinks is best because he’s got a dick and some feelings. 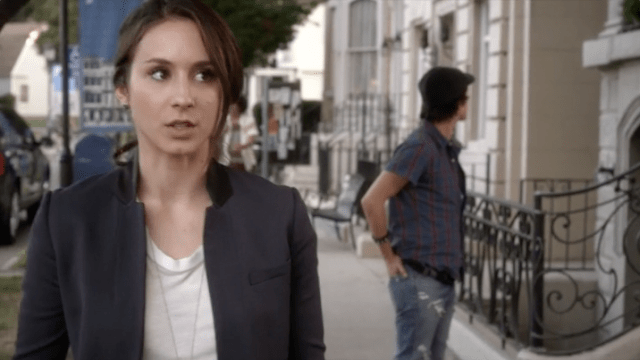 I feel like Emily and Hanna are keeping something from me. I know I’m just being paranoid, but…

Speaking of which dicks, Johnny is walking down the street with Spencer when he spots their Hollis graffiti hanging in an art gallery. He and Spencer are livid. They storm into the gallery and bang their tiny fists against the wall and start yelling at the owner about how these paintings belong to them and no one can sell them! Hollis owned the building Johnny vandalized, but the drawings on the wall are his own creative property! Johnny. God. I would rather be locked in a windowless room with no food listening to Ezra talk about being a hot dog for an entire week than get dragged into an art wanker conversation about The Ethics of Being Banksy. You make me hate everything. Get off my TV.

Aria and Andrew are studying The Trial of the Century, which: whoa! Andrew says it’s notable for being the first trial where a temporary insanity plea was successful, and that’s true, but the real deal with the Trial of the Century is it’s about how this woman named Evelyn Nesbit, who most people consider to be the world’s first supermodel, was physically and psychologically tortured and coerced into marrying this full-on sociopathic rich white guy named Harry Thaw, who murdered this other rich white guy named Stanford White, who had seduced Nesbit when she was only 17.

Thaw was a King Joffrey-caliber sadist, no joke. He beat and raped women and men, including Nesbit, and but was obsessed with female chastity. White also was into the same stuff, especially seducing and bedding underage girls. Right, and so when Thaw went to trial for murdering White — on top of Madison Square Garden, in plain view of NYC’s other richies, just shot him right in the face — the story in the press became that Nesbit was some kind of seductress, a “scandalous woman,” a “benevolent vampire.” That she drove Thaw to do what he did. 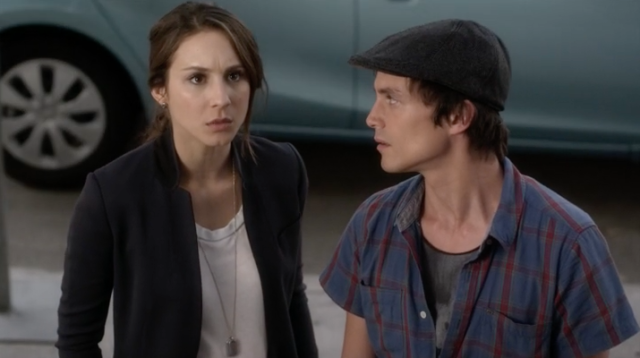 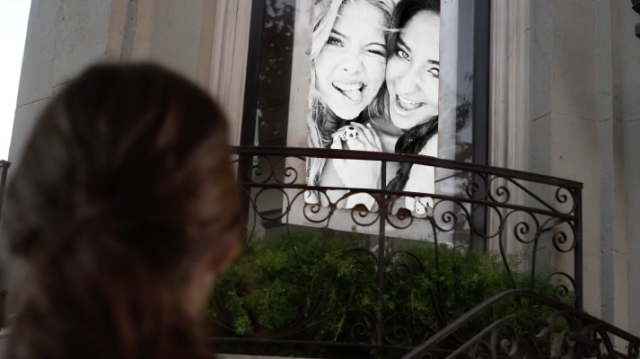 The temporary insanity defense was basically conceived by his own mother as a marketing plan because she knew it would appeal to these ridiculous patriarchal, puritanical ideals of men in America. It was seriously called “Dementia Americana.” It “encompassed the male prerogative to revenge any woman whose sacred chastity had been violated. In essence, murder motivated by such a circumstance was the act of a man justifiably unbalanced.” Justifiably driven to kill another human if he “ruins” your wife, that’s the male prerogative. And of course the press and the jurors ate the crap right up.

Thaw didn’t want the insanity plea because he truly believed he was “one chivalrous man defending innocent womanhood.” This fucker who beat the hell out of young women and prostitutes before sexually assaulting them, all over the country, this guy pitched a full-on crying, stomping toddler tantrum in the courtroom when he realized he was going to be labeled as a madman instead of a hero.

He ultimately went free, of course, and the insanity thing was struck down later, because: dollar dollar bills, y’all. And the person whose reputation and life suffered forever? Not the abuser. Nope, nope, nope. It was the abused, Evelyn Nesbit.

Talk about your Alison DiLaurentis parallels.

Man, I hope Pretty Little Liars sticks it so hard to the Thaws and Whites in the end. 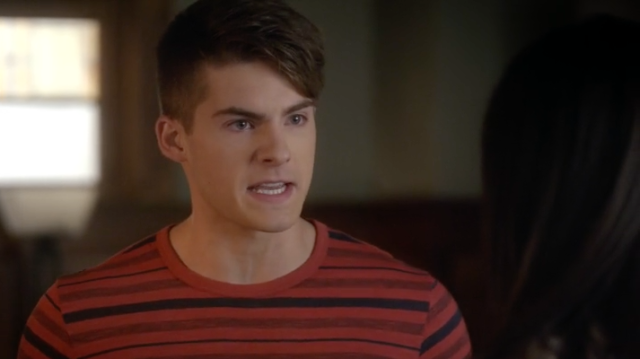 Everyone keeps saying Mona was gay! 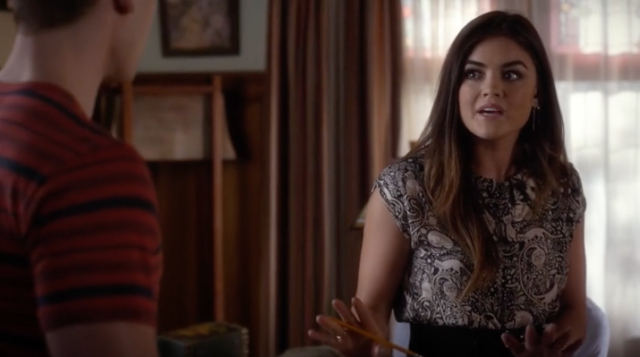 Calm down, Mike. She may have just been gay for Hanna.

What was I talking about? Oh, right. The Trial of the Century is what Andrew and Aria are studying when Mike comes clomping in with his two whole coffees, and when he realizes Aria and the Liars ransacked his stuff, he comes back out and legit threatens to murder her if she ever goes in his room again. And then he flips over a coffee table. Aria asks Andrew to use his Sports Guy status to follow Mike to the gym and peep on him to see if he’s doing anything with anybody’s blood, or coded jewelry, or even frankly steroids at this point. Andrew says yes.

Hanna has scheduled a meeting with a coach who introduces her to the wide world of beauty pageants by rapid firing a bunch of questions at her about reversing animal extinction, the decay of American infrastructure, the moral quandary of fetal genetic diagnosis, the philosophical difficulties of preemptive military action, what in the world is happening on Scandal this season. Just a lot of really complicated queries with no clear-cut answers. Hanna says she’ll work on the Q&A portion. The main thing her coach needs to know is that she can Dance. Not little ‘d’ dance, no, ma’am. Dance.

Hanna texts Emily  to tell her to cancel all her plans because they’re gonna rhumba all weekend long. Emily is like, “Finally, geez.” 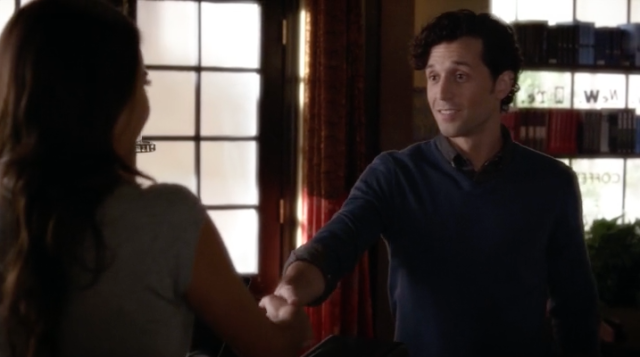 I heard my wife Talia is gay for you. 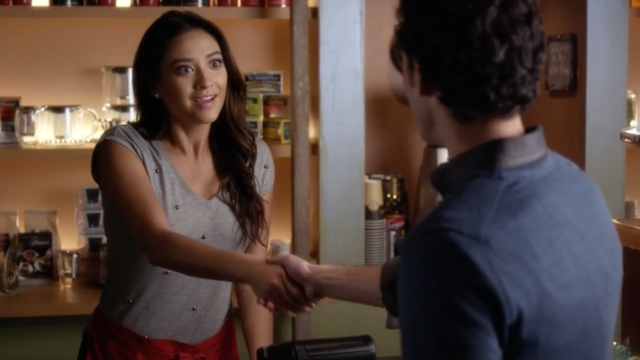 That’s not a thing.

Emily’s still working the coffee counter at the Book & Candy Shoppe when this floppy haired dudebro comes in looking for Talia. He recognizes Emily right away due to Talia’s descriptions of her as “radiant” and “entrancing” and “no seriously, man, otherfuckingwordly beautiful.” So he gets right down to the creepster business of talking about bisexuality like he’s the personification of Glee, all, “Oh, I know all about you, of course, about how Talia needs a little something vagina-shaped on the side, because of bisexuality, and I know about your bike ride and your french kissing and the way you taste like peperminty vanilla. I’m her husband forever and you’re just a blip on the sapphic radar.”