Thanks to the BBC’s axing of lesbian drama series Lip Service in mid-January, we are left looking forward to two new BBC Three dramas, Being Human and In The Flesh; shows about an interspecies, supernatural flatshare and the rehabilitation of treated zombies have replaced everyone’s favourite emotionally unstable Glaswegian ladies. As Diva magazine pointed out last month, monsters don’t pay license fees or sign petitions making this a particularly frustrating prioritisation of the apparently sexier but heterosexual undead.

Whereas our only way to stop Lesbian Vampire Killers is not to watch them or write angry reviews on Amazon, the BBC has a bit more responsibility when it comes to LGBT drama; it is publicly held accountable for its programming, both by the reports it commissions and by external campaigning bodies like Stonewall. Since everyone who has a TV in the UK pays to fund the BBC –  whether they watch its programmes or not – it has a recognised obligation to lead the way in reflecting the country’s makeup fairly. People also have a strong investment in — and campaign for the improvement of — its representations of disabled people and ethnic minorities. 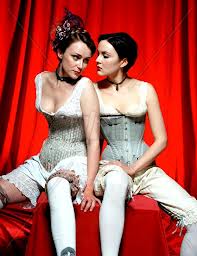 In November, the BBC commissioned an update of their 2010 report on LGB representation that calls for real change, consulting nine experts and campaigning bodies. With no petticoat-rustling lesbian historical dramas like Tipping the Velvet or Fingersmith up the BBC’s sleeves this year – let alone a sex-accented new series – this report is a refreshing recognition of how the BBC could do better. Disappointingly, the BBC have followed Stonewall, who reported on LGB representation in 2006’s Tuned Out, in excluding Trans* people from the report. Though Stonewall has a pretty controversial record on Trans* issues, the BBC has failed to explain why the report is LGB, not LGBT. Encouragingly, they’ve started an open competition for writers and actors for a TV pilot with transgender themes, suggesting that at least they see a hole in their coverage, even if they’ve shied away from discussing it publicly.

While depictions of Trans* people are mostly limited to Channel 4’s reality series My Transsexual Summer, out lesbian and bisexual women present huge swathes of British TV at the moment, as the report acknowledges. Claire Balding was all over the Olympics coverage this summer, her civil partner Alice Arnold presented the BBC Radio 4 News for twenty years, Sandi Toksvig and Susan Calman joke about being ‘the lesbian team’ on QI, a comedy quiz show. Sue Perkins is ubiquitous for munching supersize and historical snacks and for taking part in panel show, and Mary Portas is on a one-woman, spike-heeled crusade to take over the British high street and fashion industry and run it properly. Although all these women have spoken openly about their personal lives and partners and a few even have masculine-of-centre presentations, they are all white middle-aged women and apart from the always-outspoken Sandi Toksvig, most of them probably don’t read as lesbian or bisexual to casual viewers. 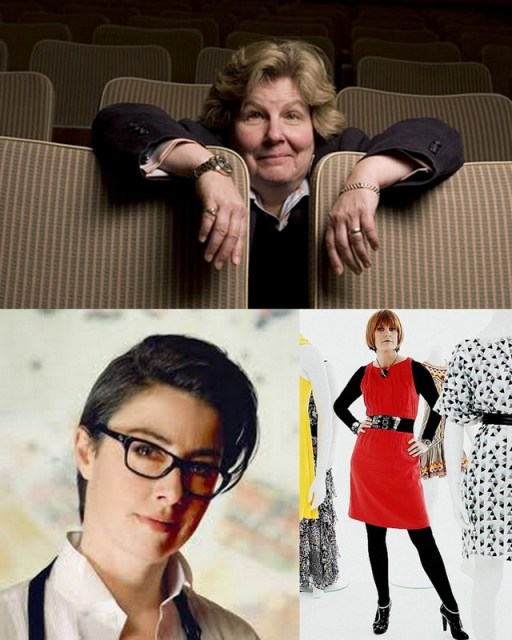 Where the BBC falls down is in integrating lesbian and bisexual characters and topics into drama, factual programs and especially young people’s programming. Skins (over on semi-commercial Channel 4) and Lip Service deserved their popularity, managing to be fun, sensitive and sexy without being completely unrealistic (although Frankie’s systematic de-queerification/surprise personality transplant lost this Skins fan along the way). But since they’ve left, nothing new has come along to fill the gap. Budget cuts to BBC drama provision last year aren’t exactly encouraging for the future. The report on BBC LGB coverage is measured, but fairly damning, saying that lesbians are “relatively invisible compared to the level of coverage of gay men” and that “Gay and bisexual men seem relatively happy with the TV they consume…lesbian and bisexual women perhaps less so.” Perhaps most telling, one of the study’s key findings was that “representation is still so unusual that it stands out when it is included.” None of this is news to anyone watching BBC programmes, especially their drama and factual programming. Two years after the first independent report, the main improvement is in the public appetite for, rather than the provision of, LGB characters (which, it’s notable, only 15% of the BBC’s independently-run audience reaction panel Pulse are uncomfortable with, down from 19%). Excitingly, the BBC has been asked to be “more creative and bolder…taking care to steer clear of stereotypes.” Yet after the complaints about Lip Service’s brave forays into topless sex scenes before the first episode’s opening credits, and its second series ratings drop, it might be a case of once bitten, twice shy.

Another of the BBC’s findings – that there should be more LGB representation in children’s television – is worth exploring. Doctor Who, although not really a children’s programme, is well-known for having LGB characters fitting naturally into storylines thanks largely to Russell T. Davies, who also wrote the gay drama series Queer As Folk. Steven Moffat, who’s drawn some controversy with his representations of LGBT characters in Sherlock, especially Irene Adler, is continuing that tradition. Sexy Silurian lizard lady Madame Vestra and her partner Jenny were on at tea time on Christmas Day and judging by the handful of complaints received, shocked approximately no one. Extra encouraging, though, was a well-thought-out lesbian storyline last Friday on The Dumping Ground, an after-school children’s drama about kids in care. 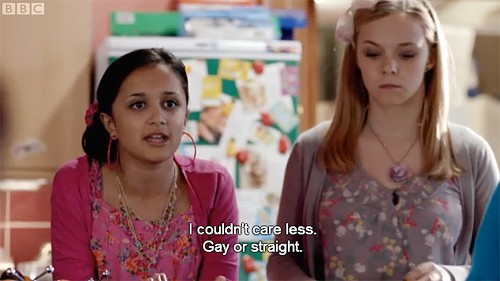 The storyline may focus on a same-sex couple wanting to foster a character, but their relationship is really just a backdrop to action. They’re shown as warm and loving to each other, but the issue is whether Gus, who has Asperger’s Syndrome, can trust them, and handle the change of moving. The other childrens’ reactions are realistic but not nasty; one says that “they’re not proper parents,” and another asks, “people are already down on us because we’re in care – what will they say when they realise we’re living with lesbians?” One boy goes out of his way to criticise the couple, falling out with his sister for trying to put Gus off leaving, but is later shown to be feeling rejected after being abandoned by his parents. The childrens’ argument adds up to the idea that it is better to have a family than not, and since none of them have experienced a normal family, they can’t know whether you need a father or not – a mature conclusion that doesn’t heavy handedly say same-sex parents are better or worse, but admits that no one really knows for sure.

And that’s precisely why people shouldn’t worry about LGBT characters in children’s TV. Children will accept them and move on because they are adults, and adults are fundamentally a bit boring compared to aliens or pirates or magic sea sponges. The BBC may have axed Lip Service, and have run out of Sarah Waters books to dramatize (bar the lesbian-free Little Stranger), but they do seem to be making a commitment to representing LGB people and admitting that they could do better. Under budget pressures, specifically LGB-themed dramas look like they’ll get cut and fragmented into characters and episodes scattered across mainstream drama, reaching more people, even if they’ll touch fewer.

Alice has written 1 article for us.