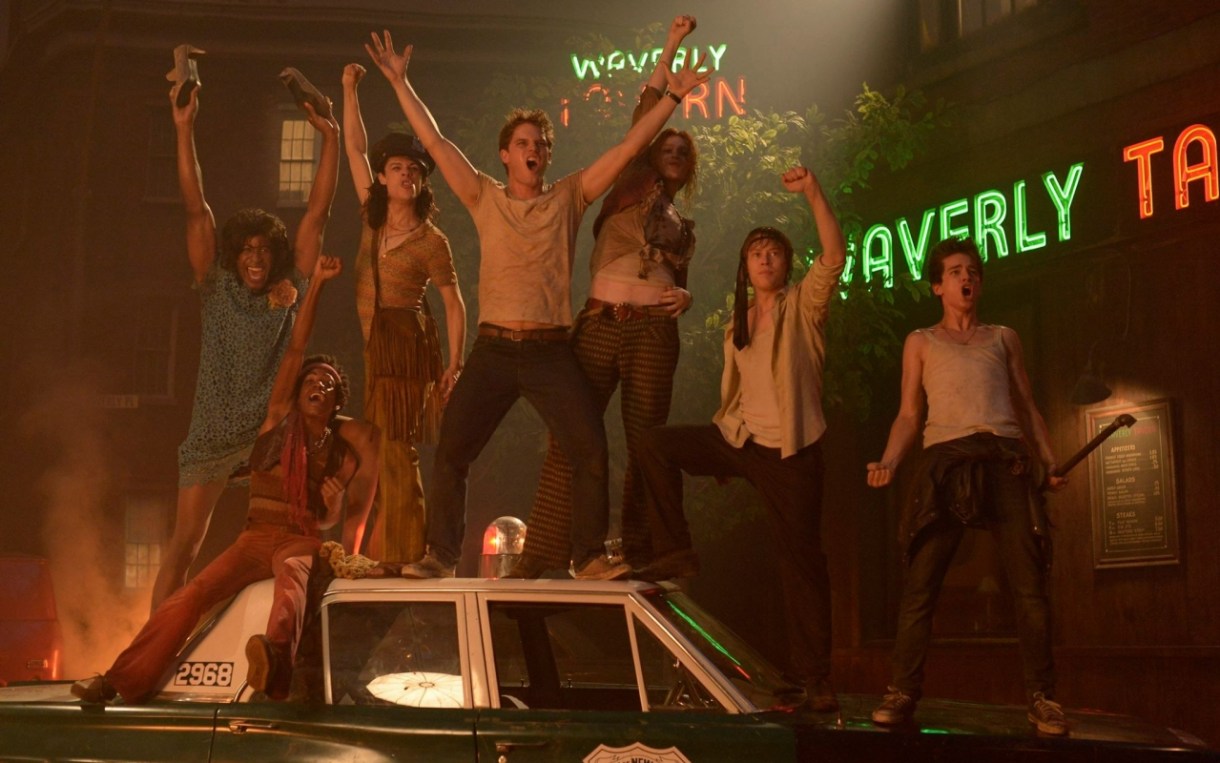 + Remember when you saw the Stonewall movie trailer and read our interview with Miss Major and were pretty concerned that this movie was gonna be disappointing? Remember how the contributions of women — namely, trans women of color and also lesbians — seem to be entirely absent from the film? (Look out for an upcoming article on Autostraddle about Stormé DeLarverie, a butch lesbian who played a key role in the movement.) Well — you were wrong. If this scalding Vanity Fair review is any indication, it’s actually even worse and more guilty of erasure than you imagined in your wildest nightmares! From “Stonewall Is Terribly Offensive, and Offensively Terrible“:

Stonewall is perhaps even worse than some feared it would be—more offensive, more white-washed, even more hackishly made. It’s so bad that it’s hard to know where to begin a catalogue of the film’s sins. Maybe you start with its leering, bizarrely sex-shaming tone, which has poor cherubic baby-hunk Danny (Irvine)—kicked out of his house by his football-coach father after he’s caught giving the quarterback, yes the quarterback, a blow job—being preyed upon by gross, sweaty, teen-hungry older men upon arriving in New York. In two different scenes, Danny cries pitifully as one of these horrible, horrible men (one of them in grotesque drag) fellate him. (He needs the money, and is then turned out against his will.) Danny shuns the advances of any younger man who isn’t strapping and white, particularly those of Jonny Beauchamp’s Ray/Ramona, a queer Latino street kid who has a big crush on pretty-boy Danny.

Rather horrifically, it’s taken as a given, an implicit fact, that Danny could never, ever fall in love with, or have sex with, someone like swishy, gender-fluid Ray. No, no, people like Ray are meant to forever pine in the shadows for American godlings like Danny.

Andrew O’Hehir at Salon.com on the “ludicrous white-savior narrative”:

To pretend that the Stonewall uprising reflected no political consciousness, and no sense of the historical moment, does that fearless, reckless resistance movement no favors. It’s like saying that Rosa Parks was a tired lady who decided she’d rather rest her feet.

Gawker on why there aren’t enough bricks in the world to throw at Stonewall:

In the movie’s production notes, Emmerich notes that Danny is also “straight-acting,” which is a term that I can’t believe any gay man uses anymore, much less a gay man who’s taken it upon himself to teach the world about a pivotal moment in gay history… Emmerich’s framing of “straight-acting” as a positive thing for a gay man to be tells you everything you need to know about the director’s lack of competence as a community leader. He consciously watered down queerness to appeal to the masses, who are still homophobic at heart but perhaps will be less so if only they’re presented with the right kind of gay person.

Yet it looks like the “relatable” narrative worked embarrassingly well for David Rooney at The Hollywood Reporter:

If the resulting drama, Stonewall, seldom escapes its cliches or cookie-cutter characters, it also recounts a political origin story in relatable, often affecting terms that should connect with a young LGBT audience curious to know more about those who paved the way toward equality and social acceptance.

While Peter Debruge at Variety also seems absolutely comfortable with Ray’s characterization and other tokenized representations:

There are boys in girls’ clothes, men openly flirting with men and predatory old trolls with seemingly insatiable sexual appetites — the latter intimidating enough to the adorably naive Danny that he needs rescuing by resident scare queen Ray, AKA Ramona (Jonny Beauchamp), a flamboyantly effeminate Puerto Rican with long hair and handmade ladies’ costumes. Danny may be the audience’s uneasy proxy in this wild, full-color picture, but Ray serves as both its heart and soul — a charismatic ambassador for the travails and triumphs the multi-culti trans community faced at the time.

After last week’s article about how this winter’s slate of queer and trans films manage to be mostly about straight people, it’s more obvious than ever that representation on its own just isn’t enough — we need to focus on quality over quantity. (Will this stop me from watching Freeheld forty times? It will not. I AM STILL SO EXCITED FOR FREEHELD.)

+ On the upside, you should see Grandma! It’s a really good movie! At Buzzfeed, some talk on how Lily Tomlin proves we need more older gay women in film.

+ Over the last decade, diversity in film has absolutely not gotten better at all in any way.

+ Brie Larson in talks to play Billie Jean King opposite Steve Carell in Battle of the Sexes.

+ Fall television season is finally here! Senior Editor Heather and Crew will be covering all the new shows in her now twice-weekly Boob(s on your) Tube — these will be epic productions that’ll include mini-recaps from a bunch of different writers. I really implore you to tune in for this because there’ll be a lot to talk about this year. So I’m not gonna get too in-depth with television news here since there’ll be more tomorrow, but, briefly:

+ Scream Queens debuted last night, and Flavorwire says that “when Scream Queens is good, it’s fantastically entertaining in a tweet-worthy way that’s also reminiscent of the always-great Heathers. When it’s bad, it’s obnoxiously groan-worthy frustrating.” Flavorwire notes the presence of a “predatory lesbian” character — Sam, a butch Asian-American lesbian played by out actress Jeanna Han who AfterEllen suspects won’t make it past episode two. In honor of Scream Queens and the upcoming American Horror Story: Hotel, Vulture has written the resplendent “10 Characters in Every Ryan Murphy Show,” in which Scream Queen‘s Sam is described (under the “lesbian of color” type) as a Kappa pledge “obsessed with political correctness” who they call “Predator Lez.” Never change, Ryan Murphy. Never change.

+ Empire‘s second season starts tonight and everybody is so stoked. In anticipation, NPR gets into The Tao of Cookie and OkPlayer talked to MC and songwriter Bre-Z, who is playing a lesbian character, Freda Gatz, about her role on this much-anticipated season:

OKP: A lot of fans of the show appreciated the storyline of Lucious’s son Jamal Lyon– a gay musician wanting his sexuality to be irrelevant to his talent and his personality. Is Freda’s sexuality as a lesbian central to her storyline?

Bre-Z: I don’t think so, it’s just something that is. Between (Jamal Lyon & Freda Gatz’s character), their sexuality is not who they are.  And I feel like that goes for anybody. None of your sexual likenesses are displayed in public view whether you’re with a man or a woman or the same sex. What you do in your bedroom is your business. There’s no need to make a spectacle of it, but you do have to acknowledge that it exists and treat people accordingly, and not be hateful and not a bully or taunt people because they may not walk in the same shoes as you do.

+ I Am Cait has been renewed for another season. Maybe this time around they won’t edit everybody within an inch of their actual lives and feelings!

+ Azealia Banks says it’s okay for her to use homophobic slurs because she is bisexual, her brother is trans, and her employees are all gay men.

+ Cara Delevingne says that one day when she has time, she will find out where all the paparazzi men live and camp outside their house with her friends armed with cameras so they can feel like an animal in a zoo, just like they make her feel.

+ Speaking of Cara, Hannah Jane Parkinson at The Guardian saw Cara and St.Vincent at a fashion show and would like to celebrate that “at last, celebrity women in lesbian relationships are no big deal.” Next up: making it “no big deal” for non-celebrity women!

+ It’s merely two days until Julia Nunes‘ album “Some Feelings” debuts on iTunes and I hope you’ve already pre-ordered your copy because it’s SO GOOD. It’s so good, in fact, that I’m actually attempting to write a thing about it even though I’ve got no idea how to write about music and can’t make fancy musical sentences like Stef and Crystal can. Anyhow — today, Hello Giggles has blessed you with the debut of the music video for “Don’t Feel” and a very cute interview.

+ “Ryan Adams’ sad-bastard overhaul of 1989 works as well as it does — and to be sure, it doesn’t in some places — because Taylor Swift, for better or for worse, is the most earnest pop star of our time.”