Welcome to your weekly Pop Culture Fix, which contains all of the pop culture news you will ever care about, ever, for the rest of your life. It’s all right here. 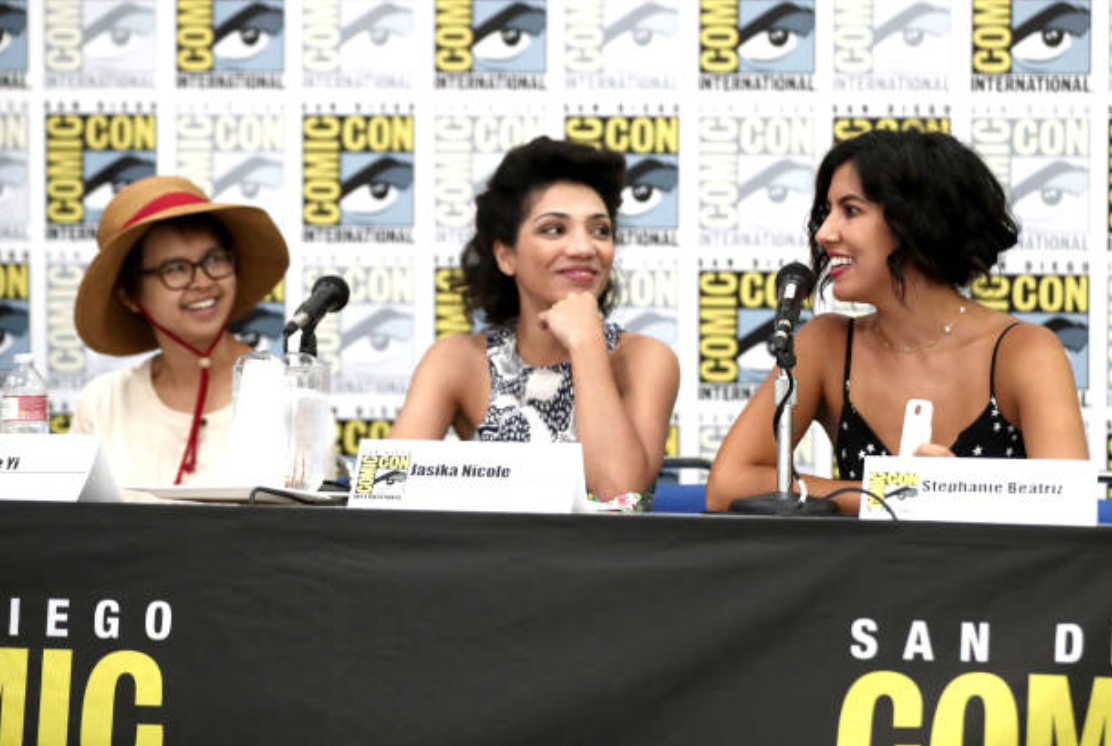 DANGER AND EGGS PANEL OF QUEERDOM

Comic Con happened in San Diego last week, and we were not there because we are busy and poor! But, luckily, lots of other news outlets WERE there and they wrote about their experiences on the internet for us to process here together.

+ I was quickly drawn in to this week’s SpoilerTV Roundtable, which recapped highlights of the conference and eventually came around to the question, “OUAT and Riverdale announced te arrival of new LGBTQ characters and stories. Is it really necessary to “ANNOUNCE” them? And does it feel a bit like baiting?” Responses ran the gamut, and here’s one that gave me pause:

Shows should stop doing this and let us find out for ourselves about these characters. It’s better if we’re surprised and not expecting it – more often than not this will lead to us enjoying the story more anyway. Now that we know we’re going to have pre-conceived notions and ideas about these characters which will bias how we feel about them already. This can be egregious if put in the wrong hands – and since OUAT and Riverdale already have reputations for having poorly done storylines and characters of this kind it’s not going to add anything good. I’m not surprised that these shows would announce these characters like this, but I’m annoyed nonetheless. I hope the storylines are handled well, that’s about there’s left for me to say.

It’s true that nothing compares to a character’s queerness revealing itself to you as you watch with no prior expectation at all — for me, this happened with Santana in Glee, Tara in True Blood and Annalise in How to Get Away With Murder, among others. Of course, for me the joy is twofold: I’m thrilled ’cause I like queer women on TV and because I know I can break the news on Autostraddle to y’all, which makes me feel like I am doing a solemn and important duty for my community. My second-favorite way to find out is through extensive internet sleuthing because again; important duty for my community. Third-favorite way is from y’all — when you tell us in the A+ inbox or twitter or email or the comments to check out this or that show that you’ve just had my #1 experience with. Those ways are all great ways. Finding out from a GLAAD report is pretty good, too. Finding out from a Comic Con panel? Eh.

+ Supercorp: Supergirl’s Jeremy Jordan did an improv recap of the season in song, during which he insisted that when it comes to Supergirl and Lena Luthor, “They’re only friends! They’re only friends! They’re not gonna get together! They’re only friends.” The entire cast laughed and it kinda felt like when you walk in on your friends talking shit about you? Then Jeremy Jordan apologized, but it wasn’t really an apology, it was just him digging himself a deeper grave. Good job everybody! Also man, Chyler Leigh has consistently been such a genuine LGBT ally and she missed ComicCon because of a funeral, and this is what she had to come back to at the weekend’s end.

+ Riverdale: Ottawa-born actress Vanessa Morgan will star in hit series Riverdale.Vanessa Morgan’s character Topaz came out as bisexual in the comics and will be exploring her “sexual identity” on the show.

One of the show’s franchises is love. This iteration is reflecting the world today. It will not be anything more than just one of other love stories that are happening. I don’t think it’s an arc, it’ll be a character who is gay and that’s who they are and they exist in the world. They don’t have a sign that says ‘special episode.

+ Star Trek Discovery Gay Romance: Anthony Rapp and Wilson Cruz Set To Make History Okay I know this is men but ANTHONY RAPP AND WILSON CRUZ ARE GONNA BE GAY LOVERS ON A SCREEN!

+ The Young Justice: Outsiders, Revealed – Could This Be Their First Gay Member?

+ Q & A with World of Wakanda’s Roxane Gay

+ HiFight Club’s 30-second pitch, via our very own Carly Usdin: “Empire Records and Sailor Moon and made gayer and put in a blender.”

+ Here is your Black Lightning trailer

+ Here is your The Defenders trailer

+ Here is your Stranger Things trailer

+ In Glamour Magazine: ‘The Bold Type’ Finally Gave Me a Queer Coming Out Story I Could Actually Relate To.

+ Queen Sugar has been renewed for a season three! Oprah’s stoked: “I’m so proud of Ava and her ability as a filmmaker to challenge the status quo and push for inclusiveness onscreen and behind the camera. I love, love, love the work we have been able to create so far. I am looking forward to developing many more meaningful projects together.”

+ IF I HAD A PENNY FOR EVERY TIME I ASKED MYSELF THIS QUESTION: Is Willow Smith Starring In The TV Series Based On RuPaul’s Life?

+ Australia’s first openly bisexual The Bachelor contestant, Adelaide’s Natalie Holmberg, talks about Matty J and being on the show

+ Our very own Carly Usdin is the showrunner for this new webseries on Newform called “The Thread” which you can watch yourself for free on @go90 right now!

+ Nisha Ganatra will direct Margaret Cho’s TNT Pilot, which is inspired by “Cho’s own history of drug use” and “follows two extended, dysfunctional Korean-American families who share the same patriarch [and] must come together after tragedy strikes. As it turns out, the most reliable person in both families is the one who just got out of rehab.”

+ Why won’t Game of Thrones give LGBT characters like Yara a break?

+ Rachel Maddow’s Ratings Juggernaut Is Not Slowing Down

+ Look! It’s a new trailer for One Mississippi!

+ Professor Marston & The Wonder Women, directed by Angela Robinson, features a thruple that contains two ladies and other cool stuff

+ A same-sex kiss was apparently cut from Disney’s “Descendants 2,” and fans aren’t happy

+ I Saw Girls Trip In A Theater With Like 17 Million Black Women There And Now I Have Thoughts About That Experience!

+ Girls Trip Shows Yet Again that movies starring Black women can crush at the box office.

+ Also if you haven’t already watched this, THE TIME IS NOW: Tiffany Haddish Said “What Had Happened Was” During Her Will and Jada Swamp Trip Story and Now I’m In Love

+ If the world doesn’t explode between now and then, Wonder Woman 2 will debut December 13th, 2019.

The story follows a rabbi’s daughter (Weisz) who returns to her Orthodox Jewish community in Hendon, London following the death of her estranged father. While there, she rekindles a romance with a former friend (McAdams), who just so happens to be married to her cousin. Alessandro Nivola also stars.