Did you see Glee? Oh cool, me too. I’m gonna write a recap here and all, but I thought maybe y’all might have a feeling or three about tonight’s ep? 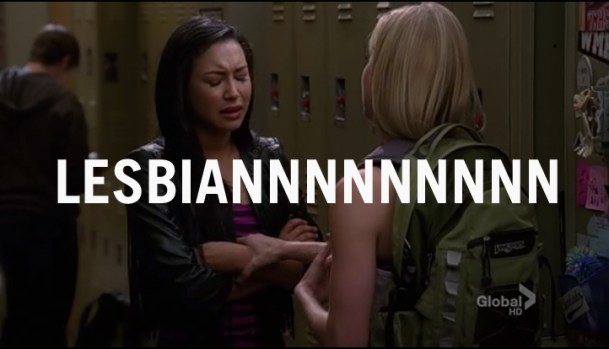 Also I know this is weird, but I personally relate more to Santana’s speech about how she came to realize her sexuality/feelings for Brittany or whatever than any other coming outish scene I’ve ever seen. And trust me, I have seen all of them. Look. I have my character now. Sometimes I think of lesbians popping up on the television like Pac-Man or something.

[Also a disclaimer: Yes, we’re aware Santana can’t be “labeled” as a lesbian and isn’t necessarily a lesbian but fuck us in the ear if we can’t employ hyperbole because it’s more fun that way. Anyhow, she’s not a real person — she’s a character. We can feel however we want to about her because she’s not real and therefore our opinions of her will not impact her life because she’s not actually alive. It’s much funnier to say SANTANA IS A LESBIAN than it is to say SANTANA LIKES BRITTANY, BUT DOESN’T WANT TO BE LABELED]