Queer teen homelessness has been a problem for quite a while now — just ask the homeless queer youth who have been frequenting shelters, halfway houses and the streets for decades for lack of a better option. Kids have been kicked out of their homes for being gay or trans for as long as kids have been coming out (or unintentionally outed) (or not out but perceived as disobeying gender norms). That’s not news. What is news is that it’s starting to seem like queer teen homelessness is finally making the news. 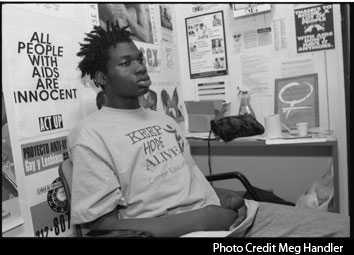 There are quite a few organizations meant to support queer youth who need homes and support, like the Opening Doors Project or the Ali Forney Center, but they’re largely by-the-community-for-the-community. The actual system put in place by the government meant to help homeless teens often fails queer youth, as Brian Dixon’s story from 2011 indicates. Many resources for homelessness are religiously affiliated, and sometimes don’t accept queer or trans people, and people who are non-gender conforming or trans are often in physical danger in gender-segregated temporary housing. As pervasive as this problem is — up to 25% of queer youth are at risk for homelessness — there’s very little mainstream media recognition of it. Back in June of 2011, Obama’s administration gave millions of dollars to start a pilot program meant to aid and support queer youth in LA’s foster care system. It appeared to go largely unnoticed.

But in January, when Obama specifically included queer and trans people in his public housing initiative and sent his Secretary of Housing and Urban Development to speak at the National Conference on LGBT Equality, it became harder to ignore. It wasn’t a signature on a memo agreeing to send a check that the average American would never even hear about; it was a public statement meant to be heard. And now the Wall Street Journal is saying homelessness is “the next battle for gay equality.” If awareness is what it takes for a solution to the fact that between 20 and 40% of homeless youth are queer even though only 5% of young people overall identify as such, then maybe we’re on the way to winning “the next battle for gay equality.”

If people are talking about gay teen homelessness, then maybe enough people will know and care about it enough to make a difference. And if people are talking about gay teen homelessness, it means that they’re talking about the causes that matter to our community that are less popular to support. Homelessness is an issue that in any community, the queer one included, disproportionately affects marginalized people and groups. So if people really come to care about homeless gay teens, it means that they’re willing to care about more than gay marriage or cute pictures of weddings at city hall. It means they have to start caring about queer kids of color, queer kids who sometimes have to resort to sex work or “survival sex” to feed themselves, queer kids who are gender non-conforming or trans.  It’s possibly a lot harder to talk about, but it’s a conversation that America needs to be able to have, for their own sake and for the sake of kids whose lives are at risk every day. And maybe we’re starting to see that happen.