Little otters, I had some trouble getting my hands on some proper screencaps this week, so I’m light on pics by heavy on love.

Previously on Orphan Black, Rudy shot ol’ Seth in the face when he wouldn’t stop glitching. Helena had a tea and mango party with sweet Pupok in the bowels of Castor HQ. Cosima leveled up her Sass Master game trying to dig up the original Leda genome from the latest dubious doctor controlling Dyad. Alison and Donnie bought a pill-pushing business and renamed it Bubbles. And Sarah sent Kira off to meet Daenerys Targaryen, and maybe help her calm down those angry teenage dragons of hers.

Well, Rudy did not clean up the mess he made when he gunned down his brother, so Sarah and Felix are tasked with dragging his corpse upstairs and into the bathtub and trying to figure out how to get rid of it. Through some basic trial and error, Sarah has discovered that the first thing is you need to dig the hole deep enough that the rain doesn’t uncover the body and send it rolling down a hill and into a rock quarry. Felix is pretty sure disposing of dead bodies is one of S’s specialties, but Sarah still hasn’t forgiven her for selling Helena to Paul, so she doesn’t want her help.

You know who else’s help she doesn’t want? The help of the cops. So it’s too bad when Art shows up banging on the door and pushing his way past Sarah into the loft — grabbing her waist and hips in such a way that made me jump right up off the couch and shout, “NU UH!” — and following the blood trail right to the dead body.

Felix has one idea, and it’s that Art could just leave and pretend he didn’t see anything. Art’s not really feeling that plan. He poses it like it’s the ethics of being a cop, but honestly, I think Art is just bored. It’s a pretty big adrenaline plummet from investigating a clone conspiracy to the next most brutal thing in Canada, which is like people not use their turn signals or not saying “thank you” emphatically enough to the checkout clerk at the grocery store.

They Skype Cosima so she can charm and/or bamboozle Art into forgetting about the dead Castor in the bathtub. It totally works.

Mark and Gracie are still in that Motel 6 in Nowhere. His arm is all bandaged up now on account of he burned off his Castor tattoo in the bathroom with a blowtorch the other night, you’ll remember. Gracie’s not in the room when he wakes up, so he grabs his gun and assumes he’s going to have to start murdering, but she was just downstairs getting some donuts.

She offers him some pastries and some coffee and also some sex, but he demurs on the last thing. Gracie’s not having that, though. She did not leave the cult compound of her youth — where her father artificially inseminated her with his and Helena’s babies after sewing her mouth shut and making her sleep alone in a horse stall — to hang out in a shady motel watching Judge Judy reruns and not fucking, okay? That is not what Gracie signed up for. So. She and Mark have sex and the whole time he’s like, “Sorry I’m not as good at this as my brothers! I always had to do spy things while they did screwing!” Because Gracie has never had sex or a subscription to HBO, she thinks this is totally normal Doin’ It talk.

Gracie: This town we’re in, one of Daddy’s old hick friends lives here, right?
Mark: Yeah. And I’m pretty sure your dad gave him some top secret science information that I need to recover and return to Mother.
Gracie: Is Mother the army? I thought you were AWOL?
Mark: Mother is more like if the Eye of Sauron breast fed the Orcs, which answers both of your questions.
Gracie: There’s not enough therapy in the world to even make a dent in our collective shit, huh?
Mark: Nope. Wanna learn how to do blow jobs? 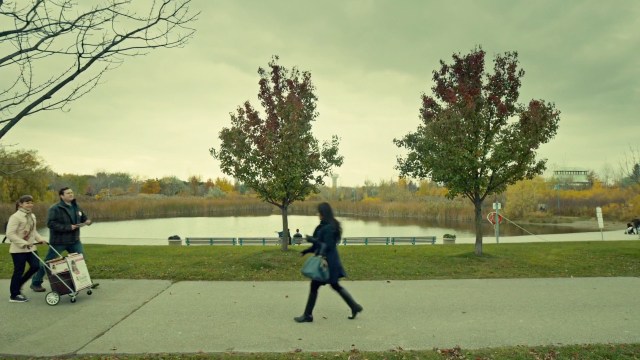 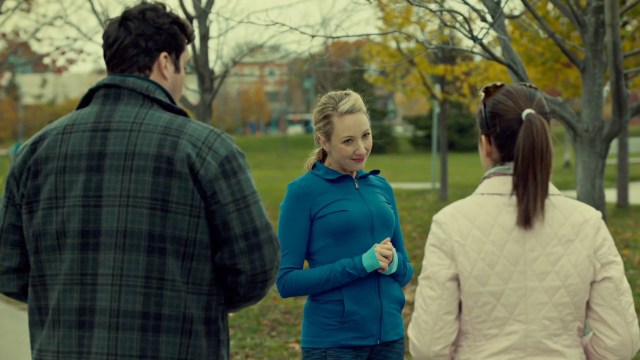 These soaps are so fetch.

Meanwhile, out in the ‘burbs, Alison and Donnie are rolling out their new business, and it is everything I dreamed and more. They’re not selling pills out of the trunk of an SUV. No, they’re pushing a trolley of artisanal body care products down the sidewalk like an ice cream truck and greeting all the Aynsleys with a smile. And inside the trolley are these Etsy-looking packages with like little kaolin clay lavender soaps and Dead Sea mud masks and magnesium bath flakes and also Vicodin. This one Aynsley is like, “I will never buy your soaps and never vote for you for the school board, due to your alcoholism!” But Alison hands her one of the packages and offers her a peek of the pills, and that Aynsley hands over her cash and her vote, and then two other Aynsleys here the news and come running up. 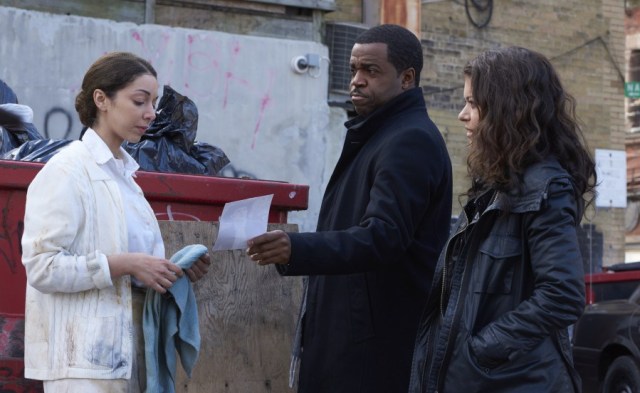 You used your real address on your Taylor Swift fan club application. 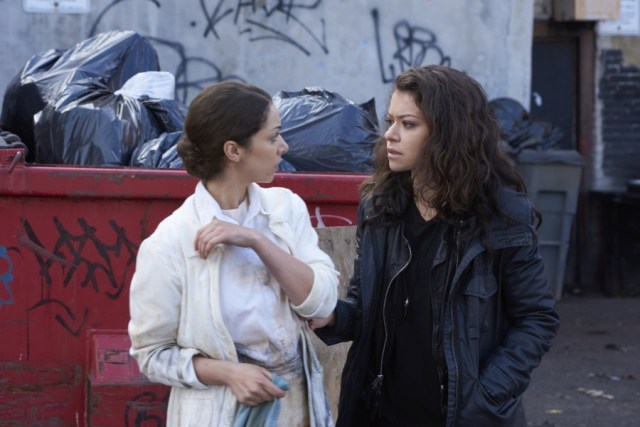 Look, you need to give her older stuff a chance. Don’t be an art wanker.

Sarah and Art track down one of the Prolethean ladies who is working as a cook at a diner now that the compound has burned to the ground. (I think the girl who plays this Prolethean is Tatiana’s stunt double.) The Prolethean’s name is Alexis. In one breath, she’s talking about how it’s a miracle of the Lord that Gracie’s dad was able to harvest Helena’s eggs, fertilize them with his own sperm, and then implant them into the uteruses of Gracie and Helena. And in the next breath, she’s calling Helena an abomination. Sarah says, “If Helena is an abomination, I’m worse!” Which I think is supposed to be a threat or an insult to Alexis, but is so weak it’s embarrassing and not at all up to the standard of burns Helena has conditioned us to believe in. Maybe Sarah can coach Helena on how forks work and Helena can coach Sarah on zingers.

After a promise from Mark that he’s going to love her and her babies no matter what, Gracie heads on out to see that farmer friend of her dad’s, and he’s as gross as you know he’s going to be. Perving on her. Confederate flag in the window. And then when he finally admits he’s holding onto some stuff for her dead dad, he also tries to extort money from her to hand it over. She tells him to keep on threatening her and see if she doesn’t call on the Lord to smite him with a fire tornado, and so he relents and hands over the box her dad left. She curtseys and bounces. When she gets back to the motel, Mark is frustrated because the only thing in the box is diagrams and notes about medical research, and he was so sure there was going to be a tupperware container of DNA in there. He gives Gracie five dollars to go buy an ice cream, and goes back to the farm to find the sack of DNA himself.

I can’t figure out how Art and Sarah know where they’re going. It seems like they’re driving around the entirety of Canada, willy-nilly, hoping they’ll find Mark and Gracie trying to hitchhike or something. But road trips are always good for bonding. Sarah figures out that the reason Art can’t stop getting himself tangled up in their clone dangers is because he feels responsible for Beth killing herself. She called him the night she jumped in front of that train and he thought she was just tripping balls, so he blew her off. Oh, and also he was in love with her. So that’s also why he can’t let go of all the faces that look like her face. Isn’t it bananas that these women have men lining up around the planet to be with them and three of them have fallen for Paul? PAUL. Like, do you want some ice cream crunch birthday cake? Nah, I think I’ll just eat a piece of bread. 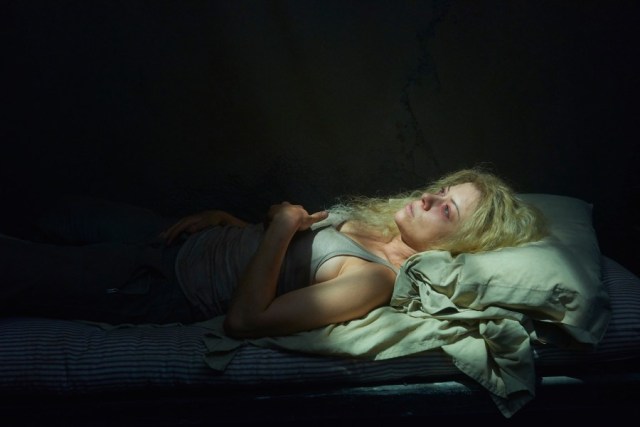 Speaking of which, Paul shows up at Castor HQ with Rudy in tow, and Mother walks right on up and wallops Rudy right in his face. He says he had to kill Seth because he was glitching so bad it’s like his brain was fireworks inside his skull, and it was the nicest way he could think to handle it.

Paul: I brought you some cigarettes to calm you down.
Mother: I’ll smoke them and maybe burn some of my sons with them. Thank you.
Paul: Rudy was telling you the truth about Seth. He couldn’t even solve a simple logic puzzle about who to rape.
Mother: Bah. Well, Helena’s fine. Her brain isn’t glitching even a little bit, so I guess what I need is for you to buy me some more time so Topside doesn’t shut us down, and Helena will grow her babies, and I’ll harvest their unicorn blood, and then I’ll cure these boys and we’ll have our army working again.
Paul: Cool.
Mother: Why do you look smug and angry, though?
Paul: This is just my face. 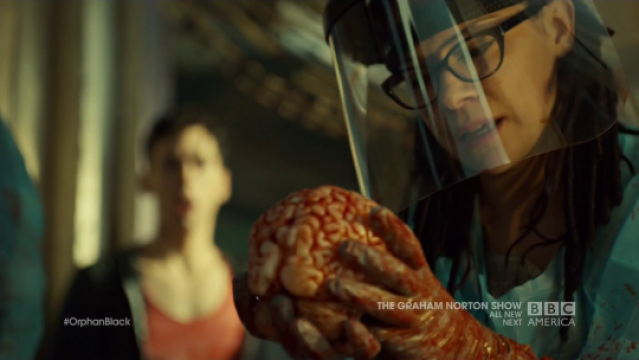 It’s so small compared to all the female brains I’ve seen.

Cosima and Scott and Felix extract Rudy’s brain. That’s all I can tell you about it because I got so grossed out I had to close my eyes and cover my ears, but I kept being like, “WHAT ARE THEY DOING? WHAT ARE THEY DOING?” to my girlfriend and she was like, “Talking about the philosophy of what makes a life and sawing open Seth’s head! Don’t look! DON’T LOOK.”