Hello and welcome to the eighth recap of the third season of Orange is the New Black, a network television beauty pageant that pits Evangelical Christian mermaids against renegade Wiccan Werewolves to decide once and for all who’s worthy of the last Strawberry-Rita.

Welcome to mystery-meat hell, snitches. Red’s kitchen is the New World Order and that means bags of pork-and-cow-guts puree have arrived on the scene. Litchfield bought them wholesale from the local school district. No word yet on if they’ll also purchase the school’s surplus of six-month-old graham crackers and hard-as-a-rock, slightly gray raisin snacks.

Marizta and Blanca slice the bags of chunky meat smoothies open and slop them into a metal pan. Beef Wellington. It’s a celebration. 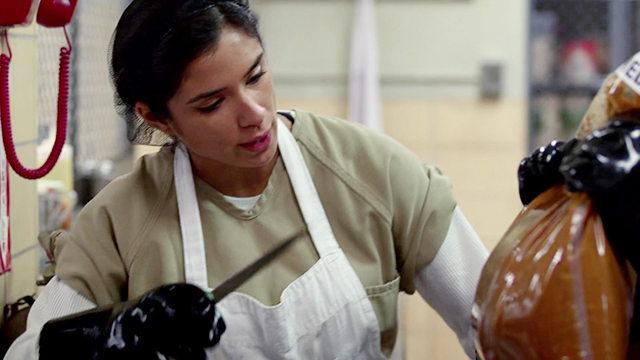 I’ve never even wanted to be this close to the insides of a Capri Sun juice bag.

Red is pissed. She was hoping they’d be able to expand the vegetable garden with grazing land for cattle. She’d envisioned the day she could sacrifice her fattened calves to the Russian Gods of War and use their flesh to feed her prison kindred. All those innuendos with Cracker Barrel Healey were for nought. 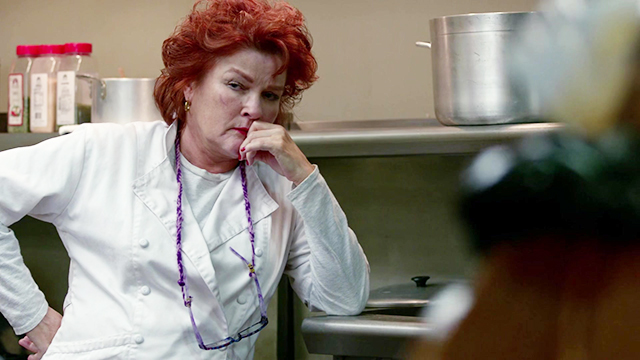 It’s time to call Hilda in the old country and add more chickens to our bounty for the talking head of Andy Cohen.

The slop makes the cafeteria rounds. It’s a symbol of what actually trickles down when trickle-down economics is served to the masses. Beef Wellington, my ass.

Black Cindy, the New Jew on the Block, greets her table of fellow kosher diners with all the warmth and affection of a sitcom Bat Mitzvah. Judaism has saved them all from having to consume Guy Fieri’s backwash meat surprise-a-rooni. 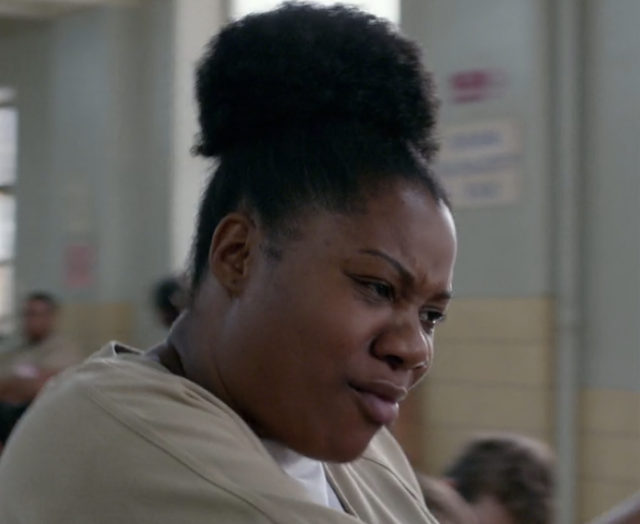 Of course whenever Black people have something wonderful, there’s gotta be some jealous fool trying to scheme on taking it away or getting their portion of it. We see you, Piper. Can Jewish Black Cindy live, y’all?

Morello’s cool with it. Maybe one of her imaginary Jewish husbands will actually marry her and then she too can have a bowl of Stef’s vegan matzoh ball soup. 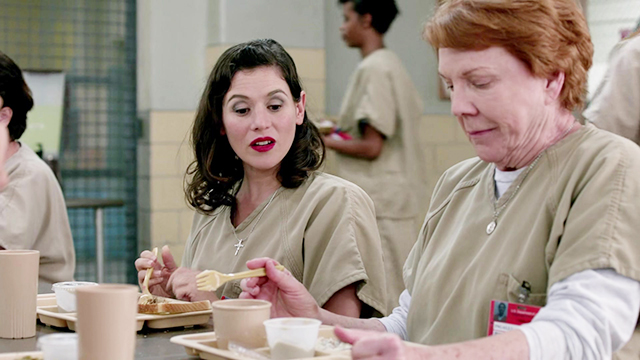 Piper, who’s never had life so hard before, wonders what Demarco is sprinkling on her meat chowder. Obviously, it’s meat-flavored Crystal Light. Piper is now jealous of both Jewish Black Cindy and Crafty-With-A-Flavoring-Packet Demarco. 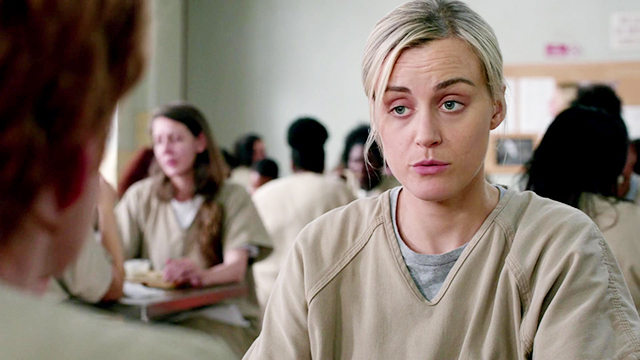 If a white girl wants to wear corn roads, she should be allowed to be as on tweak as she wants to be.

Listen, JBC might be switching religions but she’s not one of those Norma-worshipping nutjobs. Huge difference. Huge.

At Norma’s table of Dianetics and drag queens, all followers are holding hands and whispering, “If you can’t love yourself, how the hell are you gonna love anyone else?” over and over again. 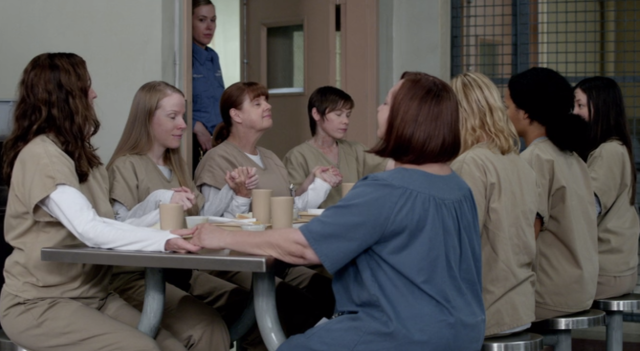 Ooh, baby, do you know what that’s worth? Oooh, heaven is a place on earth.

Poussey is so sad she’s not at that table with them. She was really hoping to lip-sync for her life and win. What’s the prize, you ask? Is it ten thousand dollars worth of cubic zirconium diamantes? Nope, it’s 30 seconds of intense eye-contact from Norma, La Santera Blanca. 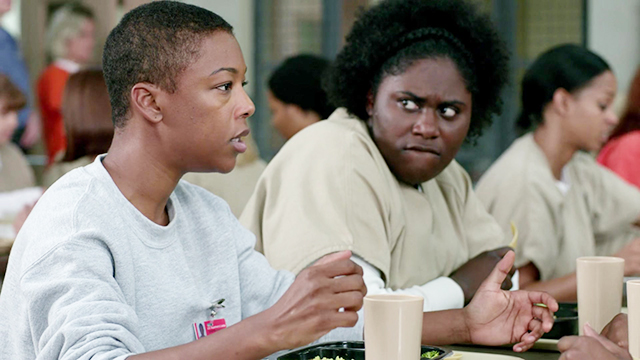 Poussey has seen the Promised Land. She’s been touched by Norma and that shit is too real for words. And if anyone has a pill for believing in this storyline, please send it my way. Actually do you have enough for all of us on the OITNB recap team? That’d be great, thanks.

In the hallway of broken dreams, Pensatucky meets one of the creepiest dudes to hit Litchfield yet, C.O. Charlie Coats. Like what kind of casting calls is OITNB putting out?

Wanted: White men who look like they could be pedophiles or serial killers or murderous clowns. Actually, if you look like you could be all three of those things, you’ve got the part. 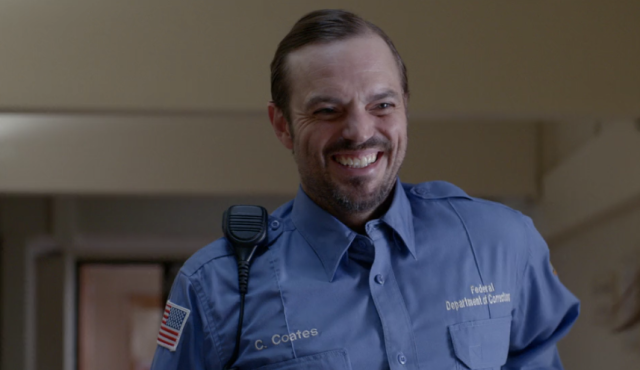 C.O. Coates is on van duty with Pensatucky but since he doesn’t know his dick from a doorknob, Pensatucky must instruct him on how to be a guard and start a vehicle.

In the edgy white-girl section of the Litchfielmd dorms, Tank Girl and Bif Naked chit chat about interior design strategies. Tank Girl wants to cover the walls in monochromatic chevron wall paper. Alex isn’t having any of that. Chevron is over, Tank Girl. It’s fucking over. 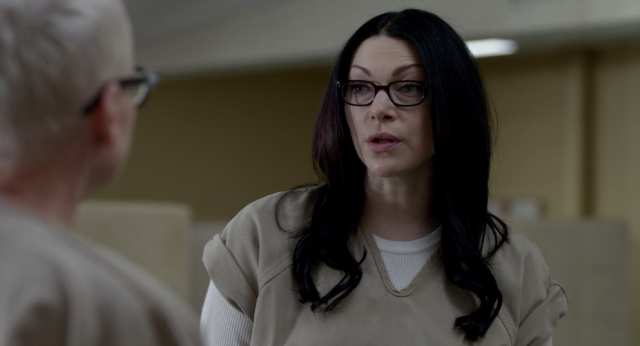 Spit in your hand, rub it on your Diva Cup, and shove it back in there. And do not ask me again, if I’ll help with insertion.

So Alex does what any good Scientologist would do and uses a beard to have a baby while jumping on Oprah’s couch. A frightened Tank Girl flees the scene. Alex is surrounded by criminals, heavy rollers even the sheisty individuals. She doesn’t trust anyone, not even a beloved comic book heroine.

Flashback to Alex crying at a funeral and could she be anymore gorgeous in the moment? No. Alex is literal perfection. She’s at her mom’s funeral, without Piper. And I swear to Jewish Black Cindy, one of the best ways to weed people out of your life is to take attendance at a funeral. Alex’s mom sounded like she was the actual best. She cared for shelter dogs, fed homeless people, and loved her drug-dealing, gal-pal-having daughter. What more could you ask for in a mom? 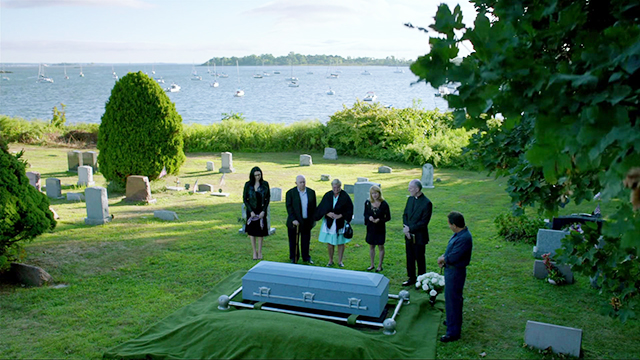 Was anyone else distracted by all the boats bobbing in the water behind them? Where is this magical marina cemetery?

Alex leaves the funeral looking so fly. Blue hair extensions hanging down her back, black leather jacket, etc. As she walks away from the funeral, Fahri rolls up in his totally neutral, not-used-for-selling-drugs and/or doing-illegal-activities car and scoops her up. Ugh, we all have that one friend who’s a complete bastard and yet somehow manages to be there during our roughest times. 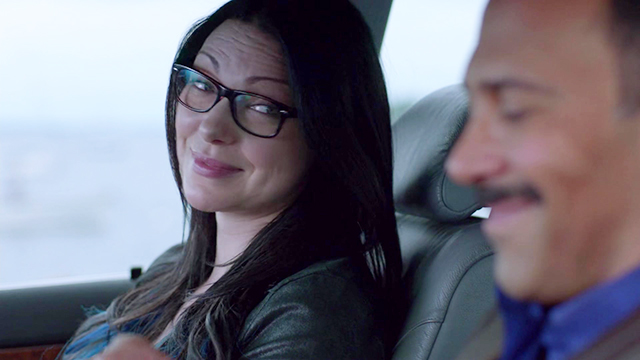 You’re neither a grower nor a shower, my friend. Sorry to burst that bubble tho.

Fahri is that friend. He’s the friend that says “fuck your ex-girlfriend” while offering you a bump of funeral cocaine. And if you’re really lucky, before you snort the coke, he’ll also put you on to a drug deal in Paris. Cuz money makes the world go round and your mom’s dead, so what do you have to lose? Nothing. Alex takes it all.