This week in Straight White Girls Dangling Lesbian Tropes in America’s Face, Jessica Lowndes has a new, platinum-ready hit single, “I Wish I Was Gay.” You might know Jessica from her role as Adrianna on the new 90210, where she once had a bisexual storyline, which is probably what gave her the idea for this stupid song.

On the surface I guess this is just another crappy pop song that I wouldn’t have liked anyway because I don’t like crappy pop songs, but when you scratch a little deeper, it’s actually an uninspired regurgitation of a handful of negative lesbian stereotypes set to the tune of a crappy pop song. This girl — the character in the song — doesn’t really wish she was gay; she wishes she wasn’t dating a total douchebag. This perpetuates a couple of neat ideas: 1) that men are default douchebags and 2) that women are gay because men are douchebags and possibly 3) that being gay is easier than being straight via not having to ‘deal’ with douchebag men.

I know you know this, darling readers, but I feel compelled to say that not all men are douchebags! And having to raise two of them in a world where their perceived default personality is Dumb Jerk is a real pain in the ass. How are you supposed to ensure that a boy doesn’t grow up to be a Dumb Jerk when that’s all the world really expects out of him? But anyway! Everyone knows that girls are gay because we like to braid each other’s hair and lick clits. 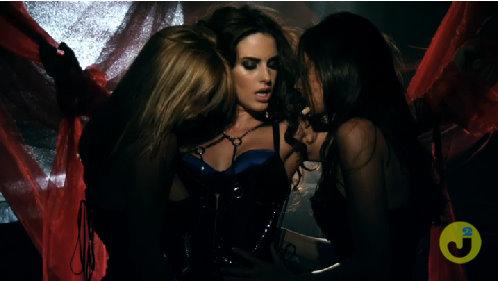 So what do you think of this song? Is the best part of the video when she shaves his thighs with what might be Cool Whip? Does Jessica Lowndes make Katy Perry sound like Mary Oliver by comparison? Have you ever drawn on your girlfriend’s face with lipstick? Was she into it? I think I’d be into it.