Please note: this post has been edited at the request of a previously featured performer. The only change made was to the recommended Crash Pad episode.

This video happened this week:

I have issues with this video, or more specifically about the way this video is being covered? Maybe? I have feelings. Lots of feelings. Watch the video, be a bit weirded out, then read my feelings below.

Not all lesbians are the same in bed. Shocking, right? This video seems to assume that all lesbians do the exact same things in bed, and in fact says as much – “that’s too many fingers, she looks fake.” There’s also an element of body shame: “I’m 24…” “She looks 44.” And it’s all mixed up with this hierarchy of queerness, brought to you by the special moment where they define “Gold Star Lesbian” in big letters across the screen. Apparently all Gold Star Lesbians — lesbians who have never had sex with a cis man before — don’t like penetration. In fact, they can’t take that much penetration because they haven’t had a cis man inside their hoo-ha. This might not surprise you, but I call bullshit.

I want to be clear that I have nothing against the lesbians presented in this video.

I do, however, take issue with their astounding sex negativity and the producers’ sweeping generalizations that these women represent all lesbians.

(0:43) “Calling her bitch. That’s not sexy at all.” – Actually, it can be sexy. If you’re into dom/sub play or power play, that can be incredibly sexy. I also suggest trying “good little bitch,” “bad little bitch,” and all the other degrees of bitches in between. If you like that. You do you.

(1:00) “These are strippers” – What’s wrong with strippers? Also maybe I’m reading too much into this, but does the video seem to imply that strippers can’t be lesbians? Weird.

(1:05) When the participants start reacting to getting fucked with a stiletto heel – Yeah, okay, maybe you think that’s non normative and smacks of the male gaze. And maybe I personally am not into this. But some lesbians want to get fucked with objects. Haven’t you ever seen an object so pretty that you’ve been like, maybe I wanna stick that inside me? No? Well that’s okay, me neither really. But it’s super important to not yuck someone’s yum. Because when you yuck someone’s yum, that person feels shame. And there are enough people making our community feel shame about the sex we’re having. The valid part of this piece in the video, though, is when one of the participants brings up the fact that you don’t want to stick an object inside you that has been walking about town. This is true. Use a condom. 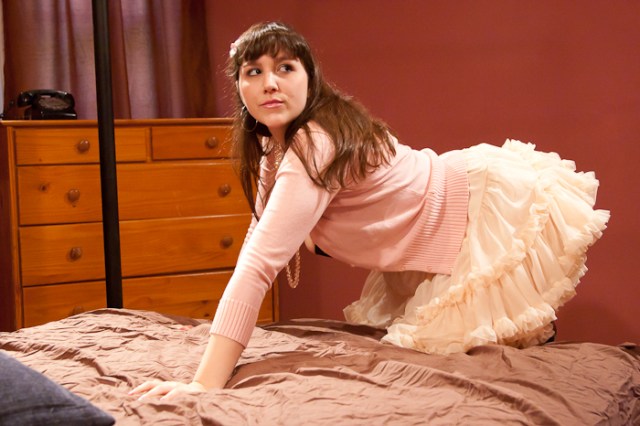 Even after all these things that I find hugely problematic, there are two things in the video that I find super valid to talk about.

Nails – In addition to inflicting possible pain on vaginas, long nails can do a number anuses and mouths, too. And not just for the reasons outlined in the video – that you have the pokey potential of tearing tissue. You can also have bacteria that hides up under nails, which can lead to some un-fun times. Basically, if they don’t allow the kinds of nails you’re rocking on the people that work in hospitals, you probably don’t want to stick them in your various orifices without some protection. That doesn’t mean you can’t have them. That means you should use gloves if you’ve got long nails. Here are some sexy black ones.

It makes me feel feelings.

I’d also like to point out that the representation in this video is thin and femme/feminine, also possibly entirely white. Now don’t get me wrong, not everything needs to be everything to everyone. I firmly believe that things are allowed to exist on the internet that don’t apply to me. But the claim has been made that these four people represent lesbians as a whole. I don’t think they do, and that’s putting it mildly.