When filling out my OKCupid profile, I wasn’t exactly sure what I was looking for. I knew that I was painfully shy about meeting strangers, and that I wanted to force myself to step outside my comfort zone a little bit. I chose “bisexual” as my sexual orientation because there were only three options, and that was the closest I could come to describing my personal preference. Although from time to time the pendulum swings one direction or another, I am generally open to meeting people of any gender, as long as they’re intelligent and respectful. I made sure to note as much in my profile.  To be perfectly clear, I don’t necessarily subscribe to the notion that gender is binary, nor have I found that the plethora of terms used to describe someone with my predilections — “bisexual,” “pansexual,” “gender-blind,” even the catch-all “queer” — ever really felt like words that fit me perfectly. Still, I was shy and single and in the market to go out for a series of awkward drinks with foxy strangers, so I clicked the box that made the most sense and moved on with my life.

As far as online dating sites, OKCupid is absolutely the most bi-friendly of the major leaguers in terms of how you’re allowed to define yourself. Most of the bigger sites disappointingly will only allow users to list themselves as seeking exclusively men or women, which can be inconvenient, insulting and annoying (Seriously JDate, my Jewish grandmother is VERY disappointed in you). Certainly, OKCupid’s users identify all over the map in terms of gender identity and sexual orientation, but it’s refreshing to have a recognizable space between gay and straight to even exist in. I can’t believe it’s taken this long for ONE site to offer this simple option.

this looks like not a big deal but it feels like SUCH a big deal you guys.

So what does it mean to list yourself as bisexual on OKCupid? Well, for starters you’re probably going to get a lot of messages from creepy dudes who think you’re some kind of novelty, and that messaging your craaaaazy, free-spirited self is the first step to writing their very own letter to Penthouse. As flattering as it is to be fetishized by random creepsters (read: not very), those messages are easy to weed out and ignore. Also, if this gets to be too much it’s totally possible to change your OKC settings so you can hide your profile from straight people.

According to this very strange article on OKTrends from 2010, although about 12% of women under 35 on OKCupid were listed as bisexual, a surprisingly small percentage of those women were actively messaging both men and women on the site. As it turns out, roughly 80% of surveyed users messaged either men or women exclusively. The slightly confusing graph below seems to suggest that younger bisexual-identifying women are more likely to approach both men and women, although this behaviour appears to decline with age. OKTrends theorized that this data seems to suggest that bisexuality is a farce — “that bisexuality is often either a hedge for gay people or a label adopted by straights to appear more sexually adventurous to their (straight) matches.”  This conclusion rests under the assumption that all people listed as bisexual on OKCupid are seeking partners based on an equal attraction to both men and women, which is certainly not accurate — this is why the Kinsey scale exists.  OKTrends’ logic seems problematic at best. Although the data presented is surprising, the very limiting vocabulary available to describe one’s sexual fluidity on OKCupid makes it difficult to gauge any sort of accuracy. 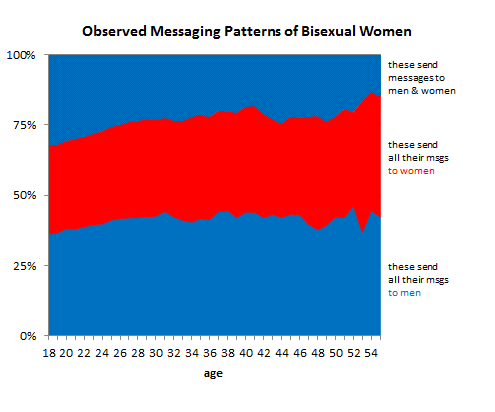 Personally, I was on the site because I’d found flipping through profiles far less daunting than meeting strangers at a bar. I know what my type is up to a certain point, but I’m absolutely terrible at approaching people in person (sober). I messaged with and even dated a couple of guys off the site, but had great difficulty finding someone with whom I felt a real connection (true story: I broke things off with a very sweet, well-read graphic designer because after a couple of weeks it was painfully obvious that the only thing we truly had in common was a mutual affection for The Muppets Take Manhattan). I can’t say I went in looking for one particular gender over another, but I did have a much easier time finding girls who seemed up my alley.

Over the years, I’ve maintained a love-hate relationship with my OKCupid profile, periodically abandoning it when I was in a monogamous relationship or felt overwhelmed by meeting strangers off the internet. Sometimes it can be difficult to gauge the chemistry you’ll have with another person just by reading a list of their favourite foods and movies. That said, I was met time and time again with messages from a specific set of people I knew for a fact I was not looking for: couples.

First of all, I’m 100% super OK with threesomes or even triad relationships — they can be fun. I’ve done both a couple of times and can honestly say that when they were good they were the most lovely, but when they were bad, were volatile and dangerous. While I applaud those who are able to make these kinds of arrangements work, I’ve decided after a LOT of crying/feelings/therapy that this is something I personally no longer wish to pursue. I said as much at the bottom of my profile — “For the last fucking time, my sexual orientation doesn’t mean I want to be your ‘third.'” This has not stopped countless variations on HotCoupleForU69 sending me messages about how such-and-such’s girlfriend thinks I’m cute and would I like to come over for a bottle of wine sometime? This weirds me out every time, especially because these people I am allegedly meant to be connecting with in one way or another have obviously NOT taken the time to read my profile to see what I am emphatically NOT comfortable with.  From what I’ve heard from friends, this is super-common for all women listed as bisexual across the board, which is a strange and sort of uncomfortable phenomenon.

There’s certainly a stigma surrounding bisexual and otherwise-inclined women within the lesbian community, though I can’t say that I’ve experienced it myself with regards to online dating.  Unfortunately, being an equal opportunity makeout artist comes with a lot of upsetting misconceptions – that we’re faking it for attention, that we’re really gay or straight and just haven’t chosen a side yet, that we’re slutty, that we’re incapable of monogamy, that we’ll inevitably leave our girlfriend for a boy or vice versa, that we are all insatiable, greedy, sex-crazed lunatics. As far as I can tell, the easiest way to disprove that notion is to… just not be that. And I mean, if you are one or all of those things, do your partner(s) a favor and be mega-up front about it.

The internet is full of weirdos, and currently when you list yourself as bisexual you’re essentially signing yourself up to meet twice as many of those weirdos. Although OKCupid’s system certainly isn’t perfect, it’s refreshing to see at least one dating site recognize that a grey area between straight and gay does exist — and that some of us are lookin’ for cute strangers.