As the holiday season looms over us like a dark cloud stuffed with turkey drumsticks, menorahs, candy canes and mistletoe, you might be starting to ask yourself all of those familial questions that only a queer would have to ponder: What if my cousin asks if I have a boyfriend yet? Do I bring my significant other to Thanksgiving dinner? Do I introduce her as [name] or do I introduce her as “my girlfriend, [name]”? How will I react when my aunt points out that my girlfriend and my grandpa are wearing the exact same Christmas sweater? 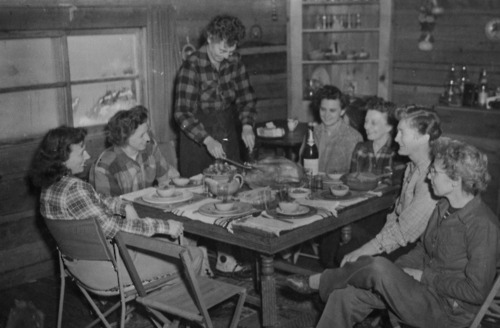 It’s likely that your parents are mulling over their own special set of holiday-related dilemmas.

In a pre-Thanksgiving edition of Steven Petrow’s Civil Behavior column in The New York Times, a fretting but accepting parent asks Petrow the question: It’s the holidays. People are always asking about my family. How do I tell all of the people in my life that my kid is gay?

He came out to us years ago, and we reacted supportively, but he hasn’t kept in touch with a lot of people in our rural town so he hasn’t come out to them himself. The thing is, we haven’t told our friends in town that he’s gay or that he’s coming here with Jacob (his new boyfriend); they’re just of a generation that still isn’t accepting, and we don’t want to ruin his reputation. So, what do we do about this situation and when? Do we have the right to tell our friends that our son is gay? Or should we just let it go and hope for the best?

This sort of parental “coming out” can come with baggage. When a mom tells a colleague that her child is gay, it isn’t the same as voicing her approval of Glee‘s “Express Yourself” cover over the water cooler, or reminding a coworker that Neil Patrick Harris isn’t into the ladies. It’s coming out as the parent of a gay kid; someone whose ties to a queer person run much deeper than entertainment value. With that sort of revelation comes assumptions of every stripe and variety. People might presume that she votes with her child’s best interests at heart, or that she’s trotting off to a PFLAG meeting that very night. Conversely, they might assume something incredibly inane and f*cked up: That she, somehow, was the cause of her child’s queerness. In disclosing that her child is LGBT, one winds up disclosing a lot about herself in the process.

Petrow gently slaps the curious parent on the wrist for caring about what others think:

Should we just let it go and hope for the best?

It sounds as if that’s what you’ve been doing, and you’ve discovered that it doesn’t work. I think what’s at the heart of this issue is hidden within your statement that you don’t want to “ruin his reputation.” Words like that suggest to me that you still have some work to do about acceptance. Don’t be embarrassed by that – families do have work to do when a loved one comes out. But don’t be embarrassed by your son, either.

Along with emphasizing the importance of not outing a child without their permission, Petrow discusses talking about the child’s relationship with the nonchalance of anyone who has straight kids:

Frankly, there’s no reason for a big announcement. You can easily work Chad’s personal life into your pre-holiday conversations. In response to, “What’s new with your son?” how about answering, “He’s started a new job this year and has a wonderful new boyfriend.” Or you can bring it up yourself in the context of how excited you are that he’ll be visiting soon – with Jacob. By treating it as matter-of-factly as any other news in his life you’ll be signaling to others that you accept him completely.

Although I was joking about the alternatives I posed above (i.e., Facebooking or tweeting it), I wasn’t when it came to making a toast. How about raising your glass as you sit down for your Thanksgiving meal with some words like these, “We’re thankful for many things this year — and we’re especially glad to welcome Jacob and Chad to our home!”

Now that’s a heart-warming holiday toast in which this Grinch would happily partake.