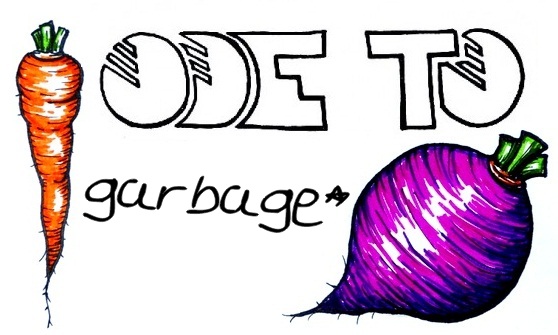 I can’t throw out veggies. Maybe it’s my pseudo hippie dippie roots, my abode’s lack of compost-ability, my limited grocery budget or my somewhat unnatural love of fiber, but I just can’t do it. I assume many people share a similar outlook when it comes to discarding whole vegetables, but do they pause before discarding the scraps? Judging by the number of raised eyebrows I get when I object to friends clearing my cutting board into the trash, I will assume no. Not gonna lie, I was a bit saner (and more tolerable) before I spent an unemployed winter in an apartment without a city-run composting program. I emerged from the defrost somewhat deranged with produce prices on the brain. I could use them to shine my shoes or darken my grey hair! Or I could just eat them instead.

When it comes to eating garbage, you just need to look at your fridge objectively and reanalyze your kitchen habits. There are a lot of old wives’ tales for cooking, but how many of them ring true for you? Instead of relying on them, look to the three Rs instead.

There are a lot of steps that cooks employ out of habit as opposed to necessity. Does this actually make your meal taste better or are you just accustomed to doing it? Given the opportunity, go for the lazy option before you go for the garbage bin. Trust me, sloth has its perks. 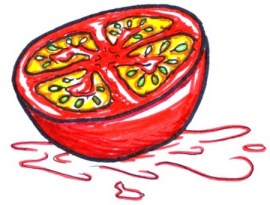 Why would you throw out tasty?

Savor your seeds. Countless recipes for tomato soups and sauces tell you to deskin and deseed them for a smoother puree. Ignore their instructions and embrace the slightly grittier sauce. Tomato seeds contain three times as much glutamate as the actual flesh, the amino acid responsible for tomato’s umami aka savoriness. Why would you want to toss that out? You wouldn’t! Keep the seeds, save some time, win all the flavour points!

Stop. Step away from the peeler! Before you strip your veggies naked, figure out if they actually need to be peeled. If they aren’t grown in a pesticide and herbicide heavy environment, you might as well take the lazy way out. There’s still debate about how many nutrients are actually hidden in vegetable skin, but there’s nothing wrong with adding another dose of dietary fiber to your meal. In the case of carrots, beets and other root vegetables, that fiber hardly changes the texture of the finished product. Just keep everything clean by thoroughly washing your produce with warm water and a scrubby pad or brush. Or if you’re still a bit skeezed out, make an apple cider vinegar bath. 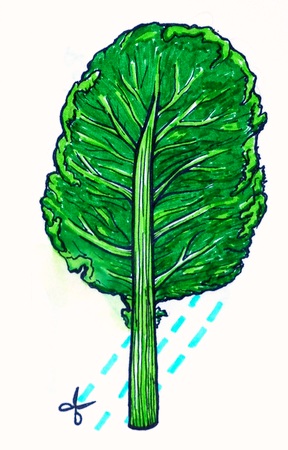 Fiber isn’t scary if you attack it first!

Lots of plant parts are wasted after they’re gnawed once and deemed too tough. Instead of writing stalks off for being fibrous, embrace the stringiness! Learn to work around this potential problem by reaching for your knife instead of the garbage pail.

Learn to cut. Start by looking at the stem and tracing the direction of its fibers. If you leave them long they’ll get stuck in your teeth and your guests will complain (once they manage to stop chewing). Shorten them up to make them manageable, and possibly even delicious! This doesn’t mean you have to pulverize your plants into submission. For broader leaves like leek greens, chop them into 1/2 cm strips before sauteeing them with balsamic and mustard. For fibrous stems (where you don’t want tiny rounds), cut them on the bias instead. All of a sudden a pile of kale stems becomes a stand in for broccolini.

Take a cue from meat when you turn on the heat. Whenever you’re perplexed by a particularly fibrous vegetable, think WWMBD (What Would My Butcher Do). Tough cuts of meat are also plagued by long fibers, but chefs have been dealing with them for years without mushing their meat. Roast ’em or braise ’em low and slow to give your tough veggies enough time to soften and tenderize. Even if you are vegetarian, the steps to Boston Butt tenderness can still make your meal great. 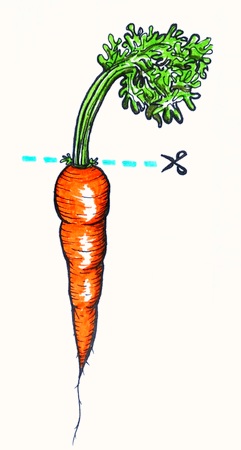 Two veggies for the price of one!

Any object worth acquiring should have eight other uses and the same principle applies to the contents of your crisper drawer. Even though you might like a carrot for its root or cauliflower for its florets, that doesn’t mean it’s the plant’s best part. Keep an open mind to other dinnertime possibilities. Whenever my girlfriend’s roomie tosses out a broccoli stem, I secretly die inside. Please don’t make me die inside.

Don’t throw out the wrapping paper. Plant leaves are just as edible* and flavourful as the vegetable they come with, so make sure to have a taste before you bin them. Broccoli, cauliflower and other cruciferous vegetables’ outer leaves are a bit fibrous, but they’re also free. You might have to cut them into smaller segments or cook them a bit longer, but you’ll be rewarded with a slaw or stirfry with a similar flavour profile.

Hold onto your greens. The same green-gobbling principle goes for root vegetables as well. Embrace the produce potential when you’re lucky enough to bring home taproots towing healthy greens. Treat your beet greens like collard greens. Add radish leaves’ peppery bite to your next salad. Or update an old recipe by substituting young carrot greens for its herb cousins parsley, dill and cilantro. Just make sure to store the greens and the roots separately so both parts don’t deterioriate.

When in doubt, throw them into the freezer. Make it into stock. Enough said.

*Sometimes they really aren’t edible. Confirm that your plant part is palatable.