My favorite games are almost always epic RPGs where I can spend an entire hour making sure my character is as sexy as possible in exactly the way I want them to be and I can spend entire months exploring and clearing every dungeon and collecting every special weapon and becoming the God of All Places, People, and Things. And then, once I have saved or destroyed the world, I can start all over and do it again EVEN BETTER THIS TIME. Dragon Age. Skyrim. Fallout. Dragon’s Dogma. Mass Effect (although I actually never replayed Mass Effect because there’s something sacred about your first Femshep and it just never felt right to me to redo her. MY Shepard was about 40 years old and blonde and surly and a total renegade. Like basically imagine if Starbuck had had a chance to grow up but try not to get too sad about it.)

I can’t really guess how many hours I have spent in each of those games, because I mostly played them on Ps3 and that console is all dusty in a closet somewhere nowadays, I think. It’s a lot though. I promise you. Like, I played Dragon Age Inquisition four times for reasons not entirely unrelated to romance. (Sera, Josephine, Cassandra, and Dorian, if you must know.)

But here is a secret, from me to you: The game I have played the most is no sprawling epic that takes 100 hours to beat.

It’s a roguelike, or roguelite. This genre encompasses a lot of different things, and of course a few very loud people have very strong opinions about what actually counts as a roguelike and what is not serious enough to bear that sacred mantle, but games in these genres seem to have a few agreed-upon things in common.

The first is permadeath. If you die, your game is over. This is something I think a lot of people find stressful but for me it’s really freeing? If I screw up I can just start again and hope for better luck instead of having to replay the same tough fight over and over and over again until I don’t actually enjoy the game anymore.

Second: some amount of randomization/procedural generation. These games are meant to be replayed. So every new game will have a different set of circumstances. You might fight different enemies, or have a different map, or have different weapons available to you. Basically you never know exactly what a given run of the game will throw at you.

Third: a steep learning curve. There’s not usually a lot of handholding in these games. You learn by dying, mostly. Wikis and subreddits and Let’s Plays become your best friends. (If you think I have played an excessive amount of Binding of Isaac you would not want to know how many hours I have spent watching in on YouTube.) My suggestion is, play until you die a couple times, then go looking for answers to specific questions once you at least kind of know what questions to ask.

Anyway, starting with my obvious favorite, here are some roguelike/roguelite games I like a lot. BONUS: all of these games run easily on my not-fancy-at-all laptop.

The Binding of Isaac Rebirth/Afterbirth 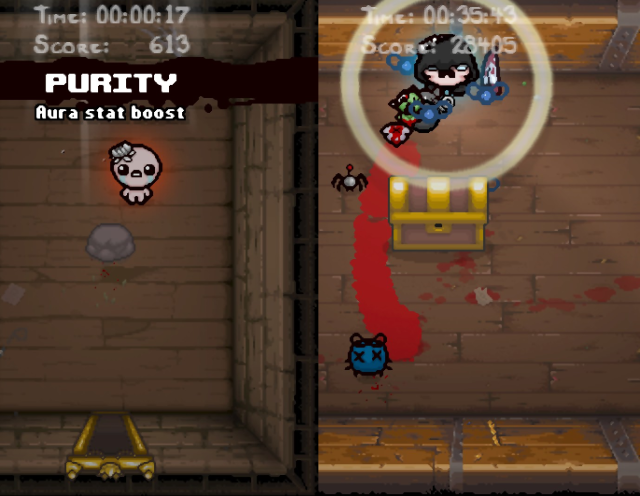 I play this basically every single day. It’s my comfy place. If things are going especially well I can beat it in around 30 minutes. It fits perfectly into my schedule on the approximately seven days a week when I don’t have a whole chunk of time to play a big huge beautiful RPG adventure. It’s fast and little and adorable and also troubling and gross.

The game itself doesn’t really have a narrative, but they give you backstory during the opening credits in the form of a 2 minute long stick figure movie, which is a very upsetting modern retelling of the Abraham/Isaac story from the Bible that you should skip if you are triggered by depictions of child abuse (it’s a cartoon, but it is legit dark). The important thing to know is that instead of waiting around for God to spare him, Isaac escapes into the basement. And that’s where the game starts.

I would describe the art style as, I guess, cute body-horror? The overall design owes a lot to SNES-era Legend of Zelda, except with way different content. Like, Isaac himself is a cute little boy with giant cute eyes. But he uses those giant cute eyes to slay enemies by shooting them with his tears. And the enemies are poops and worms and spiders and flies and things that are probably body parts, and also his mother and Satan and Isaac’s very own self. You go deeper and deeper into the dungeon, fighting all the things you are afraid or ashamed of, and picking up power-up items that are often as grotesque as the monsters you’re fighting. (And every item you pick up alters your appearance so by the end you are probably somewhat less cute from carrying around all of your horrors. Just like real life!) But, still, it’s cute.

The dungeon progresses in a set order of floors, but each floor is itself procedurally generated and will have different items (there are hundreds of items in this game, so the difference between runs is hugely variable). It’s pretty punishing at first, but the more you play, the more you know. And you continually unlock items as you complete objectives, so it actually tends to get easier as you gain access to more powerful weapons.

There is one final DLC coming out hopefully by the end of the year that will add even more content, which I am pretty pumped about. Even I might start to get bored around the 800-hour mark, you know? 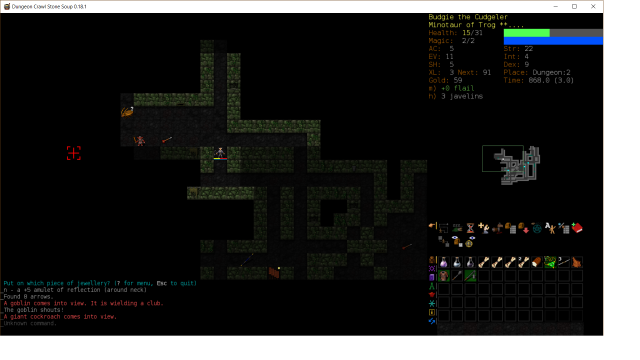 This is a very traditional old school roguelike. Old school to the point where there is no sound and you can play it in ASCII if you want, but thankfully it is also available in Tiles, which are tiny little pictures that don’t move but at least they look like actual things I can understand.

There is no story. You start at the top of a dungeon and have to work your way down to the bottom to retrieve the fabled Orb of Zot, and then you have to bring it all the way back up and run out the front door with it. This game is SUPER hard. There is a tutorial, but I never used it so I don’t know how helpful it is. I still have never beat it in probably 1000 attempts (maybe because I skipped the tutorial? Guess we’ll never know). I came so ridiculously close one time last year, but I panicked and ruined everything (WITH THE EXIT IN SIGHT WHY DIDN’T I JUST USE THE WAND OF DIGGING I’D BEEN CARRYING FOR THE ENTIRE GAME???) But anyway I was so upset with myself that I didn’t really play again until pretty recently, but now I’m back in the saddle and I’m remembering how much I love it.

There is a lot to learn in this game, and looking things up as you go is essential to success. It’s all the dice-rolly parts of D&D without the fun role play stuff, but there’s no Player’s Handbook. So within the game, you want to examine every enemy until you know what they are capable of. Outside of the game, I find the subreddit to be very helpful and I keep it open whenever I get to the tough late-game. The most important thing, I think, is knowing what order to do things in, because the game won’t tell you, and you will die if you go to the wrong place too early.

The coolest thing about DCSS is that it’s totally free, and it’s being constantly improved and rebalanced by the developers (with clear and descriptive patch notes, even!). You can play a current build online, but I usually download the most recent stable build and play offline because that version has some mouse capability and I don’t need to see my thousands of deaths on a public scoreboard.

Winning this game, I IMAGINE, takes at least a couple hours. It’s turn-based though so you can play at your own pace. I love it so much. It is so cruel. I’m gonna win it some day, I really am. 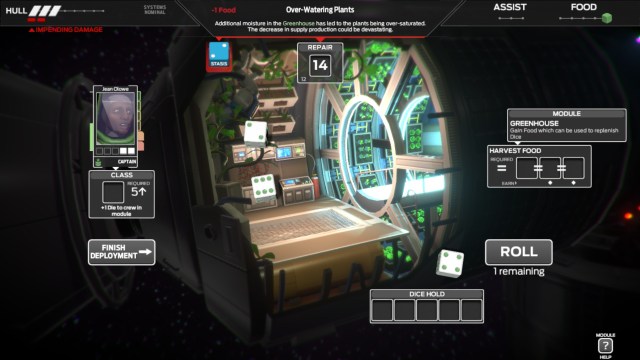 This only fits loosely, I guess, but I like it. It’s life or death Yahtzee in space and when your crew members die you eat their corpses for sustenance?

This game isn’t hard, really, it’s just heavily dependent on RNG and sometimes it can be frustratingly unwinnable even if you do everything right.

I shouldn’t like it as much as I do. Maybe I just miss Yahtzee. 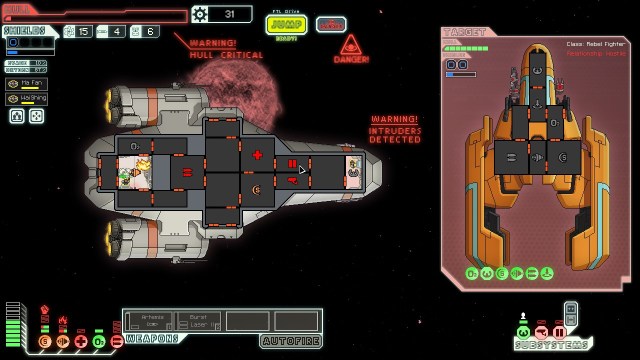 Here’s a good space one! Admittedly, there’s not nearly enough Yahtzee in this particular space, but this game is well balanced and tough and kind of charming.

FTL is relatively easy to pick up and play, it’s pretty intuitive. I haven’t beaten it but that’s because I always panic when I get to the final stage. But that’s a me problem; I have faith you’ll do better.

In FTL you are a ship trying to outrun the advancing rebel fleet to deliver some important intelligence or something, I think. You hop from star to star and improve your ship and recruit crew members and fight bandits and answer distress calls that 99% of the time are traps, and the art and music are nice and the combat is very satisfying. I mean sometimes mantis people warp onto your ship and murder your crew, and sometimes everything catches on fire, and sometimes this all happens at once, but not every time.

I opened this game last night for the first time in a while just meaning to grab a screenshot and wound up playing for a couple hours. It’s just really really fun. Maybe I’ll make it my mission to finally beat it this weekend.

There are tons more games like these; my Steam library is overflowing with them, but these ones are my go-tos for killing time until the pizza arrives or putting off replying to a text message. Any titles I missed that you think I should try? And what are your de-stressing games for when you don’t quite have the time to build an entire house and recruit street urchins to be your children in Skyrim?