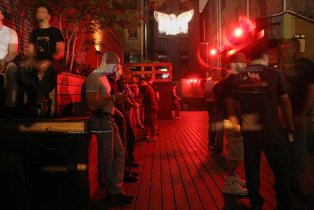 A same-sex marriage bill passed the state senate in New York Friday night and everyone everywhere with a heart in their body said they could hear it sing.

It wasn’t all glitter and trombones, however. On 28th street and 11th avenue in Manhattan, gay patrons of leather bar, The Eagle, were treated to a trip into the past only minutes after Cuomo signed the same-sex marriage bill into law when an unannounced inspection, allegedly planned weeks in advance, broke the jubilant mood with police officers and flashlights in everyone’s faces.

Police officials told the press that the inspection was part of a routine operation carried out at “a couple thousand clubs” every year in every precinct except Central Park by MARCH, a “multiagency response to community hot spots.” “Community hot spots” are defined as “subjects of chronic complaints from community members that are mostly reported through the city’s 311 and 911 communications systems over concerns like excessive noise or fighting.”

According to patrons, about 100 people were in the bar when representatives from the NYPD, the State Liquor Authority and three other city agencies arrived.

Chief Police Department spokesman Paul J. Browne, in addition to disputing many patrons’ versions of events, has pointed out that, lacking a “crystal ball,” they were unable to predict the ruling in Albany would coincide with the inspection.

But still! IT’S GAY PRIDE WEEKEND FOR CHRISSAKE! The owner of the bar, Robert Berk, recognizes the police were “just doing their job” but would’ve liked them to maybe do their job during the day, or a different week, and described the police as “aggressive, but nice.”

Berk said the inspection lasted two hours, the police say it took 45 minutes. Patrons say they were told to empty their pockets and had lights flashed in their faces, which Browne also denies. Browne goes on to say that “the notion that anyone was searched or the lights were turned off is utter fabrication.”

“I am going to ask the police commissioner to conduct a formal investigation concerning the circumstances around this raid… [while it was] true that there are these multiagency inspections, I think this one was ill-conceived and ill-timed given the circumstances surrounding the marriage equality celebration, on Pride week.”

Six violations were issued regarding issues like “unlicensed security” (from the NYPD) “unnecessary noise” (from the Department of Environmental Protection), “no public assembly permit” (from the Buildings Department) and, from the liquor authority, two for “extension of premise” and “failure to conform to application.”

“I find interesting the timing. I would just like to know from the police: `Why did they do that?’ To me, it is a blatant sign of intimidation and harassment, I mean, 42 years after the Stonewall riots and we still have to live in fear of the police disturbing our quiet enjoyment of life? I just don’t understand. We are very peaceful.”

“In typical New York City Police Department fashion, the N.Y.P.D. demonstrated its disrespect for the gay community by raiding the Eagle mere moments after the passage of most important piece of gay rights legislation in history.”

The Eagle NYC is one of several Eagle bars around the country. In 209, police raided The Eagle Bar in Atlanta, where patrons reported they were “systematically searched, had their cell phones confiscated, and insulted by homophobic police officers.” There were huge protests and the resulting lawsuit over plaintiffs being “unlawfully searched and detained” succeeded and the city had to pay $1,025,000 in damages.

It seems unfathomable that a group of city agency officials — especially those in charge of regulating bars and clubs — would be unaware of Gay Pride Week. Would they “inspect” a sports bar on Superbowl Sunday? Not one person in any of these agencies at any point between when the inspection was planned thought, “Hey, maybe another time?”

With victories like Friday night’s coming so rarely and taking so many years to accomplish, it’s nothing short of tragic that for at least 100 gay revelers on Friday night, progress seemed a bit further out of reach, if only symbolically.