This one time Gabby, Ali and Vanessa all went to The Lesbian Love Octagon, playing at the Kraine Theatre at 85 East 4th Street in New York City. This show is a camp-tacular celebration of dyke drama and its running just in time for Pride month. After we saw the show, we all got together at a bar and, over Red Stripe, hashed out some of the finer points on our feelings.

Lesbian Love Octagon is set in the 90’s on the Lower East Side of New York City, where we follow Sue, a soft-butch-esque leading lady who just lost her girlfriend to her ex, on her musical adventure to find herself post-break-up. The cast of characters is a series of Sue’s ex-girlfriends and ex-girlfriends’ girlfriends to create the Love Octagon, a structure any close-knit community is used to having. Darla leaves Sue for Jerry, Sue’s ex (a trans* man whose plot line wasn’t offensive, omg so exciting!). Chris, Wendy, Jess, Anya and Scout set about putting her back together.

First and foremost, we LOVED the camp aspect of this piece. It was fucking Camp with a Capital C. Sometimes within the queer community, we take things very seriously. This took the crazy dyke stereotypes we try to avoid (or not) and embraced them. With songs like “Ordinary Day at the Wimmin’s Bookstore,” which paints a cartoon picture of basically Bluestockings and has a refrain about a vegan soy chai latte, and “Dyke Drama and Tofu Scramble,” which is all about love drama at brunch… well, we’ve been there, is what we’re saying. We’ve been there and we want to laugh about it. This show lets us, nay, invites us to laugh about those moments where we look at our lives and just scream “Shit, that’s gay! That is rainbows coming out my ears gay,” at ourselves. It prompted Gabby to say, “But for a minute its like when you see your own ass in the mirror, its kind of like (dramatic intake of breath) ‘that’s totally my ass.’ You know what I mean?” It was fun to laugh at the ridiculous stuff, even the semi-dumb stuff, that happens in our community sometimes. Also during the Act I finale “Vibration Salvation,” they sing the names of sex toys to the audience in fully-belted power chords. This was a thing I didn’t know I was missing from my life until it happened. Seriously, kudos on the humor. 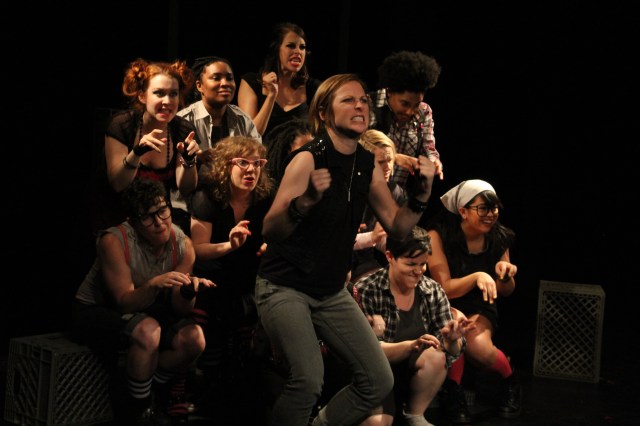 Kelly Lockwood Larson as Scout and much of the Cast, photo by KL Thomas

We were overwhelmed by the crazy-talented cast – every single person could sing and act like whoa. And what’s more, there was an immense amount of diversity – racial diversity, body diversity, gender presentation diversity – and no one was tokenized. All the cast members were a huge part of the action the entire time, and all of them were complete characters. And you guys. They. Can. Sing. They can wail. They can fucking perform. And while we loved every single performer we had the pleasure of seeing on stage, Gabby and I did have one very favorite – Ti Grieco, who plays Jess, is freaking phenomenal:

Gabby: One of my favorite books as a teenager that kind of helped me figure out that something was different about me was called Flaming Iguanas by Erika Lopez. It’s this badass tale of this Latina chick thats just, “Fuck everybody” and gets on a Harley and travels across the United States, right? So, my image of that character has always stayed in my chest. And then that actor on stage with, like, the shaved head and the mohawk?

Ali: She was my favorite.

Over beer, we had this interesting conversation about casting in New York. This cast is not small. This is a large, diverse cast with a ton of talent. And looking out over these amazing performers, we realized a thing. If any New York performance claims they don’t have a diverse cast because they can’t find diverse performers, or they can’t find a representative actor or performer that acts, sings and dances to the nines, then they are lying. It is just not a viable excuse. They just need to turn to the casting director of this show and ask where they found all these lovely humans. 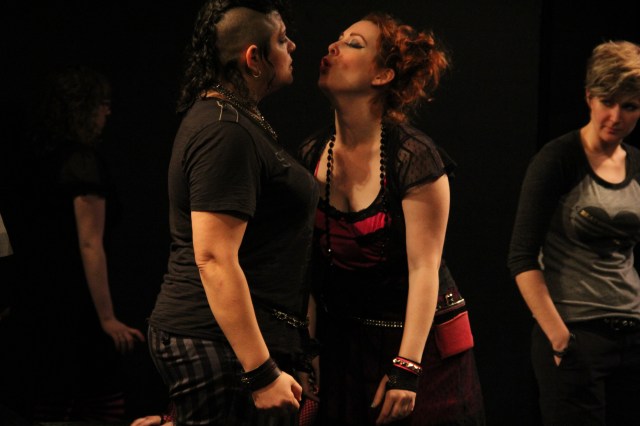 Ti Grieco as Jess and Linday Naas as Wendy, photo by KL Thomas

We were nervous about the trans* storyline here because this show was written in the 90’s when a larger contingent of artists had not yet been educated on how to portray a trans * character fairly. Turns out, we didn’t have to be worried. Jerry was one of our favorite characters – again, not tokenized and well-rounded (far more well-rounded than the lead; we’ll get to that in a moment). Vanessa did some research to put our mind at ease and it turns out they actually changed a bit of that storyline and went into the production educated.

The night we were there, the production supported Trans Women Belong Here with a raffle… of a Hitachi magic wand.

Now don’t get us wrong, it wasn’t all sunshine, kittens and Ani. We had some serious issues with the show as well.

We wish we could tell you a little bit more about the main character, Sue. But we can’t tell you much, because the writer really did a “Bella” with Sue. Sue was like this blank slate that you could project onto. Vanessa disagrees with this statement, because she at no point felt like she could put herself in Sue’s shoes, but we’re pretty sure that this was on purpose. Gabby and I think Sue was supposed to be the Everydyke. And for the same reason neither one of us will read Twilight, we didn’t care for the fact that Sue was on a quest to find the depths of her own personality… and never found it.

Vanessa: Sue is so cute, you guys

Ali: But Sue is also not a character.

Gabby: We’re going to talk about that.

Ali: Sue is a black hole of things you project onto.

Gabby: Yes! Did we have that thought at the same time?

Gabby: I was like, “this is why Twilight works,” because the main character is a fucking blank slate with no interests that anyone can project themselves on to. She’s Twilight, she’s Kristen Stewart. 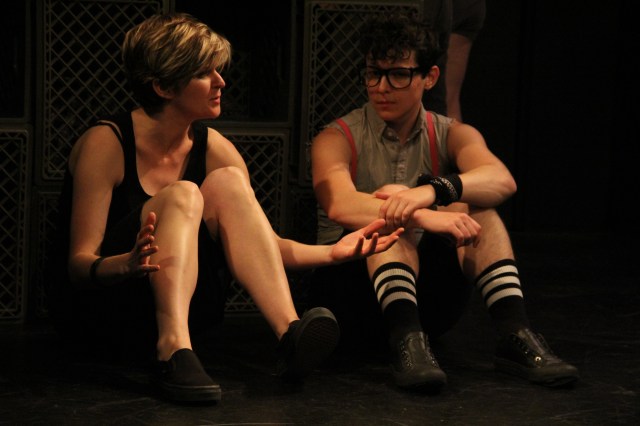 Oh Lord, we just want to warn you about the song “Building a Butch,” which supposes that butches get that way becomes femmes mold them into it. It is straight up not okay:

Gabby: I want to talk about the song. The butch and the femme song.

Vanessa: Oh how it was kind of –

Vanessa: But the thing is someone has said to me “build a butch” before and it sounded really familiar.

Gabby: It’s kind of like the good thing about this song – it brings out some uncomfortable things. Because I want to be like, “No, nobody built me. No, nobody built me,” but if I think about when I felt more comfortable shopping, its been with, like, a wing-femme. But also, like, the song and dance routine, where they imitated traditional Indian dance?

Vanessa: That was strange.

Gabby: That was weird.

Vanessa: That was not okay.

Ali: I literally watched it like this (covers eyes with hands).

Gabby: I felt like I was watching one of those old 1950’s movies where, like, Clint Eastwood is playing an Asian guy, you know what I mean? Like, what the fuck? It was just a low point in a really overall, like, fun sort of thing.

Basically, our verdict on this song was, you can keep the Build a Butch parts, we guess, but lord lesbian Jesus almighty, please change the dance routine. Our big round sad eyes just screamed “NO WHY CULTURAL APPROPRIATION WHY” during the entire number and we stopped paying attention for a little while.

As writers who develop characters and stories, we had massive issues with the ending/finale song, which (spoiler alert) sees most of these people coupled up without any real growth that came from their own inner being. If this is supposed to be a critique on the often co-dependent nature of lesbian relationships within a predominantly lesbian community, it didn’t land and it wasn’t funny. We would have rather the art mirrored our own lives; we wanted the characters we had come to love to actually change from how immature and messed up they were in the beginning to something a little less immature and messed up when we leave them. Vanessa made the point that she thinks it was just to make a U-Haul joke about lesbians committing and moving in too quickly, which they could have made at several other points during the show. All of us agree that only one couple on that stage actually belonged together at the end – if you’ve seen it, let us know who you think that couple is. The writing didn’t earn the other couples, there wasn’t enough substance behind them to be believable relationships, wethinks:

Gabby: I’m a hopeless romantic. You know what I mean? I don’t necessarily daydream about my wedding, but I do daydream about being in love with someone–

Vanessa: – with your person –

Gabby: Forever. Finding my person, you know? Forever, in whatever capacity that is. Like deep down inside I really think that if I do ever marry somebody then I am going to make that commitment. That’s, like, very sacred, and very special and there is a place for that. And I felt a little cheated that like the second somebody turned around in that song and said “I love you” and they didn’t even know her they were like, “Now I get to take all these romantic things and do them with you.” Someone should fucking earn that, you know?

Vanessa: I kind of feel like she constructed the idea of the octagon and then was like, “how can I fill out the octagon” instead of making real relationships.

Overall, though, issues included, would we recommend you go see this show?

Vanessa: Can we just say that overall if someone asks me if they should go see this, I would say yes.

Gabby: Everyone should go see it.

Ali: I would send my straight friends there.

Gabby: It’s very lesbian though, I felt that. I felt there were pockets of openness for modern day queer identity, but it was very, like, lesbian.

Basically if you want some Good Gay 90’s Fun, put on your plaid, berks and ripped fishnets of the unfashionable lesbian utopia of yore and head on down to the Kraine Theatre. The show is playing until June 29th. You can grab your tickets here!

sign up for our newsletter
Related:90s nostalgiaeventmusicalstheater reviewyou should go