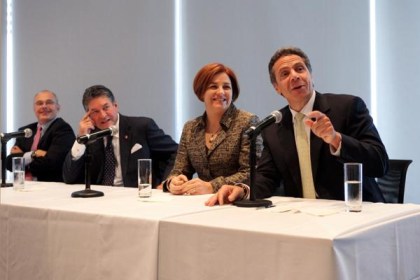 photo by SARA KRULWICH for The New York Times

Following New York’s Marriage Equality victory this past July, there’s been a lot of excitement and reflection. On October 18th, The New York Times took up this topic in a panel discussion about the road leading up to the legalization of same-sex marriage. I was there, and I took sporadic, auto-corrected notes on my iPad which I will now attempt to interpret and share with you.

The Place: Conference room at the New York Times building. Filled with gays in suits, lesbians in boots, journalists and political players.

The Food: They had these delicious warm chocolate chip cookies! Totally unexpected but greatly appreciated.

Panelists: Governor Andrew Cuomo (Hilarious and charismatic), Christine Quinn (Well-Spoken Speaker of the NYC Council, power lesbian), James Alesi (lovable Republican State Senator — one of the four senators to change their vote to allow for the passage of the law, a risky career move for a Republican but also one he proudly called “the best vote he ever cast.”) and Bruce Gyory (professor, political consultant and statsitcs guy)

The Details: Governor Cuomo began the discussion by congratulating The Times on their impactful and comprehensive coverage of the issue. He pointed out that although he’s generally been very critical of The Times in the past, he also speaks frequently on the basic importance of journalism and keeping people educated on the issues. When asked how the tide shifted leading up to the law’s passing, he answered that it was “the people” who brought about the shift in the Senate. “Move the people, move the politicians.”

Christine Quinn is a lesbian and therefore holds the most personal position when it came to the bill. Quinn said she grew up never expecting gay marriage to become legal. While championing the bill, Quinn recalls speaking to senate members about her own personal experience of wanting to be married — she and her partner both lost their mothers and have aging fathers who they want to attend their wedding. She spoke to “on-the-fence” politicians about the idea of having to wait to obtain rights to which all citizens should be entitled.

She attributes much of the success of the campaign for marriage equality with the involvement of the business community and hopes to help other localities replicate what they did in New York. For Quinn, the main issues currently on the forefront of the New York GLBT agenda are gender identity discrimination, bullying and hate crimes.

Alesi’s first time voting against same-sex marriage was a very hard thing for him to do. Some say his dramatic answer proves that he was conflicted about his decision.

Alesi joked that maybe he could get a SAG membership and then followed up by admitting to the audience that he’d always known voting against marriage equality was wrong, but he’d always been a part of the political game, too, which prevented him from seeing clearly. After he voted no in 2009, he promised himself never to vote no again. Since Alesi’s “yes” vote was crucial in passing marriage equality, he’s lost a lot of support from the Republicans. NOM has even put up billboards shouting, “James Alesi, You’re Next” implying his career in the New York Senate is doomed.

But for Alesi, doing what was right was worth the risk. In that video above he says that although he lost a lot of political allies and friends, he gained a lot of new friends, too. Alesi is Catholic and says that although personally he doesn’t support abortion, he’s always been pro-choice because abortion is a “civil right, not a religious issue.” He feels marriage is also a legal issue and should be treated as such. Religious, but far from narrow-minded, the Senator belongs to Spiritus Christi Church which was excommunicated for ordaining a female priest.

Gyory, a professor and pollster, spoke about the dramatic rise in acceptance of gay marriage around the country.  He also touched on the fact that money for effective advertisements has helped the shift in thought, specifically for white Catholic women in the suburbs.

All in All: A successful event!