This is a recap of episode 312 of Orange Is the New Black, a Lifetime movie based on the novel Dolly Dingle, Lesbian Landlady.

After eleven hundred years, Daya is finally having her baby! She’s in labor and it’s excruciating and she doesn’t even have any Tylenol. Everyone’s crowding around giving her advice about breathe like this and squat like that and moan such and such way and eat this can of pineapple. That last one comes from Aleida and so Daya does not accept. In fact, she tells her to skedaddle because she kind of hates her because Aleida kind of tried to sell her baby for commissary gift cards. 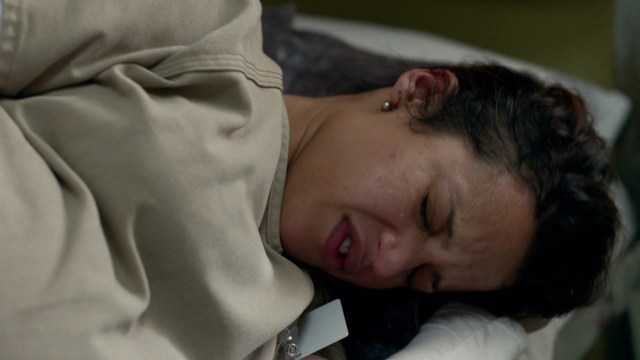 I just feel really sick and like super betrayed. 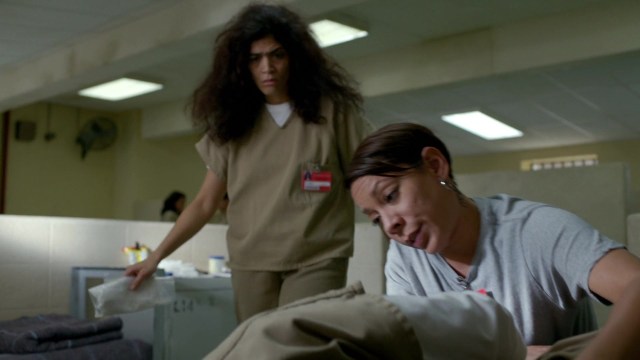 I told you not to get invested in another Ryan Murphy show.

Aleida Flashback! Tiny Daya is playing with a used condom in the backyard, a thing she just found lying around, while Aleida tells her friend there’s a free summer camp for low income families upstate and she wants to send Daya to it. Her friend thinks it’s the worst idea she’s ever heard of because she’s not into accepting charity and she’s also not into Daya’s cultural influences and heritage being whitewashed away (which is a super valid concern; I worked at a camp just like this when I was in high school and college, and that’s exactly how it goes). The condom-as-balloon thing really seals the deal, though, for Aleida.

Back in Litchfield, Red’s farm to table diner is so popular that she’s had to instate a lottery for tickets to attend. The line is basically wrapped around the entire building. Piper and Stella are not queued up because they’re busing sewing panties and talking about how Alex dumped Piper and Piper can’t believe it. Alex dumped her. Alex dumped her. “A sophisticated, powerful criminal mastermind like you?” is a thing Stella says with a straight face. She invites Piper to movie night but Piper says she needs some time to really dig into her emotions and process what happened and take responsibility for her contribution to the demise of her relationship.

LOK JK, like every Slytherin masquerading as a Hufflepuff, she just wants to mope around in public and feel like everything is everyone else’s fault and use other people’s sympathy to amass power. Textbook. 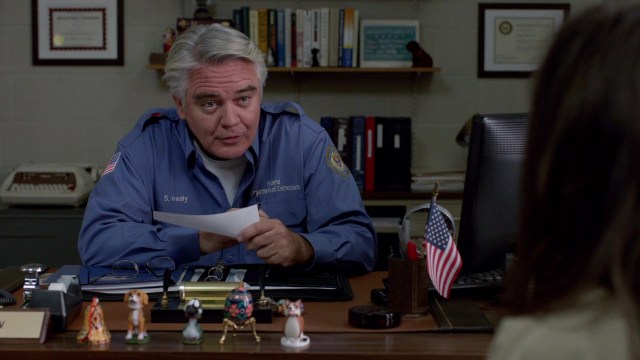 Anyway, that’s what men’s rights are about. Now here’s a thing I wrote about reverse racism. 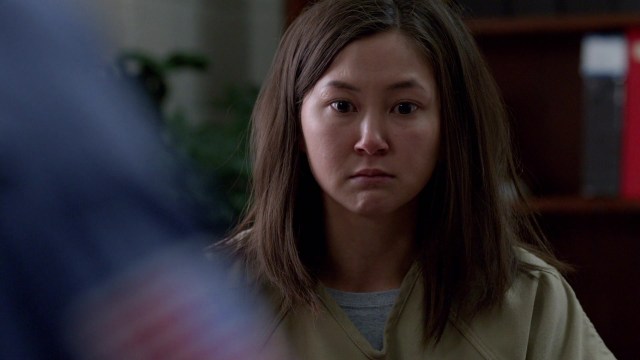 Will you punch me in the face instead?

Soso’s depression is at its max now that Berdie is gone and she’s back to dealing with Healy. He wants her to take anti-depressants and she figures she’s got nothing else to lose, so why not? Only when she hits up the new MCC doctor, he leaves her alone with a couple hundred thousand pills and she stuffs them all into her pockets, directly.

Pennsatucky and Big Boo are sorting out what to do with Coates. It’s not enough to get Pennsatucky away from him, Boo wants her to get revenge on him. In fact, she wants to rape him right back. Pennsatucky isn’t really feeling Boo’s plan but she also know she’s never going to get a single drop of justice from the system, so if she wants some, she’s going to have to take it. Big Boo’s been saving dog tranquilizers or something from the pet therapy program in season two, so her plan is to stuff Coates full of them and then stick a broom in his ass. Pennsatucky reluctantly agrees. 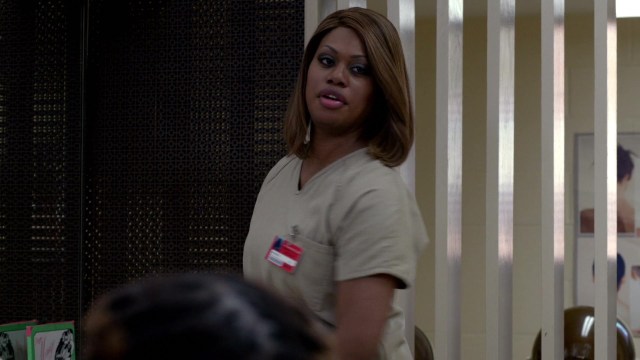 Make it quick. I have a magazine cover shoot in 20 minutes and a press day for the movie I did with Lily Motherfucking Tomlin.

Sophia is in her salon, minding her own damn business like she always does, when a handful of prisoners waltz in to harass her with the most disgusting, transphobic bullshit. It’s so upsetting. It’s one of the most upsetting things I have ever seen on TV. I watched this episode at the time of the summer when it seemed like one trans woman was being murdered every week. Laverne Cox is one of the very few high profile black trans women we see regularly treated with respect and given a voice on television — along with Janet Mock and now Chandi Moore because of I Am Cait — so watching her get brutalized and abused like this is important because this is real life for so many trans women, especially black trans women, and we need to bear witness to this horrific, inexcusable, perpetual violence so we will accept that it’s happening and stand with our trans sisters to MAKE IT STOP. But goddamn it is hard to watch. I had to pause it like seven times to even get through it. She fights back and it only makes it worse. She fights back and one of the new stupid guards sees her and runs for a supervisor. They really almost kill her.

She finally ends up in Caputo’s office and because she knows her rights and she knows her shit, and she tells him like it is: All these guards need training, half of them need to be fired, the women who jumped her need to go to SHU and if he doesn’t figure out how to make that happen, she’s going to get a lawyer and deal with him with a lawsuit in court. He shrugs his trademark impotent shrug. 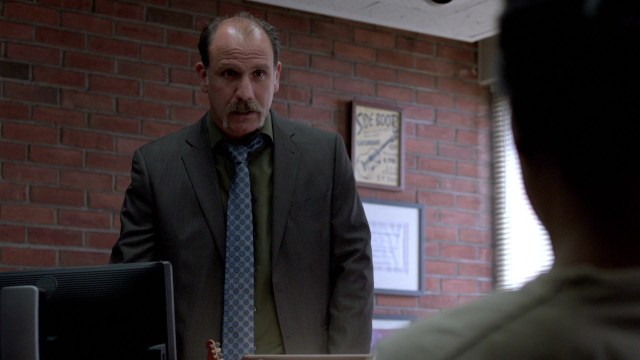 I got Vincent Crabbe on BuzzFeed’s Which Harry Potter Character Are You test. Who’d you get? 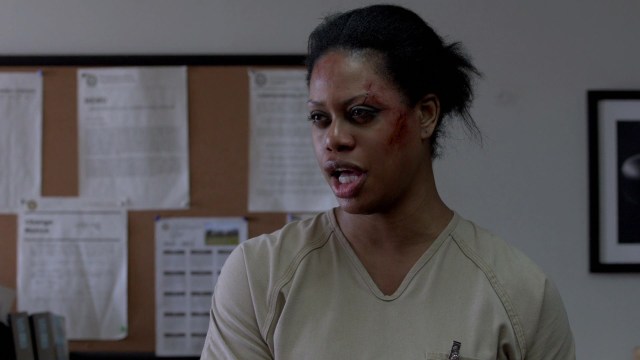 I don’t need a BuzzFeed quiz to tell me which Harry Potter character I am! 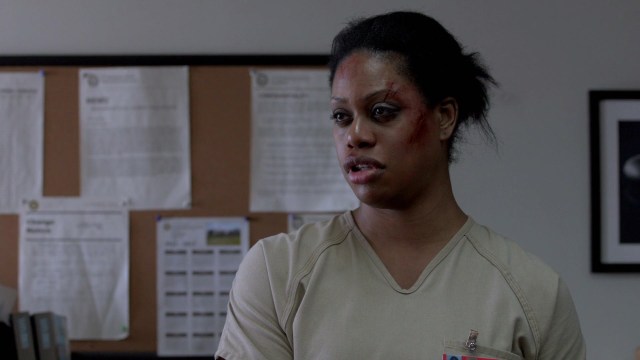 But it was Ginny Weasley.

Aleida and Maria talk about how having a kid is this weirdly addictive thing because they need you for food and shelter but you need them to validate your life and your choices and make you feel like the most important person in the world. Which leads to Aleida flashing back to the first day she dropped Daya off at the upstate summer camp with all the do-gooder teenage counselors who are nice kids but also have exactly zero experience living out their idealism in the hard world. Daya freaks out when Aleida leaves her; she just wants to go back home with her mama! So Aleida Harry and the Hendersonses her, telling her to go on and get out of there and she doesn’t want her around this summer anyway.

And then she goes to her car and sobs and sobs.

Hallway of Regrets and Recriminations 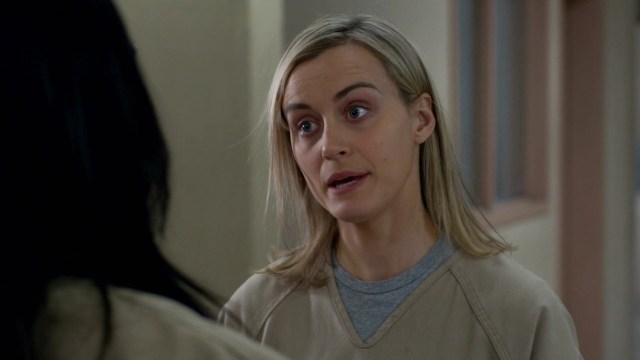 Have you ever noticed how the sun doesn’t even bother shining when I’m not awake? 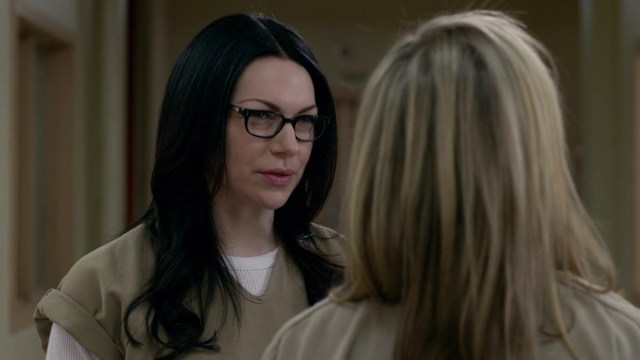 Alex: Oh, hey.
Piper: I’M FINE.
Alex: Yeah? Because I’ve been worried about you.
Piper: For what reason? Nothing out of the ordinary has happened. I am awesome, as usual, and so is my life.
Alex: Okay, well. Breakup’s still on!