Asheville is the ultimate Queer Girl Southern City (the fact that no homo has yet endeavored to chronicle Ashevegas’ gayness in a Queer Girl City Guide blows my mind). I mean, Chris Pureka live-recorded a song for her most recent EP at Asheville’s Grey Eagle. Come on now, y’all.

Ok, I may be a bit biased. I’m from the tobacco-chewin’, grits-cookin’ country 45 miles outside of Asheville – and when you’re young and queer, just about anywhere with more stop lights than fast food fried chicken places looks good. 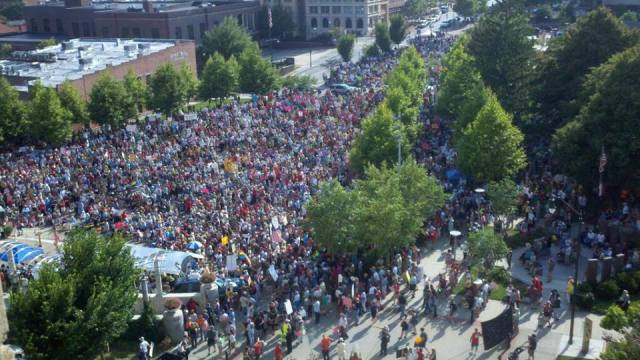 For a state that just passed our nation’s most restrictive Voter ID law and only a year ago elected some of the craziest tea party legislators this side of the Mississippi, I would say that’s a pretty decent crowd.

The North Carolina National Association for the Advancement of Colored People (NC NAACP) first organized Moral Monday in May as a way to peacefully decry the numerous regressive policies advanced by North Carolina’s newly conservative General Assembly (NCGA). Among the most anachronistic, truly terrible policies the NCGA passed are: a state budget that makes NC teachers the lowest paid teachers in the nation, a motorcycle safety bill that restricts access to abortion (really?!?), and a rejection of federal unemployment benefit dollars that leaves NC’s long-term unemployed without support after just 20 weeks at $350 or less.

Each Monday, from May to August, a growing group of Moral Monday demonstrators—hundreds, then thousands—gathered at the NCGA in Raleigh, NC. Many people, like me, came just to demonstrate, bearing witness to the NCGA’s actions and garnering state and national media attention for the cause. Others chose to continue their peaceful demonstration inside the Legislative Building—singing, praying, and refusing to leave until the police arrested them. At the close of the Legislative Session, more than 900 people had been arrested over 13 Moral Mondays.

Beginning in Asheville last week, Moral Monday is now on a statewide tour, rousing the energy of people across the state to hold their legislators accountable at home for what they did in Raleigh.

Side note: as a somewhat seasoned activist-queer, I got my protesting start at an anti-Iraq war demonstration in Asheville in 2003. Check me holding up the “Students for Peace” sign in the middle. Sixteen, not wearing a bra, and trying to inadvertently come out by rocking the queerest gear I could find – a white t-shirt and ripped jeans. 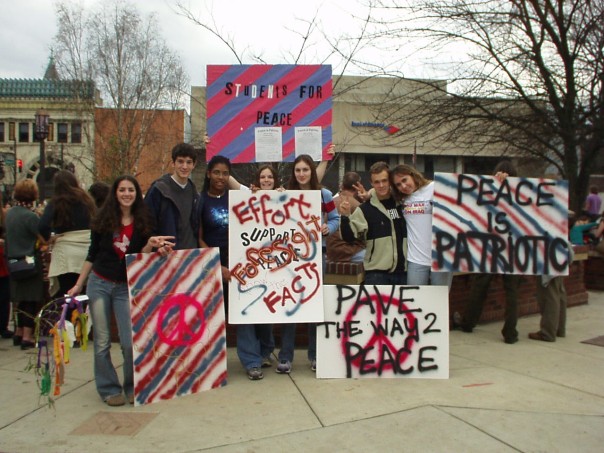 As Moral Monday grows and moves to cities across the state, their initial impetus—the universality of the struggle for justice—remains steadfast. As NC NAACP President Rev. William Barber chants (and everyone repeats) at the demonstrations, “Forward Together, Not One Step Back.”

And “forward together” we Tar Heelinians have gone. Each week, I’ve watched friends, family members, neighbors and peers participate — some of my favorite NC queer folk have even chosen to demonstrate or be arrested. See below for my BFF’s awesome cameo at Moral Monday 13. 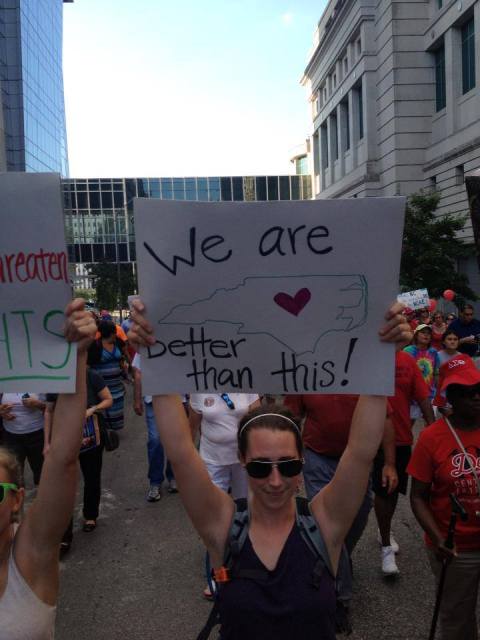 The NC NAACP and the coalition of organizations involved have advocated a broad, progressive agenda from the event’s inception. It is an agenda big enough to join the struggle for racial, gender and reproductive justice, immigrants’ rights, affordable health care, public education, workers’ rights and LGBT rights. It is big enough to attract folks of all stripes from all across the state.

Last year, Rev. Barber and the NC NAACP “came out” against NC’s Amendment One, pushing national NAACP leadership to endorse the fight for marriage equality. One scholar contends that this support of LGBT rights might even have been critical to the success of Moral Monday. Whether or not that is true, I think the role of solidarity across issues and identities in growing Moral Monday cannot be ignored.

I know that a lot of us Southern queers wear many activist/movement hats, doing paid and unpaid work towards justice for all. But I hope that as a part of the larger queer community, we continue to challenge ourselves (and our organizations) to see beyond marriage equality and toward a broader justice agenda.

I hope we continue to be active in the struggle, not just for queer liberation and equality but also for a more Moral Monday-style justice. An agenda of justice for all.

In NC and want to join Moral Monday? Check out Charlotte’s Moral Monday coming up on August 19th!

Hannah is an organizer and activist who hails from rural North Carolina (Sylva, to be exact). She loves mountains, (most) country music, group-centered leadership and swanky footwear. She aspires to one day have a readership beyond just her mom.