Editor’s note: All quotes are translated from Spanish by the author.

Lesbian activism in Nicaragua has often been subsumed by feminist and gay activism, so a group of badass lesbians are making themselves heard in a new way with a project called “Cuando Las Lesbianas Hablamos” – When Lesbians Speak.

La Corriente, a feminist organization based in Managua, produced the qualitative study with funding from Oxfam and the Basque government. On Wednesday, the organization presented the resulting short film and book for the first time to a crowd of about 75 lesbian, bisexual and trans women and our pals. It features the stories of four lesbian women: Jennipher Ellis, a black woman from the mostly-Afro-Carribean Atlantic Coast of Nicaragua; Tania Irías, a lesbian activist and mother; Geni Gómez, a Spanish feminist activist who calls herself “Nicaraguan not by the grace of God but by choice;” and Gaby Baca, Nicaragua’s only openly lesbian singer-songwriter.

In the film, they talk frankly about their experiences as lesbians in Nicaragua – coming out, experiencing discrimination and rejection, falling in love, and working as activists. Nicaragua decriminalized sodomy in 2008, but gay and lesbian families don’t have legal protections and benefits. Lesbians exist in a weird limbo between visible and invisible because, as Corriente projects director Cristina Arévalo told me, most lesbians are at least partially closeted, “but everyone knows where we go dancing, where we go to drink a beer, they know we’re here.”

The project provides a new avenue for people to understand the experiences of Nicaraguan lesbians.  Ellis talks about the dual discrimination of being black and lesbian, as well as being rejected by most of her family. For the book, she writes: “Although people are becoming more sensitive, there is discrimination, and I don’t know when it’s going to end. If I could turn back time, maybe I would be hidden. I would be safe in the closet.” 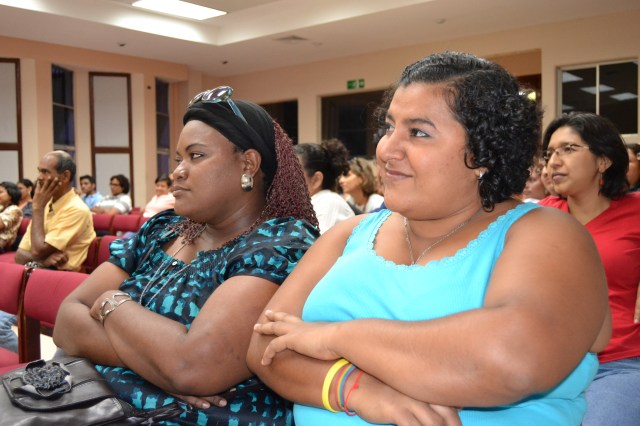 They each share their dreams – to have their families recognized legally, to live without social and legal discrimination, and for Irías, that her 5-year-old son “will never be made to feel ashamed to have a lesbian mom.” Goméz says:

“It’s fundamental that the mentality of everyone changes… In our schools, we need a sexual education that is really liberated and that contributes to the development of a person, of their relationship with their body, to their experience with sexuality, without fear, without shame, without blame, without norms. This is the greatest that we can aspire to.”

This film and the accompanying report has the potential to push us closer to those dreams. Baca, the songwriter, asked after the showing, “This is a great tool, now what are we going to do with it?”

“Share it as much as you can,” Arévalo replied.

So here I am on Autostraddle, where most of our readers don’t speak Spanish and will never visit Nicaragua, urging you to watch this film. There are no subtitles, but I hope you can see from the urgency in these four women’s voices and eyes that their struggles mirror our struggles as queer women all over the world. You know those moments when you can feel a palpable shift in the air that signals change and hope and possibility? That’s how it felt in the auditorium of the Catholic university where we watched the film. I forgot about the sour look I got from the security guard at the entrance when I asked where to find the event after I saw the smiles on every face in that room.

During the question and answer period after the presentation, my friend Katya got emotional when she said, “I’m so thankful to you all for making this. I’m thinking about the young girl in Estelí, like I once was, who will have access to this.”

The presenters spoke a lot about the threats people face when they come out and their reasons for not doing so and emphasized that it’s not right to pressure people to come out when they aren’t ready to. But for people who can take the risks, coming out helps destroy the closets of others until one day, we can live hand in hand in the dream world these women envision.