Jodie was pushing 110 mph on the interstate still covered in an Italian BMT. She didn’t have time to wipe the salami off herself, things were getting too intense. Within an hour she was at St. Louis International Airport dealing with a saucy Hertz attendant; and then, within an hour and half, she was on a flight to Los Angeles. Jodie spent the whole three and a half hour flight sweating in her seat. She knew that at this point, the metaphorical avalanche that was Blaze was picking up speed and would be even harder to stop. Jodie needed to act fast.

When the plane landed Jodie unbuckled her seat belt, grabbed her things, and ran to the front of the plane. A baffled flight attendant accosted her.

“Ma’am, you can’t be up here! You need to get back to your seat right now!”

This continued until the plane had taxied to the gate and once they opened the plane door, Jodie sprinted out. (Celebrities often repeat their names again and again to get what they want or avoid trouble. In fact, it was where Pokemon creator Satoshi Tajiri got the idea to have pokemon only say their names, after a trip to West Hollywood where Sigourney Weaver ran over his foot on a bike and instead of apologizing shouted “SIGOURNEY WEAVER, SIGOURNEY WEAVER” as she rode away.) Jodie ran through the gate, the terminal, and out of the airport to her car. Jodie was exhausted from all her travelling and just wanted to go home and take her shoes off, but there was no time. She jammed on the gas and was speeding down the 405 until she hit traffic, then she sat for 15 minutes, then she was speeding down the 405 again. Jodie pulled into a modest home in Santa Monica, jumped out of the car, and banged on the front door.

“WHAT?” Wanda Sykes shouted back as she opened the door.

“Jodie, you fucking pussy. What happened.”

“She’s being protected by one of the devil’s henchmen.”

“His name is Louis.”

“Oh, I only know Richard and Kevin. All really nice. Hard workers; the Devil has really put together a great team. But you couldn’t get to her?”

“Have you looked down recently?”

Jodie looked down and realized she was still covered in sandwich, which meant she had spent nearly five hours being decorated with cured meat. Jodie peeled some ham off her coat and ate it. Wanda looked disgusted; like someone had just used the word gay to describe something that was dumb or stupid. Jodie recognized this, and began again quietly.

“I need to see the prophecy.”

“What? Did you lose your copy?”

“I don’t believe that. You’re lying. How did you not get one?”

“THIS ISN’T BULLSHIT WANDA!” Jodie snapped, “WOULD YOU PLEASE JUST HELP ME OUT. I TRAVELED NEARLY 2000 MILES AFTER I GOT A GUN PULLED ON ME WHILE I WAS TRYING TO PREVENT THE LESBIAN APOCALYPSE AND I COME HERE AND ASK FOR ONE TINY FAVOR AND YOU’RE TEASING ME?” Jodie looked like she was going to cry. “OH AND THE WHOLE TIME, APPARENTLY, I WAS COVERED IN THREE DIFFERENT DELI-MEATS AND SHREDDED LETTUCE. NOW I GET WHY THE GUY AT BAGGAGE CLAIM ASKED ME IF I HAD JUST ESCAPED FROM A LUNCHBOX. I GET IT NOW. HA HA GUY. GOOD ONE. FUCK.”

Jodie was out of breath. She looked at Wanda sadly with her Jodie Foster cat eyes. Wanda sighed.

Jodie followed Wanda inside the house. Wanda led Jodie into a modern styled living room and directed her to sit on a chair. Jodie sat and Wanda walked over to a framed picture of Ellen Degeneres hanging on the wall. 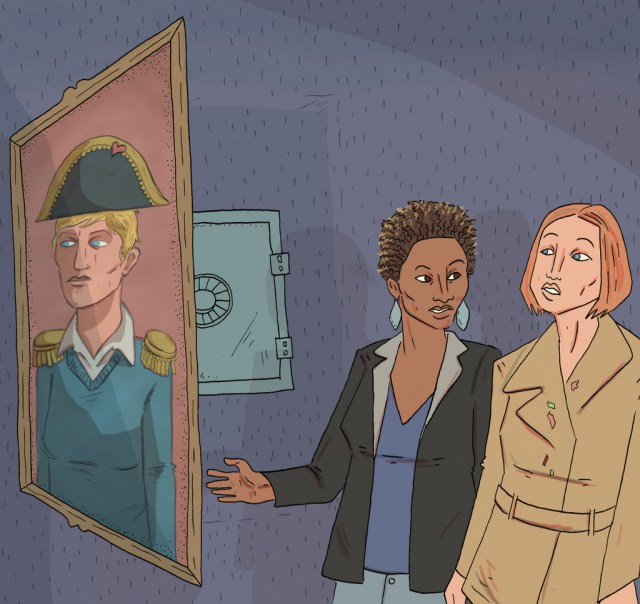 “Why does Ellen demand we all have a framed picture of her in our houses?”

“She really admires other world dictators who feature large pictures of themselves all over their country.”

“Wow, does Ellen really see herself as the dictator of lesbians?”

“I don’t know. But it’s also for this.” Wanda removed the picture of Ellen and revealed a safe behind it.

“Aw that’s so intense! Wait, then why do I have one in my living room if it’s not hiding a safe?”

“Probably because you’ll do anything Ellen says. That’s why she thinks you’re a pussy.”

Jodie thought deeply about this.

“Okay, here.” Wanda said, pulling an envelope out of the safe and handing it to Jodie.

“I think you were supposed to, but when we got to Kinkos we decided to print them on cardstock and then didn’t have enough for another copy.”

“Are you kidding me? Ellen has so much money! One time she asked me if she should buy Staten Island.”

Wanda shrugged. “I don’t know. That cardstock is nice.”

“Yeah…yeah it is,” Jodie resigned.

“My dearest prodigy,
I write to you with great trepidation. I have just awoken from a slumber where I had seen the most disturbing images. At first I thought it was my soul having another bandaged moment, but then realized, Ho! Tis a Prophecy. In it, a young girl of the marrying age rose from rural America with great musical talent. She played her songs here – in my beloved home state – where she caused a great stir in the Hearts of all the other young girls of the marrying age. Then, in a cocksure fit, did battle with a pair of Gemini and becometh sapphic women’s most beloved Minstrel. Not a soul could speak to her, for she could burst a being with just a look. Then once she cut her feminine locks, she sucked the power from us all. She crushed institutions with just her Moniker and evangelized successfully to even the most adamant agnostics. As she crossed o’er the land, we slowly withered, til we were dreamt of no more.

She had one weakness; a Secret? A ghost from her past? Because it was a Dream, I cannot remember. And ‘tis verily shitty that I forgot, or this entire Calamity could be stopped.

I cannot say the Hour it will happen, but know that she must be stopped. I am entrusting you, my dearest prodigy, to make sure that no one Lesbia starve you of love. It may be that you all must come together as a final Effort to thwart her. All must heed the call, for it is a matter of survival. Make haste-for if you strike too late, you will be Dammed!
Signed,

Jodie looked up at Wanda.

“There’s another page,” Wanda said. “But it was just a bunch of hyphens.”

“Well, what do you think? We need to anticipate here.”

“Hm, we know the haircut is the point of no return. But the first thing she does rise up from ‘rural America’. You said she was in Missouri?”

“So that checks out. Then she goes to…” Wanda looked back at the page, “Wherever Dickinson lived. Where was she from?”

Wanda pointed Jodie to a laptop that was sitting on the island counter that separated the kitchen and living room. Jodie grabbed it and they both sat on the couch. Wanda opened it, typed in a password, and on the screen was a google images search for “Wanda Sykes”.

“Were you googling yourself?” Jodie asked.

Wanda minimized the browser revealing Photoshop. In the workspace was a clearly doctored photograph of Wanda as an astronaut.

“I want to go to space.” Wanda said. Jodie nodded understandingly. Wanda pulled the browser back up and searched ‘Emily Dickinson home’.

“It appears as if she lived in…Amherst, Massachusetts,” Wanda said. Jodie’s eyes widened.

“Oh God,” she whispered. She grabbed the computer and pulled up a map. She pushed her finger against the screen over where the map said ‘Amherst’ and slowly dragged her finger southwest. Wanda squinted to see what she was now pointing at, but when she saw it her eyes widened. The women looked at each other and screamed. Jodie fainted.

“Oh, you little pussy,” Wanda said, and picked up her computer and quietly finished her vision board.