Many people have at least a passing familiarity with ENDA, the legislation which would protect Americans from workplace discrimination based on sexual orientation and, in the inclusive version of the bill, gender identity. The gender-identity-inclusive version of ENDA has proved apparently nearly impossible to pass at the federal level; although it’s been at different levels in Congress since 1994, there’s still no word on when the inclusive bill might be a reality. 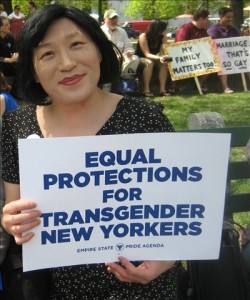 There are also moves being made for ENDA protections on the state level, however, and the question of how to secure protections for gender expression and identity is still present for local activists and legislators. In New York state, the discussion is about GENDA, which would specifically protect trans* individuals from workplace discrimination based upon their gender identity. The Empire State Pride Agenda seems as if it will specifically focus on GENDA, and has hired a “high-profile… lobbying and PR team” to do so. There have been divisions within the activist community regarding the organization’s expenditure of effort and resources on marriage equality as opposed to issues like trans rights, and the team that Empire State Pride has hired is in fact the same one that helped secure marriage equality for NY in 2011.

There have been some major changes in both Empire State Pride Agenda and the New York gay activist community since marriage equality was won in New York; Empire State’s executive director, Ross Levi, was fired, although the circumstances of his leaving are unclear. GENDA has already been attempted and failed in New York several times before, and it doesn’t necessarily have the level of support from the gay community that an issue like gay marriage did in 2011. Melissa Sklarz, leader of the Stonewall Democratic Community, describes the process of trying to push GENDA as advocating for a “mostly faceless invisible community.” It’s an ambitious plan for what’s already been difficult legislation to pass; Republicans are already criticizing it with the same “bathroom bill” language they’ve used in the past. If the team that made marriage equality a reality in New York can make progress on an issue that’s been stalled in Congress since 1994, however, then this could be a hugely instructional campaign for other groups that care about trans rights and protections. New York’s progress with marriage equality has already impacted the momentum of movements in other states; we can only hope that their work with trans* rights will have a chance to do the same.