It’s not a secret that magazines make women feel bad. We talk about it all the time. Like many other teenagers, as a youngster I never saw myself reflected in the photoshopped images and super-skinny smiling blondes of popular teen magazines and as an adult that hasn’t really changed much. Photoshop technologies continue advancing and the industry relies on increasingly younger models. But this past week, two mainstream magazines were confronted about their publications’ relationship to underage and underweight models and the glorification of eating disorders. They took vastly divergent courses of action. 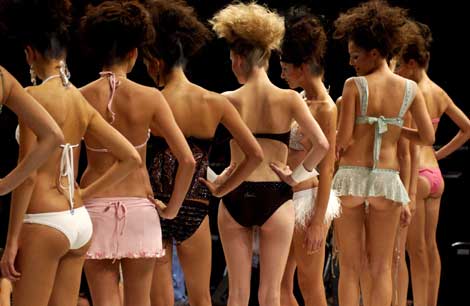 Seventeen Magazine Has Something To Hide, No Shame About It

I started reading Seventeen magazine at thirteen, so it makes sense to me that my colleague Julia Bluhm at SPARK — an organization focused on girls’ sexualization and the media representation of young women — is only fourteen and is actively engaged in a conversation with Seventeen Magazine about how they represent young women’s bodies.

Bluhm is a ballerina and a feminist, and has a keen eye for what makes girls her age feel anxious and uncomfortable about their bodies. Anyone who reads Seventeen knows that images of super-blonde, leggy, white women in magazines for people going through puberty and high school can lead to some of those feelings. I distinctly remember flipping through Seventeen as a teenager and wondering when I was going to — POOF! — turn into one of those models. (Funny story… I never did.)

Julia took action, coordinating a widely successful petition that garnered media attention and over 25,000 signatures in its first days. Her request was simple: publish one photo spread per issue that is not altered, in any way, by using digital technology like Photoshop. She was also present at a NYC demonstration outside of their offices with her SPARKmates in the area:

Bluhm — an 8th grader from Waterville, Maine, who took the day off from school to come to the New York demonstration with her mother — decided to start the petition because, she says, “We know that Photoshop can be very harmful to girls because they think they have to look like these images. But it’s not even real, it’s Photoshop. So it’s kind of impossible to look like that in real life.” Bluhm coordinated her petition with SPARK, a group she’s active in and which organized today’s protest — on the SPARK Web site, you can see posts Bluhm has written about body image and ballet, her chosen extra-curricular, women athletes she admires, and why it bugs her when her classmates call her “ladylike.”

“I chose Seventeen to target because I know that Seventeen is already doing a lot to help girls to feel better about their body image,” Bluhm said, citing the magazine’s Pretty Amazing contest, which offers college scholarships to girls who make outstanding contributions to their communities through volunteer work.

Seventeen offered her a meeting, but instead of directly responding to Bluhm’s call to action, they offered a defensive view of the magazine’s publishing routine that completely skirted the issue:

We’re proud of Julia for being so passionate about an issue — it’s exactly the kind of attitude we encourage in our readers — so we invited her to our office to meet with editor in chief Ann Shoket this morning. They had a great discussion, and we believe that Julia left understanding that Seventeen celebrates girls for being their authentic selves, and that’s how we present them. We feature real girls in our pages and there is no other magazine that highlights such a diversity of size, shape, skin tone and ethnicity.

Vogue Magazine Makes Rules, Is One of My Favorite Publications of All Time Vogue Magazine chose a more proactive defense. The magazine, especially international publishers, has been hit with some harsh criticism in the past over their use of underage models and their sickly-looking spread girls (one of Vogue’s many problems regarding diversity).

It hasn’t helped that editor Anna Wintour has remained a staunch defender of such practices. In 1998, Wintour told Oprah that she needed to lose weight for her covershoot, and when questioned about that incident recently she defended the use of Photoshop to make people “look their best,” and condemned Americans for worrying too much over anorexia instead of obesity, citing a recent trip to Minnesota where  she said she could “only kindly describe most of the people I saw as little houses.”

Conde Nast, the organization publishing Vogue internationally, announced Thursday that every editor, beginning with the June issues for this year, would have to uphold the following principles and guidelines. This is called “The Health Initiative,” and is a pact among 19 Vogue editors from around the globe:

2. We will ask agents not to knowingly send us underage girls and casting directors to check IDs when casting shoots, shows and campaigns.

3. We will help to structure mentoring programs where more mature models are able to give advice and guidance to younger girls, and we will help to raise industry-wide awareness through education, as has been integral to the Council of Fashion Designers of America Health Initiative.

5. We encourage designers to consider the consequences of unrealistically small sample sizes of their clothing, which limits the range of women who can be photographed in their clothes, and encourages the use of extremely thin models.

6. We will be ambassadors for the message of healthy body image.

Vogue is the only specific Conde Nast publication expected to adhere to or apply these guidelines in their work.

Although it remains unclear how these guidelines will be interpreted and who will be watching out to make sure they’re followed, this is definitely a beacon of hope in an extended industry that typically focuses more on financial gain and aesthetic appearance than on goodwill:

As British Vogue notes, the stated goals of the initiative hew closely to those of the CFDA’s Health Guidelines, which include a minimum age requirement (16 years) and a commitment to preventing eating disorders through education.

The practical innovation of Vogue’s Health Initiative, however, is a focus on magazines rather than the runway. The past efforts of the CFDA (and Britain’s British Fashion Council) were only effective to the point of addressing problems during Fashion Week. With Vogue’s new move, models working year-round in photo spreads will meet the same requirements — and get the same help.

One of the main concerns, and criticisms, of the new policy is, ironically, that all of the good done by these standards could invariably be undone by Photoshop, which is often used to make women appear younger, thinner, and more typically idealized than they would ever appear in real life.

This Is How I Feel

Magazines, as mentioned above, play a hugely important role in the development and sustaining of girls’ and women’s self-images. They’re also hugely prevalent pieces of our culture, with Vogue and Seventeen leading the way because of their sheer popularity and branding power. Vogue took good steps last week, although we will have to wait to see how the results appear to us. (As a subscriber I am constantly disappointed in their lack of true diversity in race, ethnicity, and body size, as well as their use of “tribal” themes – some of which may be allieviated by these guidelines.) As for Seventeen, well, it is a truly pathetic moment for a culture and a business when 25,000 real and authentic audience voices are overpowered by an outdated and cruel industry standard of beauty.

These two incidents also show us, however, that the power of being heard is affecting how the media represents our experiences. When we express outrage, we sometimes are heard. And using the direct route of feedback to your favorite publications and public action when they don’t listen is stil a tried-and-true path to success. These are both victories. Let’s never disregard that.

As I always say: live bravely and live honestly. Maybe one day, Vogue will publish a spread called “You Do You.” For now, there’s always our girl galleries.