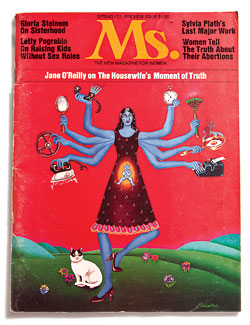 New York Magazine has an interesting look at Gloria Steinem and the history of Ms. magazine, oral-history style.

Steinem: Clay gave me my first serious assignment when he was an editor at Esquire: a piece on the contraceptive pill.

Clay Felker in the Washington Post, December 12, 1971: “She doesn’t like this story but I saw her standing outside my office one day and I thought she had great legs. I gave her her first bylined assignment and it was excellent.”

There is a sense that quite a few people involved with getting Ms. started were not necessarily feminists “in the classic sense.” However, this does not always come across as a bad thing. The article includes pieces of personal conversations, article excerpts, and interviews from before the founding of the magazine, until its falling popularity in the 1990s and revival in 2001. Basically the piece is like How Sassy Changed my Life except in miniature, and not about Sassy.

Lindsy Van Gelder (contributor, 1977–92): Anything that equated feminism with lesbianism lost Ms. potential advertisers, and the first article in which I came out [February, 1984] was radical even by the lesbian standards of the day. It was called “Marriage As a Restricted Club,” and it was about my decision not to attend weddings of straight friends and family members. It was also a plea for straight feminists to understand that they had rights I didn’t.

Steinem: It was always clear to me that feminists were going to be called lesbians … so the only answer was to make clear that being a lesbian was as honorable as any other way of living. When people on the road asked in a hostile way if I was a lesbian, I always said, “Not yet.”

Another feature in NY Mag this week wants to tell you all about feminism and women writing on the Internet, from the founding of Jezebel to Feminist Ryan Gosling, albiet slightly dramatically:

“Perhaps more important, these sites inspired an even sharper cadre of commenters, who bonded and argued, sometimes didactically, sometimes cruelly, but just as often pushing one another to hone their ideas—all this from a generation of women written off in the media as uninterested in any form of gender analysis, let alone the label ‘feminist.’ Freed from the boundaries of print, writers could blur the lines between formal and casual writing; between a call to arms, a confession, and a stand-up routine—and this new looseness of form in turn emboldened readers to join in, to take risks in the safety of the shared spotlight.”

Their (admittedly abridged) list of feminist blogs/”The Lady Blogosphere” does not mention Autostraddle, which is quite openly (and singularly) a queer feminist blog, or any other website dedicated to a queer female audience.

And on the internet response to SlutWalks:

“These events weren’t polite demands for legislative change; they were raw and sloppy theatrical displays, ecstatic bonding experiences that managed to be at once satirical and celebratory, alienating and illuminating. Not coincidentally, they were also the kind of protest that was hard to ignore, since they were designed to capture the camera’s (and the media’s, a.k.a. my) eye. And SlutWalk is more public still: Even as we march, it is being tweeted and filmed and Tumblr’d, a way of alerting the press and a way of bypassing the press. I am surrounded by the same bloggers I’ve been reading for weeks. And though bystanders cheer us on (two gray-haired women dance topless in a window), this is very much a march for young women, that demographic that has been chastised throughout history for seeking attention—and ever more so in recent years, as if publicity itself were a venereal disease, one made more resistant by technology.

But then again, who is going to hear your voice if you can’t get their attention?”

Have you read these articles? What did you think?