The SlutWalk movement is taking the world by storm as what became a global series of protests and rallies to end victim-blaming and sexual assault. Inspired by a Toronto Police Officer’s comment that women could avoid sexual assault by not “dressing like sluts,” marches have been organized on various continents, in various cities, and by various kinds of people. Altogether, they have featured the world’s finest sluts. And when SlutWalk rolled through Washington, D.C., I had the unbelievable opportunity to be involved as a speaker.

To be honest, I almost turned it down. Or, I guess, I almost didn’t take it. My friend said something in a bar. “You’re talking at SlutWalk? Carmen, talk at SlutWalk.” But I didn’t know what to say, or where to start. I’ve been doing work on the issue of sexual violence for three years now, working intensely on campaigns as a partner, at organizations as an intern, and even by myself on my educational project (con)sensual, which I’m trying to launch nationally right about now, but I didn’t know what to say.

But in the end, I took it. Lucky speaker number seven. A part of me felt like I had to. I wrote a speech the night before the march, at 1 AM, eating Burger King with my friends. We were watching Celebrity Rehab, I think. Or the Jersey Shore.

Eventually, it was August 13 and I was speaking to 2,500 people who were covered in rain water. 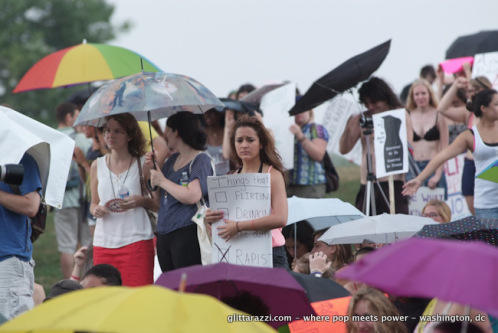 I was standing at the Sylvan Theater, right in front of the Washington Monument. My name tag said “Carmen (Fucking) Rios,” and I had cut my shirt into a crop top tank top, and I was still wearing my aviators, and – I want to share that moment with you:

Hello, everyone! Thank you for coming to SlutWalk D.C., and the biggest wet t-shirt contest in history.

Now, it took me 18 years to learn that sex could be on my own terms.

Until then, my sex ed. had been standard: condoms, babies and birth control. Oh, and that video of a woman giving birth. I learned then that sex was something I would submit to, and probably not enjoy. And it would probably happen on someone else’s terms, because women don’t make the terms in sex ed. I also learned that women who didn’t follow those rules would be punished. I would be a slut. I would be without safety and without support.

It’s no surprise that that education didn’t get me far. Hell, I’m more surprised that I made it out alive and am standing right here, right now, in front of all of you. Because nobody in sex ed. told me how to ask for sex, or that I could. Nobody told me I had sexual rights. Nobody told me I deserved safety. And nobody told me about consent.

Consent is a powerful concept for our world, especially as it continues to struggle with victim-blaming, sexual assault, and misogyny. Because consent gets all of us talking about sex. To our partners. To ourselves. A world built on consent: no silence and no shame. One free from violence and coercion. One based in autonomy, respect, and power. A world where “no” is respected, and – more importantly – “yes” comes without consequences. Consent liberates us. It gives us a voice. A world built on consent is built on our terms. On our voices. 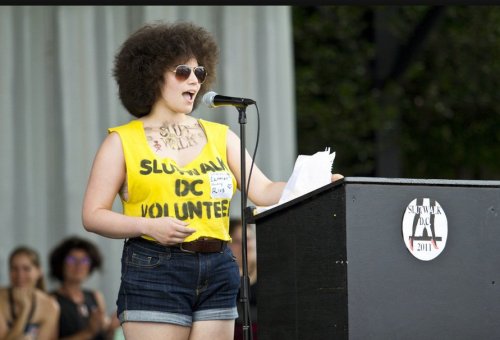 I started (con)sensual in 2009 because I wanted to get everyone talking. I wanted to hear every voice. And I still do. Because the time to dismantle rape culture and end our culture of shame is now. Because that time should have been a long time ago.  And SlutWalk belongs in D.C. because this is a city of loud voices – but not ours. We have watched Washington go silent on sexual violence, comprehensive sex education, our bodily autonomy, our human rights, and our safety. That is unacceptable. The voices in Washington should sound more like ours.

So we must keep making noise, until that noise fills every school, until it fills every office, until it fills every life. Until everyone is free to speak up, and speak out, and until the world is ready to listen. Until we’re free to live on our own terms. The struggle to end violence belongs to everyone. And only with our voices can we all come together – in solidarity, and with respect, and on our terms.

So let’s keep rocking, sluts. Because you look great – but I bet you sound even better. Thank you.