America’s obsession with the parenting skills of gay people is almost as old as the history of gay people in America. For years, it was assumed that all gays were degenerate sexual deviant drug addicts with no interest in relationships or family, and then it was presumed that we were inherently unfit parents. And then, when actual research was done into the realm of gay and lesbian parenting, many studies found little or no measurable difference between parenting outcomes of gay and straight couples. In fact, in 2005, the APA issued a brief stating “Not a single study has found children of lesbian or gay parents to be disadvantaged in any significant respect relative to children of heterosexual parents.” In 2010, a new study found that children of lesbian parents were significantly less likely to report abuse than those of straight parents; there were even studies claiming that lesbians were measurably better parents than straight ones, although it wasn’t particularly credible. 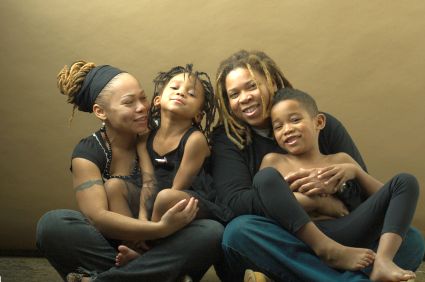 Now, a new study by Mark Regnerus published in Social Science Research may be establishing a new paradigm in terms of research on gay and lesbian parents (well, mostly lesbian parents, but more on that later). (There’s a downloadable PDF of the study in full available here.) While the study and methodology are both fairly complex, they can (sort of) be distilled to two basic claims:

1) The studies done previously on gay and lesbian parents aren’t methodologically sound or based on statistically significant samples, so their results aren’t very meaningful. Or, as Regnerus puts it:

Of the 59 studies referenced in the APA brief, more than three-quarters were based on small, non-representative, non-random samples that did not include any minority individuals or families; nearly half lacked a heterosexual comparison group; and few examined outcomes that extend beyond childhood such as intergenerational poverty, educational attainment, and criminality, which are a key focus of studies on children of divorce, remarriage, and cohabitation.

2) When samples are more significant and methodology is more rigorous, results actually show that young adult children of gay and lesbian families (but especially lesbian families) actually show very different outcomes, and usually negative ones. They’re significantly more likely to experience mental illness, poverty, sexual violence, and substance abuse — essentially, many of the things that the religious right warns about.

Of course, the religious right already has some studies up their sleeve that also support these results, like the ones that “experts” such as David Blankenhorn have tried to reference in contexts like the Prop 8 trial. The issue is that those studies are also very unsound. For instance, the studies Blankenhorn tried to claim proved that a father was a necessary part of a household only compared “intact” heterosexual families with other heterosexual families in which the father had abandoned them, been jailed, or died. There aren’t meaningful comparisons to be made here to gay families. Regnerus’s study, however, is much more legitimate. It studies much larger sample sizes than previous studies, and uses data from a large family structure data collection project that means its gay and lesbian respondents weren’t self-selected, as in earlier studies. (The reason it was able to do this is that it also had much more money to work with than most earlier studies, a whopping $785,000.) It also introduced elements intended to control for factors like anti-gay bullying, education, and family income, which is meaningful because the results are less likely to be attributable to the fact that lesbians families may be poorer, or that anti-gay stigma may mean that the children of gay parents face discrimination.

This doesn’t mean that the study is entirely unproblematic, or is going without criticism — especially from gay organizations. Box Turtle Bulletin has an excellent breakdown of what some concerns with the study may be; for instance, it categorizes anyone who answers yes to the question “From when you were born until age 18 (or until you left home to be on your own), did either of your parents ever have a romantic relationship with someone of the same sex?” as a child of a gay male or a child of a lesbian, depending on the parent. (The full questionnaire given to survey participants can be found here.) Of course, having a romantic relationship with someone of the same sex doesn’t mean you’re gay or lesbian, and a “yes” answer to the question may have meant their parent had a short affair while remaining in a heterosexual marriage. This inconsistency is something Regnerus himself acknowledges in the study, but it’s a little bit messy in terms of data organization; it means that  the homogenous “control” group, “intact” heterosexual families, is being compared with a heterogenous sample of families in which parents have had varying levels of same-sex contact. (The study also found a very small sample size children who reported gay male parents, and found significantly less difference between gay male parents and heterosexual parents than between lesbian parents and heterosexual parents.)

It’s also notable that since this study looks at “young adults,” it is essentially reporting on the past generation of gay parents, parents whose kids have already left the home. The world looked very different for gay families then — there were even more barriers to their psychological and economic wellbeing than there are now — and these results may not meaningfully reflect on the generation of parents raising kids now. Some critics, like William Saletan at Slate, argue that the real result of the study is just that gay and lesbian families (especially those who are headed by what Regnerus calls “emergent” gays or lesbians, people who came out and pursued same-sex relationships after having children) have similar outcomes to other families that aren’t “intact heterosexual families,” including adoptive families, divorced families, and foster families. There’s no reason to be ashamed of having different outcomes from ‘the norm’ when you’re not ‘the norm;’ gay families, as well as adoptive and divorced families, will naturally face different challenges and therefore look slightly different in statistics.

Understandably, there’s concern that these results will be used as ammunition by groups like NOM, Focus on the Family, the American Family Association, and Protect Marriage — after all, they’re already making this argument, and what will they do now that there’s a comprehensive and well-funded study that seems to support their findings? To his credit, Regnerus has made a point of disassociating himself from those who would use his results to make claims about the rights or legal privileges of gay parents, saying:

I would be remiss to claim causation here, since to document that having particular family-of-origin experiences—or the sexual relationships of one’s parents—causes outcomes for adult children, I would need to not only document that there is a correlation between such family-of-origin experiences, but that no other plausible factors could be the common cause of any suboptimal outcomes… This study cannot answer political questions about same-sex relationships and their legal legitimacy.

One would hope that, as in the Prop 8 trial, a competent lawyer would be able to do a thorough reading of the study and could point out the reasons why this study isn’t a wholesale condemnation of gay parenting skills if the issue came up in court. And while the criticism that a homogenous sample of “intact” families is being compared with a heterogenous sample  of many kinds of families is valid, it also seems like it may be possible to build off of Regnerus’s work and use some of the same data to construct what may be a more meaningful comparison.

Because that’s another hugely important outcome of this research – the hope that it may create an opportunity for more research. Almost all issues pertaining to LGBT needs, from our family lives to our medical needs, are woefully understudied. This means that even organizations and entities that want to help us may be at a loss, because there’s no information to recommend policy guidelines or possible solutions to our community’s problems. While it’s very frustrating that its results may be so easily misconstrued, it’s also a giant landmark that we finally have a study this well-funded to look at. Because even without looking at the researcher’s conclusions, the data is in many ways illuminating. One of the less-discussed findings of Regnerus’s work is that the typical gay family is less likely to be white, highly educated, well-off and married than much of our representation in the media would suggest:

The use of a probability sample reveals that the young-adult children of parents who have had same-sex relationships (in the NFSS) look less like the children of today’s stereotypic gay and lesbian couples—white, upper–middle class, well-educated, employed, and prosperous—than many studies have tacitly or explicitly portrayed… Rosenfeld’s (2010) analysis of Census data suggests that 37% of children in lesbian cohabiting households are Black or Hispanic. Among respondents in the NFSS who said their mother had a same-sex relationship, 43% are Black or Hispanic. In the NLLFS, by contrast, only 6% are Black or Hispanic.

If our goal is to support gay and lesbian families and their children, then we have to start by knowing who they are. And while the real meaning of Regnerus’s results might not be quite so simple as “children of lesbians are worse off than children of straight people,” if there are unique challenges facing the children of gay parents (which does not necessarily imply that those challenges are the fault of those parents), wouldn’t it be better for us to know about them? We desperately need thorough and well-funded research to provide us with the information we need to take care of our own community, and the fact that any group wanted to shell out $785,000 to study us is an excellent sign. Regnerus’s study isn’t the last word in research on gay families, or gay health, or anything else. If anything, it may be a sign that we’re entering a new era — not of scientifically proven bad parenting, but of real sociological research starting to replace assumption, fearmongering, and unexamined prejudice.