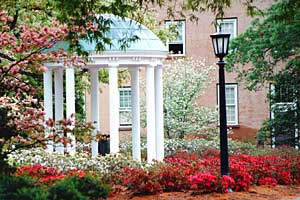 I’ve lived in Chapel Hill for four years now and I love it. I’m a senior at University of North Carolina-Chapel Hill so most of my experiences are as a member of the university, but the overall Chapel Hill/Carrboro community is extremely welcoming for queers. It’s a very liberal place and has certainly earned it’s nickname as “a Southern slice of heaven.”  Lately North Carolina has been in the news following the passage of Amendment One, but believe it or not, Chapel Hill is definitely a place where Gay is OK. 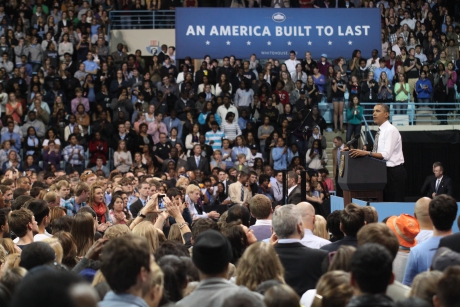 Obama at UNC Campus Via The Daily Tar Heel

The university is a huge part of the town and if you’re lucky enough to be coming here for college then you’ll find a great LGBTQ community with lots of resources available to you. Our Gay, Lesbian, Bisexual, Transgender and Straight Alliance (GLBTSA) is the largest LGBTIQ student organization in the Southeast. In addition to hosting weekly meetings and awesome events, GLBTSA publishes the oldest LGBTIQ student publication in the nation and hosts the Southeast Regional Unity Conference every year, where progressive LGBTQ friendly folks from the region all get together for one awesome weekend. You can read more about the queer scene at UNC here.

Aside from its queer friendly atmosphere, the university in general is also just really amazing. We were the first public univeristy in the country, we’re regularly regarded as a “Public Ivy” and we’ve been ranked the best value in public higher education ten consecutive times. If you’re into sports, we have (in my humble opinion) the best basketball program in the nation, with alumni like Michael Jordan, Jerry Stackhouse, Rasheed Wallace and Vince Carter. We also we just had Obama and Jimmy Fallon come visit, so we’re kind of a big deal. 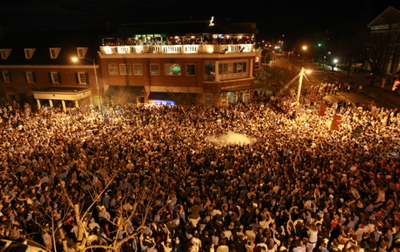 Chapel Hill is a fairly small town so there are no exclusively lesbian clubs… or exclusively queer clubs for that matter. There are, however, gay nights at several places. You can find a full schedule of those events here.

I’m not going to lie to you, all of these events are heavily male and all the gay boys bring their straight female friends, so it’s hard to tell if any of the women are actually queer. If you want my opinion though, I’d say to just hit on everything that moves. As someone who other people often assume is straight, I’ve realized that you really can’t judge a book by its cover so you might as well just be friendly to anyone you think is cute. Even if they are straight they’re at a gay bar, so it’s not like they’re really allowed to freak out. If that’s just too much guess work for you though, I’d say head to some of the larger gay clubs in Raleigh or Durham. They’re not too far away and you’re likely to find more gay women there.

If the club scene isn’t your thing, some women-only events/activities that you might want to check out are the Triangle Area Lesbians Meet-Up that happens every Thursday between 6-8pm at Foster’s Market in Chapel Hill (contact TriangleAreaLesbians [at] gmail [dot] com for more information), the Common Woman Chorus, or this nice meetup group for single lesbians over 40 in Chapel Hill. Again, if you’re a student you could check out some of the events hosted by GLBTSA.

If eating is your thing you like to be able to do that in public without someone staring at your your girlfriend’s unshaven legs, then you’re in luck! Most restaurants and cafes here are gay-friendly and you can feel pretty comfortable holding hands on a date almost anywhere. There are, however, a few places I’d recommend over the others:

Open Eye Cafe (101 South Greensboro Street, Carlboro) A great coffee shop filled with comfy couches and more alternative lifestyle haircuts than you can count. It is consistently voted as one of the best coffee shops in the area and serves wine and beer along with its whole-leaf teas and delicious coffee. There are usually great local musicians playing here on the weekneds and they often showcase local art throughout the restaurant that you can buy or just stop in and admire.

Cafe Driade (1215 East Franklin Street, Chapel Hill) A small coffee shop nuzzled in the woods with some great walking trails going out behind it. This is Open Eye’s sister coffee shop so it has a lot of the same offerings, just in a more cozy environment.

Weaver Street Market (716 East Weaver Street, Carrboro) A co-op grocery store that also has a salad bar and hot food bar. It has a great outdoor eating area that’s always packed with awesome people and it’s in the heart of downtown Carrboro so it’s a great place to spend the day. They also host lots of events, like their Friday Night Wine Tastings and their “Jazz and More Brunch” every Sunday from May to October on the lawn. 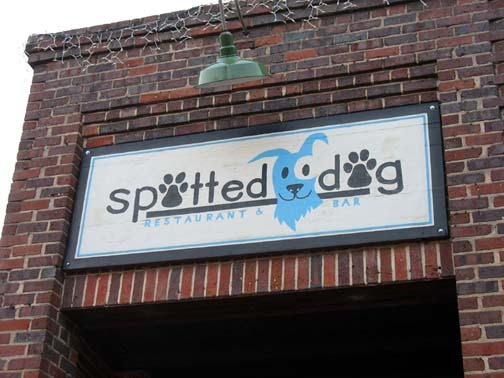 The Spotted Dog (111 East Main Street, Carrboro) A lesbian-owned-and-operated restaurant in Carrboro with lots of healthy eating and vegetarian options.

Carborro Farmer’s Market (301 West Main Street, Carrboro) Saturdays from 7:00am to noon and Wednesdays from 3:30pm to 6:30, a local farmer’s market that’s well known throughout the area and has been running for over 30 years. 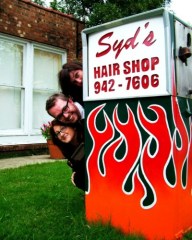 For those of you who have already settled down, Chapel Hill and Carrboro are relatively queer-family-friendly. They offer domestic partnerships to same-sex couples, although that could change in the aftermath of Amendment One. If you’d like to meet other queer parents, the group Triangle Families hosts monthly meetings for LGBTQ families in the area.

From an economic standpoint, the cost of living is higher than neighborhing Durham. Nevertheless, it’s a safe place to live, is walking-and-biking friendly and all the city busses are free. I wouldn’t want to live anywhere else in the state. 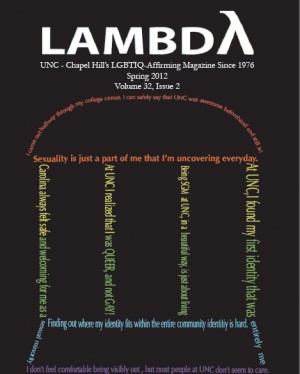 The UNC LGBTQ center holds a Q Group every Monday during the school year to offer peer support and talk about anything related to sexual orientation/gender identity and gender expression. They also have drop-in support hours where you can just show up and talk to a counselor about anything on your mind.

If you’re trans* or otherwise gender-identified or questioning and would like to spend some time with like-minded people, there is a trans discussion group every 2nd and 3rd Wednesday at Internationalist Books in Chapel Hill and another discussion group, Trans Talk Tuesday, is held at Open Eye Cafe in Carrboro every 1st and 3rd Tuesday of the month.

Once you know where to look you’ll find that there’s something for every queer woman to do in this wonderful town of ours, and as General Johnson said, Carolina girls are the best in the world.