Nicole Byer has been around.

I’m about to do the good old hipster thing where I say “Yeah — I knew about them before [insert thing here person is newly known for], you know since they were on [insert show that everyone else has def seen before but for some reason you think you’re the only one who has because you have a complex you’ve yet to work through in therapy].”

But anyway — I’ve known of her before her well-deserved Nailed It fame, and before she started one of her many podcasts, Why Won’t You Date Me? I discovered her while watching MTVs’ talking head show, Girl Code. Like any other twenty-something living at home after college, I watched it on MTV while I ate everything in my parent’s fridge whilst figuring out what was next.

With her valley girl inflections and babed out style, Nicole makes her NYC audience laugh and sometimes cringe with secondhand embarrassment. With her hair in a PERFECT half-up half-down pony, and wearing a leopard print top with a sweet purple pantsuit, she looks like a hot lavender menace. It should be noted that Byer doesn’t do labels; she’s said she would and has dated folks of any gender, but sticking a name on her sexuality just isn’t her vibe. That means that all of you reading have the opportunity to woo, wine, and dine her — but 90% of you probably don’t deserve her so I am wondering who will prevail. 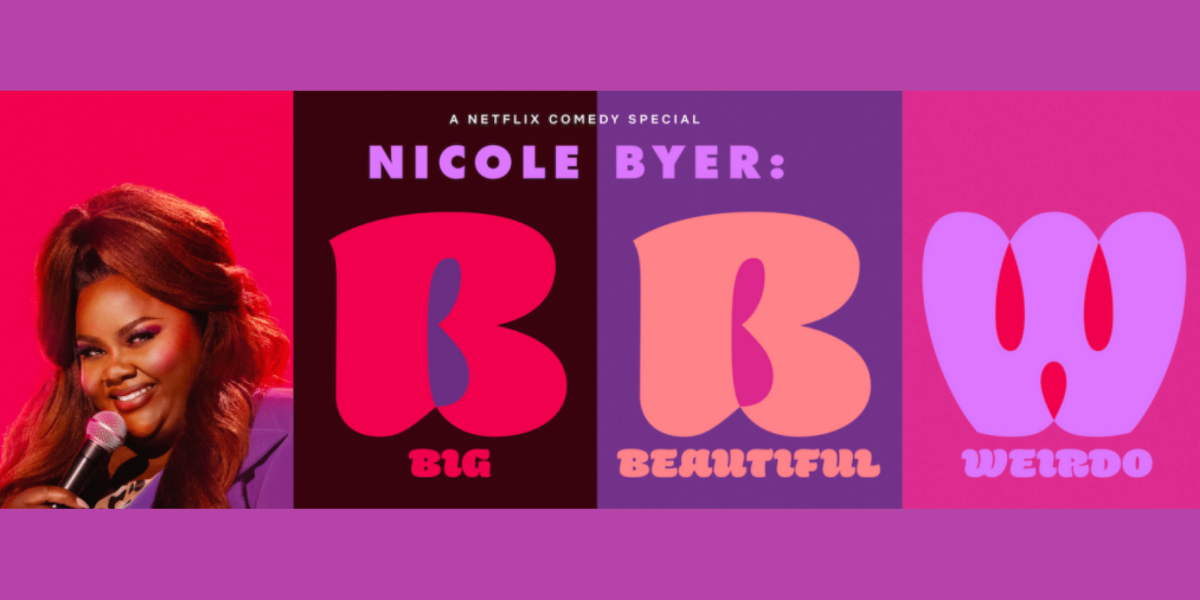 In the one-hour special she goes through stories that are inherently Nicole Byer. We hear about her time in quarantine which involves a funeral for a cat, get her theory on how the story of our favorite wizard may be inspired by the KKK, and my favorite — her deep want of Gloryholes for girls. Now just like Nicole, I am someone who is persistently craving sex (I was gonna type consistently craving cunt but I know how some of you girls are shy or whatever), so that last bit really hit home. Because as much as she wants to be slurped and suckled at a Gloryhole, I want to squirt in steam at a bathhouse, but alas, we are both left dreaming of our simple sexual wants.

I LOVE how much and how (gosh I hate this buzzword) freely Nicole talks about sex; I always have. It’s one of the things she’s most known for and dare I say, I don’t think she minds that. This special made me think about the times I stayed up late and watched Comicview, where Black women comedians like Lunelle, Sommore, Mo’Nique, and Loni Love talked about fucking in ways that I had never seen big, Black women do. I was used to watching my family laugh at the jokes their male counterparts (who were often fat themselves) made about fat girls, doubling over at what sometimes, yeah, was funny, but most times made me feel like something was off. But when those women hit the stage and took the jokes back — it felt different. Yes, they were making jokes about suffocating the men below them when they were fucking or being the fat friend, but the difference was THEY were the ones telling the jokes. They had the power, and whether or not it was them working through their trauma out through jokes or them just telling stories, it mattered to me that they were the ones in control,. And I felt the same when I watched Nicoles’ standup.

Throughout her career, she has controlled her narrative, and that continues with this special — most obviously present in both the opening credits and the name of it. The title of the special is a play on the term BBW (Big Beautiful Woman), which is mostly known because it’s one of the most popular porn-based search terms, and despite its friendly-sounding name, it’s often meant to be an insult. (Side Note: I’m not even going to get into the fact that so many of you niggas love watching fat women fuck behind closed doors, but then act like you don’t want us IRL because that is a WHOLE other article.) Her body is a topic that comes up occasionally, specifically her body in the realm of sex. But she’s never trying to convince the audience of her self-love — she’s simply talking about her sex life and the wild shit that happens to her sometimes because she happens to be fat.

So like I said, Nicole Byer has been around and thanks to this special, she’s not going anywhere anytime soon.

Shelli has written 209 articles for us.