In a study published this month in the journal Organizational Behavior and Human Decision Processes, UC Berkeley and UPenn researchers examined the role that gender plays in deceptive negotiations. Surprise, surprise: women get shortchanged more frequently than men. But this isn’t because women are worse at negotiating than men. As it turns out, everyone is just way more comfortable targeting women with blatant lies.

The idea for the study came out of Dr. Laura Kray’s personal experience that over the past 17 years, a striking number of female MBA students had complained to her about being lied to during the negotiation simulations in their business classes. Together with research partners Dr. Jessica Kennedy and Alex Van Zant, Kray set out to examine on a more systematic level whether women are more likely than men to be lied to during negotiations. The study was conducted in three parts:

In short: people view women as easy targets, so negotiators opportunistically lie through their teeth. Oh, the joys of being a woman. 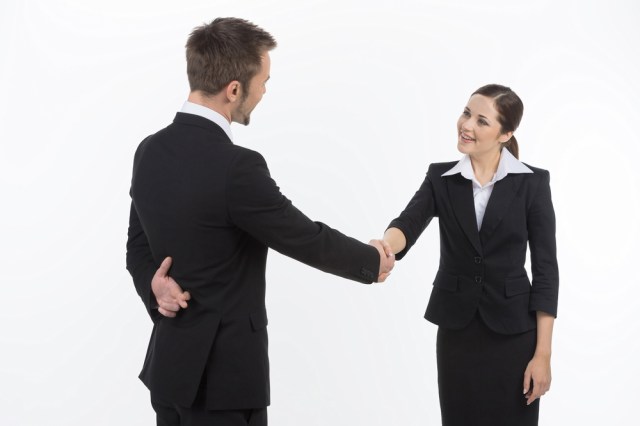 Advice for stock photography businesswomen: always check behind your negotiation partner’s back before agreeing to anything. Via Shutterstock.

To be fair (ha!), this type of deception doesn’t happen in all negotiations — just ones where negotiating partners think they’ll be able to get away with it, or that the consequences won’t be too bad if they’re found out. This is most common in distributive negotiations, where one party’s financial gain in a transaction comes from another’s direct loss. Some common examples include:

And more. The internet can help a lot in these situations, but buyers are still very often sized up and served different prices. From the buyer’s end, it can be next to impossible to figure out which factors are taken into account in those equations. 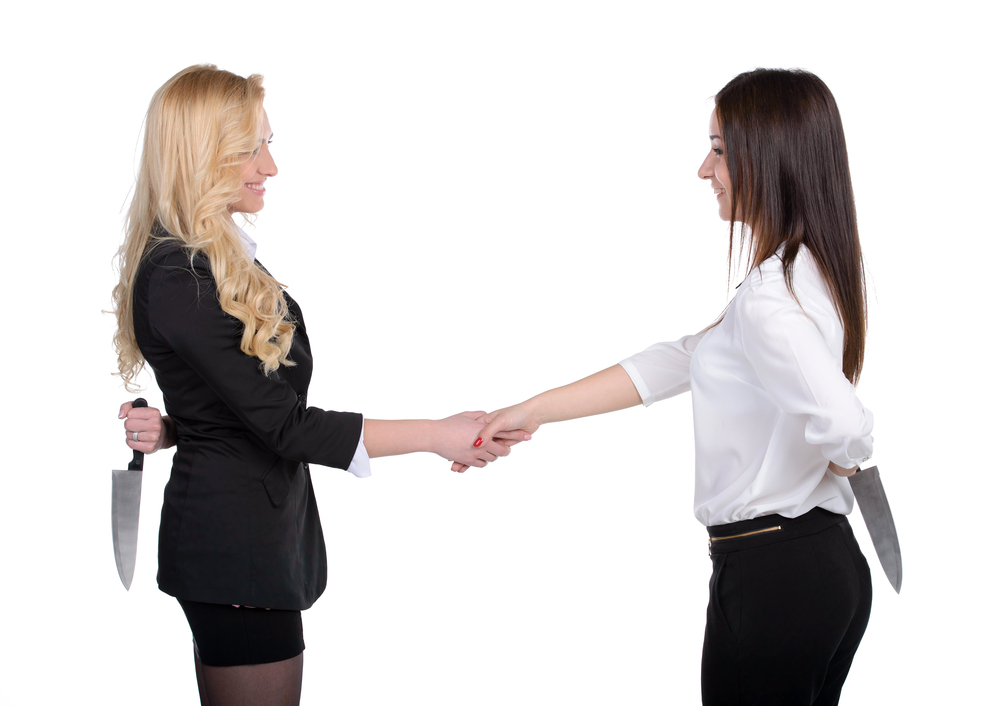 Seriously, look behind their back! Via Shutterstock.

I know some people will be inclined to read this as confirmation of all women as backstabbing bitches (because any excuse for misogyny, right?), but honestly, if I were in that business class, I could easily see myself tempted to behave in the same way. And I hate it, but on an individual level, I think those women kinda sorta did the right thing. Because if they hadn’t? They’d be playing right back into that tired stereotype: that women are terrible at negotiations. That women are too soft-willed to succeed in business. That only men have what it takes. Also: is it really fair to expect women to uphold higher ethical practices than men do?

When the patriarchy joins forces with capitalism, there are no just good choices for women. “Leaning in” isn’t enough to fix the problem. Then again, I’m pretty sure no single thing is.