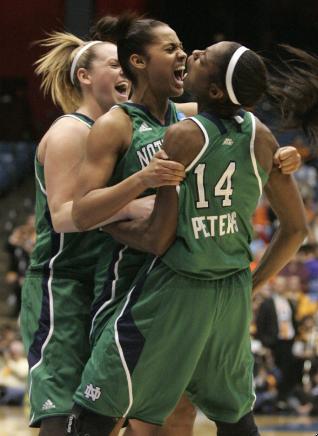 I hope you’re still keeping up with the NCAA Women’s Basketball Tournament! The further teams make it in the tournament, the happier they are, and the more they embrace. Then we get pictures like the one for this story. Everybody wins! Right?

Wrong. Unfortunately, Courtney Vandersloot’s epic dismantling of every team’s defense came to an end when Gonzaga lost to Stanford on Monday. Gonzaga was the only team that wasn’t supposed to be there. An eleven seed in a sea of ones and twos, most of which make it to the Elite 8 fairly often. It may not be much of a consolation prize but my friend thinks Vandersloot is cute and after she scored 18 points in a row I admitted I would be okay with her having my babies. So congrats to her on those accomplishments…and her career or something.

Notre Dame’s upset of Tennessee prevented a Connecticut v. Tennessee match up. A lot of people were looking forward to that game since the rivals no longer play during the regular season. The money I would have paid to see Geno Auriemma’s face when Tennessee lost. Zero dollars to be exact because he will have that same smug face on the majority of their next game anyway.

Connecticut put a shellacking on Duke. The tournament this year has seen some exciting upsets but a one seed beating a two seed by 35 points is a reminder that the women’s game is still lacking parity. But progress is progress is lesbians. I think that’s how that saying goes.

The Final Four is a pretty big deal. It’s like a lesbian gathering for people who knew who Dinah Shore was before Dinah Shore weekend. If you would like to take part in the festivities from your own home or from the home of the hot girl you picked up at a sports bar, the semi-finals are Sunday April 3rd at 7pm ET on ESPN. Past scores, game times, and the bracket are also available.

Did anyone predict this Final Four?
How cute is Skylar Diggins?
Will Connecticut beat Notre Dame for the fourth time this season?