Denice Frohman‘s poems aren’t just beautiful, powerful words — though they certainly are that. They are her history, her politics, her pain, her love and her future. In putting all that into words, Frohman shares tools, ideas and empowerment with all who hear her. Her poem “Dear Straight People” went viral on the internet right when I started dating my first girlfriend. As I navigated being visibly queer for the first time, the poem gave me hope and strength, as did knowing so many other people were hearing it too.

Frohman writes about her family, her students and her communities. With these stories, she digs into the heart of oppressions and reveals clues and asks questions about how to destroy them.

At a young age, Frohman is an award winning poet, lyricist and educator. She won the Women of the World Poetry Slam in 2013, was an invited guest at the White House in 2011, and her activist poetry duo Sister Outsider, in which she teams up with fellow WOWPS champion Dominique Christina, is changing the game for radical and activist poetry. Her debut album Feels Like Home combines her poetry with work of musicians from her home Philadelphia and is available now. She is working on her first book. She answered a few questions for Autostraddle about her work and what poetry and identity mean to her.

What first led you to poetry? How did you get started slamming and writing more seriously

A lot of people are surprised to learn that I didn’t like poetry in high school. Mainly because I wasn’t exposed to poets that looked or sounded like me in school. It gave me the impression that poetry was not an inclusive art form. That, obviously, was a lie. I always loved hip-hop and found a love of language through that, which led me to spoken word. When I discovered spoken word a whole new world opened up for me. I spent years writing and performing without ever slamming. I wanted to develop my voice outside of the competition first. That said I didn’t start slamming until 2010.

What makes poetry an effective medium to explore intersections of identity and oppression?

Because it gives a platform for the personal to be political. To get up on stage and share our experiences, our stories, our ideas, and just pour our hearts out allows connections to be made in real-time. I think it helps us view each other as fully human. In other words, rather than interacting with issues, so to speak, we are interacting with people. As writers and performers, poetry asks us to be as honest as possible. To say the thing that has been boiling inside of us. To give it a home. It’s the way we talk back to the thing that has hurt us. It’s also the way we say we have always been here and that we survive. The very act of speaking becomes revolutionary, particularly when speaking about intersections of identity and oppression, because of the ways in which we’ve been silenced.

Related – why are so many queer women interested in poetry as readers and writers? What is the slam poetry world like for a queer woman today?

I think particularly for queer women, visibility is a sensitive, but important thing for us – both as individuals and as a community. Spoken word is a very visible art form so it makes a lot of sense. Because society assigns folks a heterosexual identity from the very beginning that then requires a “coming out,” (and when I say “coming out,” I mean that as a constant act and not a one time event), I think we want to be heard and seen for who we are and who we are not. The slam poetry world is welcoming to hearing our voices I think for the most part – but as in any other community we are still a microcosm of a greater society so there is still work to be done.

How does poetry function as a tool for activism and justice work, especially in your work with Sister Outsider?

Sister Outsider has quickly become one of the most important parts of my work. This year, Dominique Christina, an award-winning, poet, educator, activist, and two time Women of the World Poetry Slam Champion),and I paired up as a group to go on a national tour. It’s the first time that two WOWPS champions have ever paired up. We’ve visited over 35 college campuses this year – performing, teaching workshops, and engaging in really important conversations around race, gender, sexuality, “otherness,” rape culture, and how language and identity interact. Poetry for us is a tool of survival and resistance. Our work is as diverse as our identities so we’ve been fortunate enough to be able to speak to a lot of different communities. College campuses and schools across the country are dealing with very real issues of social justice, so it’s been great to engage students, administrators and faculty committed to creating environments that are inclusive and safe. We are planning our next tour now and looking to also include international schools.

You write a lot about family. “Accents” and “Abuela’s Dance” are two of my favorite poems on the album. How has your family influenced you as a writer and activist? What do they think of your career

I think a lot of my influences as a writer and activist came from other communities and experiences, but I think that my family’s love of music definitely has had an influence on me and my style. They’re happy that I’m doing what I love and support me the best they can. 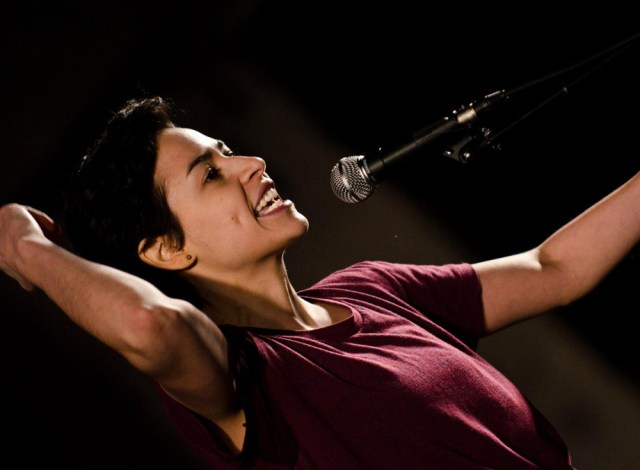 “Dear Straight People” was all over the internet last year after you won WOWPS. What’s the story behind that poem?

That poem was born out of being harassed too many times on the street. I had two particularly bad experiences where I was harassed in front of my house and it just set me off. I tell people that that poem was born out of anger and just something I needed to get out. I was upset that I was being made to feel like public spaces didn’t belong to LGBTQ folks. I didn’t realize it at the time but it opened up a pandoras box of experiences and frustrations with homophobia, straight privilege, and the ways in which LGBTQ folks are harassed for being visible and unapologetic.

Can you tell me a little about your writing process? Where do you draw inspiration? Is there a difference in writing for page and stage for you?

I am constantly learning about my writing process but I’ve learned that I write best if I do less editing during the first phase and more purging. Also, it’s best for me to write as soon as I can when the urge comes on. I don’t always do that but typically that’s where the most organic writing lives. I draw inspiration from experiences that affect me, my communities, my students in a way that attempts to silence us or tell us we are not valuable. A lot of my writing is about naming that and countering that by celebrating our resilience and beauty. I want people to know they matter. I want us to know our history. I want us to not apologize for who we are.

What advice do you want to give to young queer women with an interest in writing and/or performing poetry?

Do it! Focus on being honest and locating your silences. That’s often where the transformational writing lives. Don’t be afraid to be vulnerable. Poetry calls us into ourselves. It’s asking you to be truthful and say whatever it is you need to say. I also encourage folks to read as much as possible, because that’s how you learn what is possible with language. At the same time, it’s important to not copy what others are doing but to draw inspiration from them – the kind that asks you to dig deeper. Watching others is important, but stay true to you and your voice.

What’s next for you? Any new albums, books or other projects on the horizon?

The next big thing for me is to work on my first book of poetry, which has been a long time coming and to plan the next Sister Outsider tour for 2014-2015.

Anything else you think AS readers would want to know about you, poetry, or the universe?

You are beautiful. Know that. Every day.