Ever since I first heard that our very own Intern Grace — along with the group of other super talented comic creators Noelle Stevenson, Shannon Watters and Brooke Allen — were creating a comic together, I have been pacing back and forth waiting for that comic to actually come out. When I finally got my hands on a copy of it last week, I was not let down. Lumberjanes #1 is easily my favorite debut issue of any comic in at least two years. So often I’m worried that a lot of my friends won’t like the comics that I’m into, whether it’s because they’re too full of sci-fi weirdness, you have to know too much about the world, they have too much fighting or they’re too niche. This comic is completely without that problem. 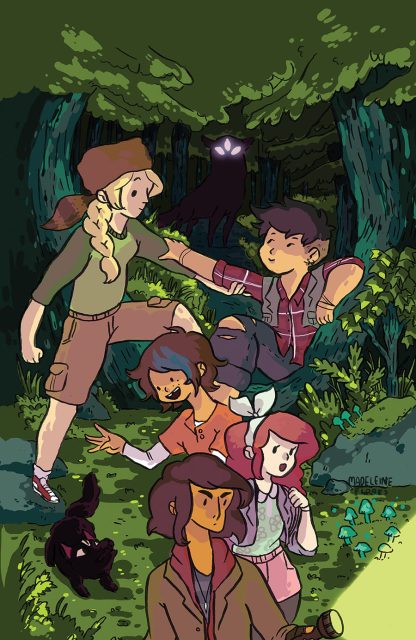 If you like laughing, this is the comic for you.

If you like action, this is the comic for you.

If you like spooky stuff, this is the comic for you.

If you like friendship, this is the comic for you.

If you like camps, this is the comic for you.

If you like girls, this is the comic for you.

If you like comics, this is the comic for you.

Basically, if you like anything, this is the comic for you.

It has hints of Buffy the Vampire Slayer, Adventure Time, Gravity Falls, The Goonies and so much more. It has excitement, laughs and the kind of relationships that everyone hopes for. It also has enthusiasm, like genuine enthusiasm. Sure these girls are beyond cool, sure they make references about everything from punk rock icons to groundbreaking aviators, but they never do it in the ironic, too-cool-for-school way. They seem to be the kind of friends who actually can’t wait to hang out with each other and who can’t wait to have fun. 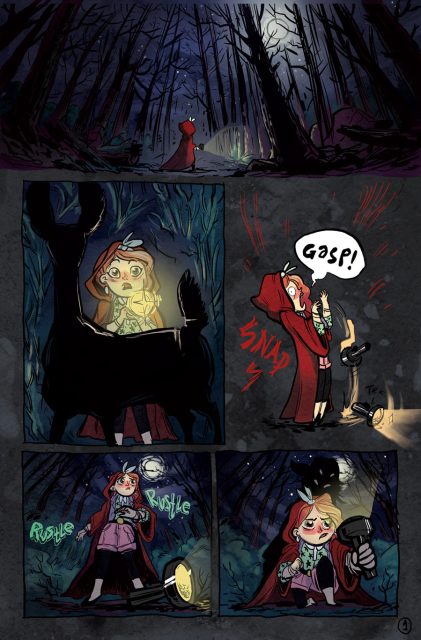 The art is so fun and full of life and adapts so easily to the supernatural elements. It’s able to be dark enough to make the spooky things spooky but also light enough to keep the book feeling fun and full of vigor. I also love love love the character designs. They all look like their own distinct people; they don’t suffer from “same face syndrome,” or even “same body type syndrome” like so many comic book characters do. And the way each character looks tells us so much about her personality. We’ve got Mal with her alternative lifestyle haircut and battle plans; April, a red-headed femme who isn’t afraid to start a fight or write down clues; blonde Molly who wears a Davy Crockett hat and seems to be most afraid of being caught and sent home; Jo, who knows the Lumberjanes pledge by heart and has a more rugged look; and little Ripley, all full of blue hair streaks, excitement and endless energy.

This is exactly the kind of group of friends I wish I had when I was growing up. 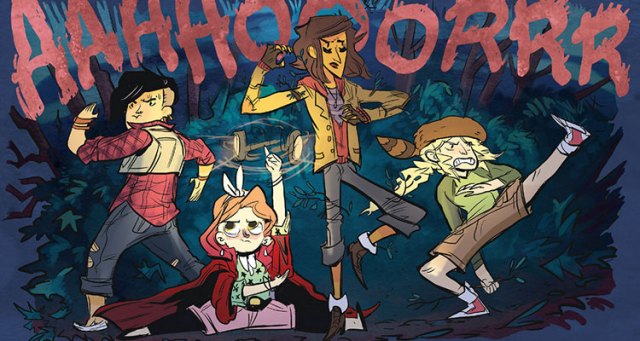 Aside from being a fun, lovely and amazing comic, I feel like it’s also vitally important. There are so many stories about young boys who team up and go on adventures: Stand By Me, Kings of Summer, the previously mentioned Goonies, Super 8, The Sandlot and the list goes on and on. However, for girls, their adventures usually rotate around babysitting, dating and sleepovers. Now, all of those things are great (and some of them are sure to pop up in Lumberjanes), but girls also need to know that they can explore the woods, fight bad guys and save the day. Young girls realizing that their futures are wide open and they can do anything is one of my favorite tropes, and Lumberjanes taps right into it.

If you have a younger girl in your life (or younger nonbinary person or even a younger boy) you’ve got to show them this comic. If I had gotten a hold of this when I was twelve, I wouldn’t have cared about anything else. I’m pretty sure the creators tapped into the daydreams of fifth graders across the country to make this comic. But they also made it with other people in mind. While this is the perfect comic for your little sister, it’s also the perfect comic for you. It doesn’t try to appeal to the lowest common denominator, it doesn’t water things down and it doesn’t hold any punches. 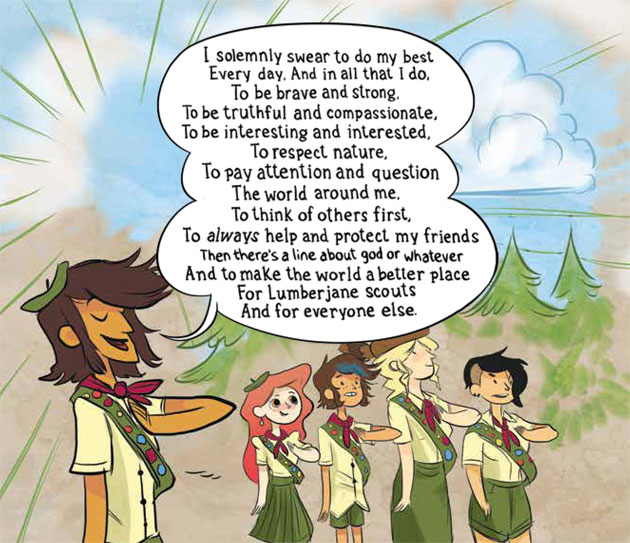 I absolutely cannot wait until the next issue. I’m already way invested in these girls, their relationships with each other and the adventures they’re going to have. Due to all the action that’s packed into the first issue, we don’t get to know each of the girls that well, but that’s perfectly okay. This is a first issue, and if it does one thing right, it gets you absolutely hooked. You can get copies of Lumberjanes #1 at your local comic shop (if they’re sold out, you can always ask them to order more) or online from BOOM! Studios.

There’s even a frickin’ mixtape playlist in the back! I mean, come on, what more could you want?