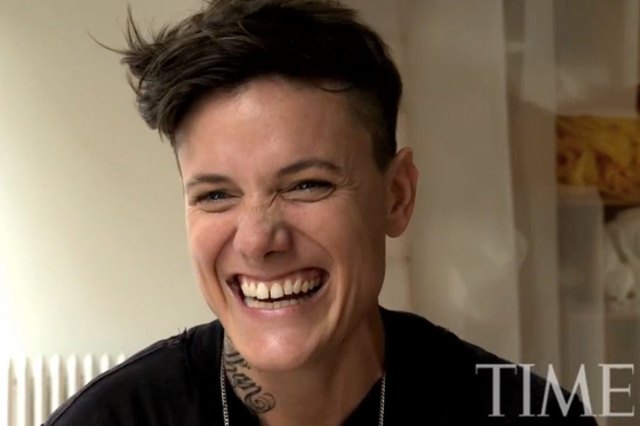 Have you ever wanted to fuck someone and look like them at the same time? That’s how I feel about Casey Legler, a person who identifies as female but who works as a model in the men’s fashion world.

Legler just fell into this role of modeling. An art maker working in New York, she did not anticipate doing this job at all. Having nothing to do on a particular Friday afternoon, she followed her photographer friend down a rabbit hole and into a world where she was not the art maker, but the subject instead. Ford models saw the results of this shoot for Muse magazine and signed her almost immediately to work on the male roster. Only the male roster.

“I understand signifiers. We’re social creatures and we have a physical language of communicating with each other,” she says. “But it would be a really beautiful thing if we could all just wear what we wanted, without it meaning something.”

And, you guys, she’s a former Olympic swimmer and doesn’t give a fuck about what society tells her she can and can’t experience:

When she qualified for the Olympic Games in Atlanta at age 18, Legler got together with some of her male teammates and shaved her head, eager to experience the feeling they described of swimming with a bald head.

“That was the beginning,” Legler says. “It was always one of those things: ‘These people get to do it, I really want to do it — why can’t I?’”

We’ve all seen Andrej Pejic’s career explode and I’ve always been in his corner. That’s nice, I thought. I love fucking with gender. Go Pejic! And go fashion world for not just allowing but encouraging this transgression of traditional gender ideals. I underestimated the importance of having a Pejic counterpart. The importance of it to me. The minute I started watching this video, I had an emotional experience I never had watching Pejic’s interviews or work. Casey Legler looks like me.

I mean, she’s taller than I am, clocking in at 6’2″. So I definitely don’t mean literally. But she’s a masculine of center woman. And she is comfortable in her body, comfortable enough to walk a runway and be in front of a camera constantly. I felt a lot feelings when I heard her voice, because it’s not deep. Mine isn’t either. I am so constantly self-concious of the way that I sound (like Minnie Mouse and a valley girl had a baby) and the vocal mannerisms I employ when I am talking (entirely my mother’s.) I feel like I should sound–I don’t know– butcher. Somehow. Legler is a fucking male model and her voice, while not quite the Minnie Mouse timbre of mine, is higher on the register. And she rocks it.

Having been weakened to kitten state, by the time I saw the image of her in a dress flash by in that video, I cried a little. You guys– I have paper cut-out butterflies on my walls and a crocheted afghan in my room. I put flowers on everything. No one owns more pink than I do. And yet nothing makes me happier than shopping in the men’s section. DO YOU KNOW HOW MUCH CRAP I GET? And here’s this male model, talking about how she’s been instructed by the finest queens in rocking a pair of heels and how she looks fierce in a dress. Talking about how it would be so nice if we lived in a world where everyone could look how they wanted, wear what they wanted, and it wouldn’t really mean anything? 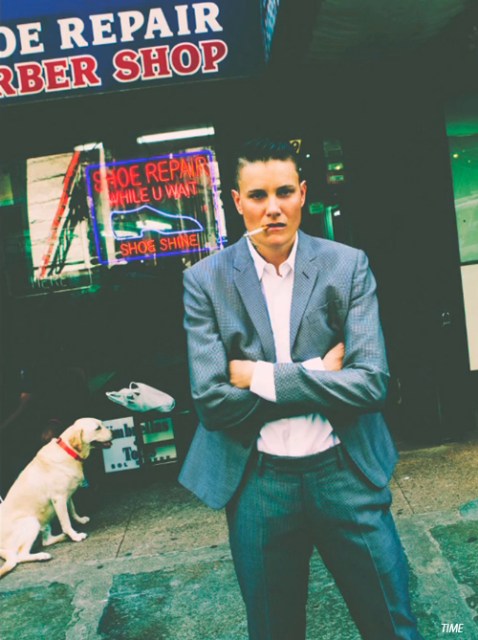 I want that world.

I want to live in a space where I can put something on my body and people aren’t going to give me crap about it. I want a world where, yes, I am deliberate about the way that I look but that can change from day to day. Where gender presentation can be fluid. Where women can be male models. Where Casey Legler’s haircut just grows naturally on my head. Okay, that last one is a physical impossibility. But I think it is so amazing that Legler is helping to create that world just by strutting her stuff. By showing us that it’s okay to be comfortable in your appearance. By showing us we can play in any sandbox we want to.

Watch the video. And rock it out in your own skin, your own clothes, your own body today, because it is a brave new world of fashion. Also, you guys, she’s really sexy. I got through the whole article without saying that, but I can’t hold it in any more. Let’s keep our eye on this one (it shouldn’t be hard.)