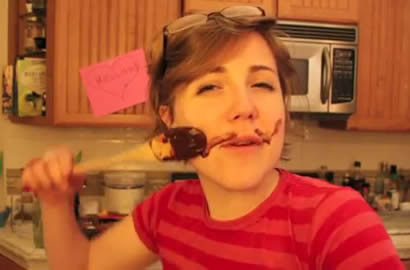 Hello! Hannah Hart has a special holiday gift for you: she made chocolate soufflé! And by that I mean she melted chocolate and smeared it all over her face, which is just as good if not better. She also gives a fair amount of relationship advice, including the classic Hartoism: “Relationships are a lot like cooking, you know? You have a lot of bad experiences, and you have a lot of times you fucked up, but for some reason, you started a webseries about cooking. I don’t get you, man.” Happy Three-Days-After Valentine’s Day, I guess!

Have I mentioned that she’s coming to Camp Autostraddle? I’m not sure I’ve geeked out enough about this yet.