Submerge gives us a peek into the life of Jordan (Lily Hall), a university student/swimmer living in Melbourne, Australia living with her best friend, Lucas (Kevin Dee). Oh, and she’s a lesbian. Jordan’s sexual orientation isn’t the focus of the film, though her sexuality very much is. This film gives us a dark look into the fetish world, showing us Jordan’s curiosity and eventually self-destructive obsession with bondage, kink and anonymous sex. This contrasts with her university studies and her turbulent and short-lived stint as a research assistant to a history professor. Why short lived? Well, did I mention the history professor has a hot girlfriend who is also Jordan’s tutor?

From the very beginning, we know Jordan and Angie (Christina Hallett), the tutor, are attracted to each other, and I definitely enjoyed the innocent, then uncomfortable seduction between them. This isn’t a coming out story. This is a story about queer characters who are wrong for one another. 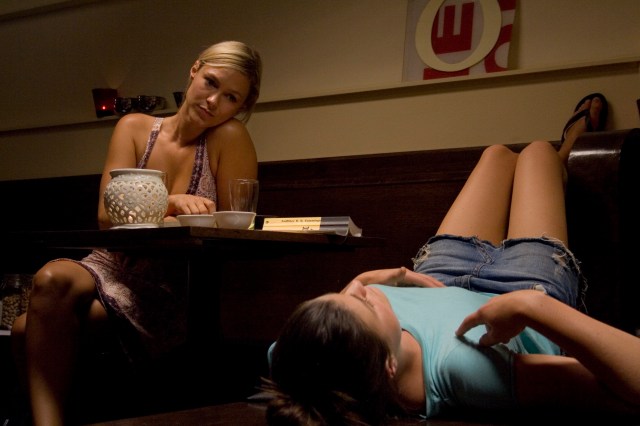 Angie (Christina Hallett) and Jordan (Lily Hall) study together in a cafe.

Jordan and Angie have an affair behind her history professor’s back. As you might guess, Jordan and Angie’s affair isn’t all sunshine and rainbows and begins to affect Jordan’s very strict training schedule. This makes Jordan’s really overbearing mother angry and threaten to pull her out of university. It was a very interesting flip to what you’d think you should prioritize (studies over sports? One will probably be easier to make a lifelong career out of?) and I appreciated the subversion of expectations through this power dynamic, believable or not. At times, Jordan is angry with Angie’s lack of connection, and ends up with another woman, Delilah (Georgia Bolton). Delilah is Angie and Lucas’ introduction to the fetish scene. Delilah might have been a sex worker? I wasn’t quite clear on this. As Jordan’s mother gets more overbearing, Jordan experiments more destructively in the fetish scene. Thus begins her downward spiral.

Jordan is an undeniably interesting character. She’s so driven but so lost, and focusing the narrative on her downward spiral makes for good storytelling. However, I have basically no idea what her intentions are at all times. At one point, she takes drugs, misses an important practice, then for no conceivable reason, sleeps with Lucas, her roommate. 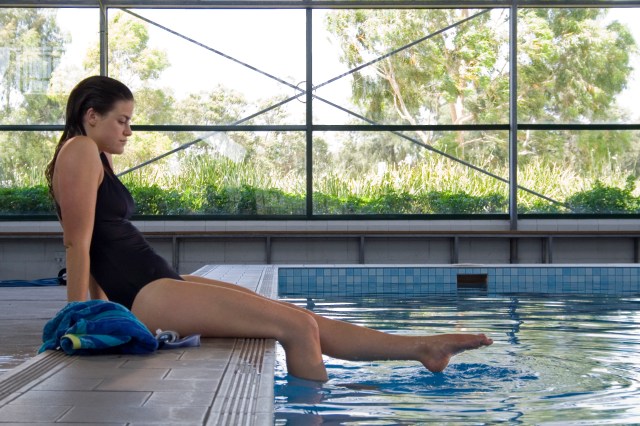 Jordan (Lily Hall) contemplates her life as a swimmer.

To be honest, my girlfriend and I watched this movie together and had a lot of frustrated moments. As a former college athlete, my girlfriend was pissed that Jordan was taking drugs the night before a big trial. Regardless of Jordan’s intentions of sticking with swimming, it seemed so wildly unbelievable that we couldn’t process the character’s intentions. I didn’t take Jordan very seriously as an athlete; she had a shoulder injury that was left open-ended and confusing, and I wonder if her character would have been better served as someone who only had pressure from the university side of her life.

That said, there were times when you connected with Jordan so well through the very subtle storytelling of the film. I particularly enjoyed the portrayal of the fetish scene in this film because it wasn’t sensationalized. There’s a really beautiful bondage scene with red rope that blew me away with its clever and subtle beauty. On the flip side, there’s a scene or two of anonymous sex that doesn’t seem to make sense nor have a purpose. 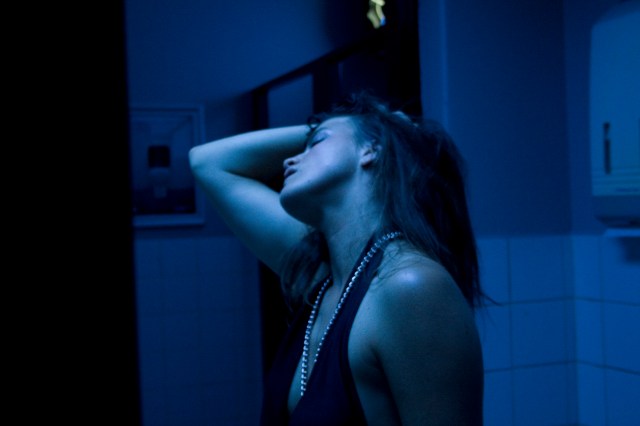 Jordan in da club or at least da club’s bathroom.

The cinematography, the vivid and picturesque setting of Melbourne and the directness of sexuality and sexual orientation kept me watching this film. I also loved the soundtrack. O’Connor and Holmes chose only independent Australian artists and it adds a certain raw ambiance to the film as a whole. I’d recommend watching this with close friends or a partner, but be prepared for strong reactions across the board.

You can rent or buy Submerge on iTunes here.