Welcome to the sixteenth installment of More Than Words, where I take queer words of all sorts and smash them apart and see what makes them tick. Every week I’ll be dissecting a different word, trying to figure out where it came from, how it has evolved, where it might be going, and what it all means. It’s like reading the dictionary through a prism. Feel free to send word suggestions to cara@autostraddle.com.

I know what time it was. My Facebook/Twitter/Instagram have all been feeding me delicious rainbow morsels for weeks (you all looked great, by the way). Now that the glittery dust has settled city to city, and we’ve all gone back to being prideful in more personal ways, I figured it might be a good time to examine what the word means to history — when it started puffing its chest out, how it earned its capital P, where the lions come in.

When I say “pride” means a whole pack of things, I’m not even talking about self-definition or You Doing You or anything else subjective — its actual dictionary definition encompasses nouns and verbs and deadly sins, and its history reflects that. “Proud,” pride’s predecessor (say that 10 times fast! I’ll wait) stems, way back, from the Latin prodesse (“to be useful”), a construction built from pro (“for” or “before”) and esse (“to be”). From there we get to Late Latin’s prode (“profitable”), which became Old French’s prud (“brave; valiant”). The British took prud and added a sense of arrogance to go with the good stuff — possibly because that’s how the Norman knights who called themselves prud appeared to the British — and thus the original modern English sense of “proud” was born. The jump from “proud” to “pride” involved a few intermediaries, including the late Old English pryde and the Kentish prede. “Pride” was first spelled and pronounced the contemporary way in Mercian, an Anglo-Saxon subdialect currently most famous for “inspiring” J.R.R. Tolkien (who borrowed a lot of it wholesale when designing the language for the Kingdom of Rohan). 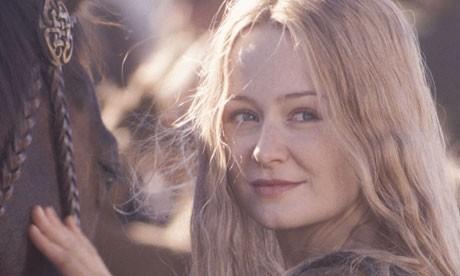 This is normally the part of the column where I turn to the Oxford English Dictionary and let it lead me on a madcap adventure through space and time, during which I somehow trace out a historical trajectory for whatever word. But, most likely as punishment for my hubris, “pride” is seriously all over the place  – I can’t find a rhyme or reason for its distribution. I did, however, pick up on some foreshadowing going on in the OED’s helpful examples. An chronological sampling is below.

“Beholdynge Mars how wonderly he stode, on a whele top with a lady of pryde Haunced aboute.” – Stephen Hawes, The Pasttime of Pleasure, 1509. 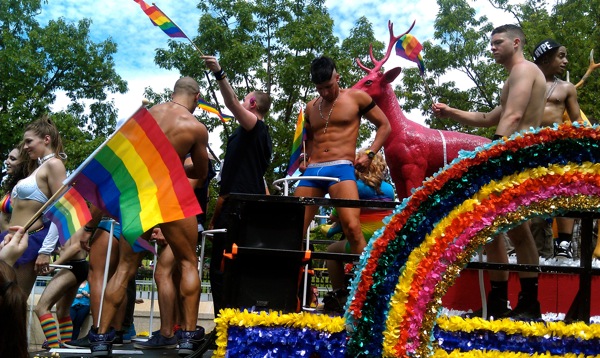 “PRIDE” ALSO MEANS “THE SPLEEN OF A DEER” [NOT KIDDING). FOUR FOR YOU GUYS {VIA BETWEEN V LINES] 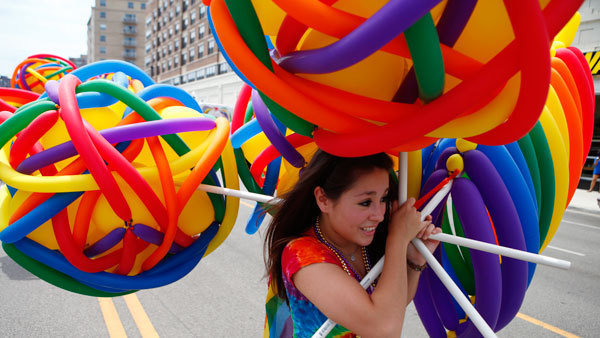 HELP!! MY BRAIN IS A BRAINBOW! [VIA CHICAGO TRIBUNE] 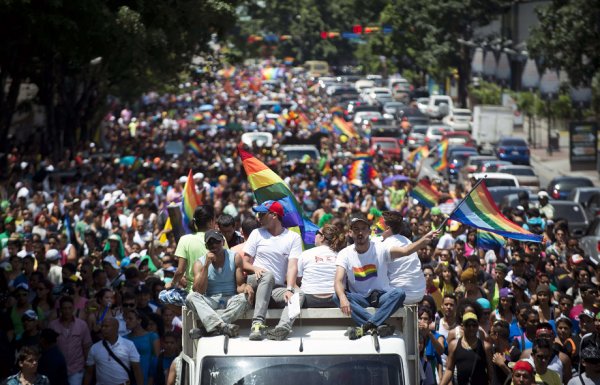 I KNEW YOU WERE TRUBLE. [VIA LEO RAMIREZ/AFP]

“Pride goeth forth on horseback grand and gay…” – Henry Wadsworth Longfellow, Tales of a Wayside Inn, 1870 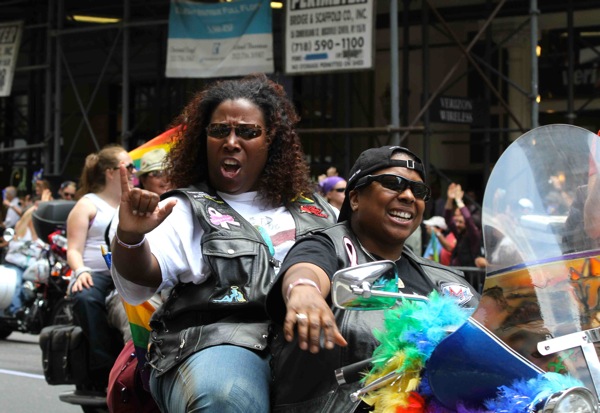 *ON BIKEBACK [VIA LORI E. SEID]

No one picked up on this foreshadowing until around 1970, though. When it first started, the mainstream gay rights movement was more whispery than overtly prideful. “Before Stonewall, gay leaders had primarily promoted silent vigils and polite pickets,” remembers policeman and activist Fred Sargeant. “Since 1965, a small, polite group of gays and lesbians had been picketing outside Liberty Hall [in Philadelphia]. The walk would occur in silence. Required dress on men was jackets and ties; for women, only dresses. We were supposed to be unthreatening.”After Stonewall broke the skin, gay and lesbian groups from major cities, including the Gay Liberation Front, the Lavender Menace, and various university organizations, began to organize a bigger, louder demonstration. This became the Christopher Street Liberation Day Parade, with “no dress or age regulations” and, after much discussion, an official chant: “Say it clear, say it loud, gay is good, gay is proud.” This march, which happened on June 28th, 1970 — a year after the Stonewall riots — is now considered the first LGBT pride parade.

Most of the world didn’t start calling it that until later, though. At the time, the marches and associated events, which started popping up most major cities, were known as “Gay Liberation Marches” or “Gay Freedom Marches” (this History Project timeline, of Boston-area youth group events from the past few decades, proves just how rarely “pride” made the copywriting cut). Although the notion of identity-based pride had been slowly gaining momentum throughout the sixties thanks to the Black Pride movement, three activists worked particularly hard to bring the idea to the gay community. Robert A. Martin (aka Stephen Donaldson, aka Donny the Punk) was a founder of Columbia University’s Student Homophile League in 1968. He recognized the need for an antidote to gay shame and found the answer in the Columbia Athletic Department, who used to brag about their team, the Lions, by yelling “Pride of Lions” at all the football games. Voila! Gay pride. 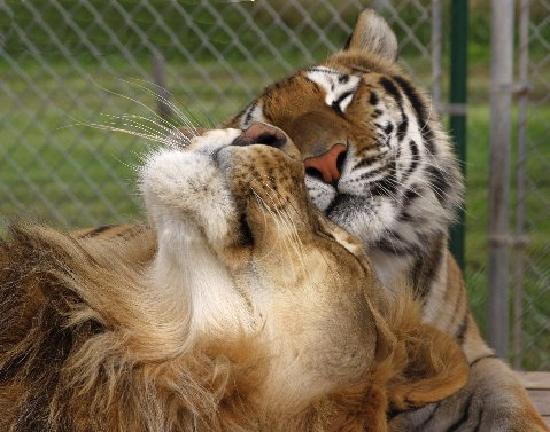 NO ONE CAN TELL THEM WHO TO LOVE [VIA TRIPADVISOR]

Another activist, L. Craig Schoonmaker, claims he used the term directly after the Stonewall Riots. Carmen recently wrote about Brenda Howard, known as the “Mother of Pride” because she played such a vital role in organizing the Christopher Street Liberation Day Parade and making the party last a whole week; she is also credited with popularizing the word “pride,” after deciding all the harping on Christopher Street was too geographically limiting. Eventually, the powers that be decided that the rhetoric about “freedom” and “liberation” was also limiting in a PR sense. Throughout the 1980s and 90s, as the gay community fought the AIDS crisis, “gay pride found itself taken over by new, more organized and decidedly more moderate groups… [this] opened the door for a more corporate sponsorships, media coverage and commercial allure.” Parades, groups, and events slowly started identifying as Pride (San Francisco was a late holdout—they didn’t make the switch until 1995).

By now, of course, Pride has been canonized, capitalized, and endorsed by the White House. It’s a common and unspecialized word, it’s only one syllable, and it doesn’t seem like a likely candidate for controversy. And yet “pride” is — like so many words in our movement — in the middle of a fraught and double-edged process of reclamation. Some people aren’t proud that that “the first rebellious pride” has evolved into “a multi-million dollar international party;” meanwhile, way at the other side of the rainbow, others are embarrassed by the nudity. “Pride” is dialed up from shame, for sure, but is it dialed down from liberation? Maybe it’s time to dive back into those many definitions and remember the various emotional cornerstones the word was built on, back when it was still a (not-so-)humble lowercase. Maybe, for once, we should try to nail down what it means to all of us together.