Hey! It’s Christmas! Merry Christmas, Autostraddlers. In honor of the holiday, I propose we all partake in a tradition. Grab your ‘nog and gather around, and I’ll read to you all about Mary – blessed virgin, religious icon, and (did you know?) beleaguered hostess:

Always warms me right up. Since it’s the season for giving, here’s a translation:

Long ago, a woman gave birth in the wintertime. She had a baby boy, and she named him “Jesus.” The baby pleased her, and she said to her spouse, “If this baby doesn’t do well, I’ll be very surprised!” And then—suddenly—there arrived many shepherds, many angels, and several wise men. They said, “May we please see the baby?” “What a horrible time for a baby-viewing!” the woman said to herself. “They have no common sense and no manners!” — and she was disgusted. But aloud she said, “Please, come and see.”

A fairly familiar story, right? But an unfamiliar viewpoint, told in an unfamiliar language. A viewpoint enabled by, and possibly only reachable through, that language. Tongue-tied readers, meet Láadan, the constructed language designed to let us express ourselves so perfectly that we blow up the patriarchy. “More than words” is right.

Constructed languages, or conlangs, are languages invented by people or groups (as opposed to natural languages, which arise organically over long periods of time). People make conlangs for all different reasons. Authors dream them up to flesh out imaginary worlds (think Elvish, or Klingon) or to rhetorically constrict them – think Orwell’s Newspeak (doublethink it, even). Politically-minded idealists use them to try to solve global communication problems (Esperanto!); philosophically-minded idealists use them to try to solve personal communication problems, or to smooth the sometimes harrowing journey from brain to mouth (see Josh Foer’s recent knockout essay on Ithkuil, a conlang that was invented for one purpose and co-opted for another). Linguists of all levels build them to test theories. Some people do it in order to send more creative Christmas cards. 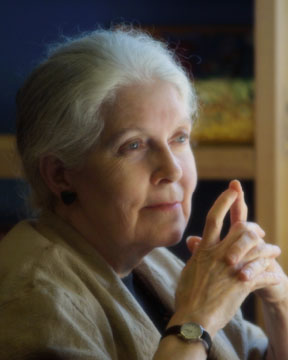 Láadan springs from all these impulses and aims high. It’s the runaway brainchild of Suzette Haden Elgin, a poet/novelist/songwriter/all-around wordsmith who started writing science fiction to pay for her linguistics Ph.D. and never stopped. In 1981, while reading about gendered language and mathematical philosophy, Elgin had a brainblast:

If this idea wasn’t irresistible enough, there was the attendant theory (popularly known as “linguistic relativity” or “the Sapir-Whorf hypothesis“) that our conceptions and cognitive processes – our very worldviews and brains! – are shaped by the structure of the language we use (linguists have since corralled their sweeping enthusiasm about this, but it was very much in vogue at the time). Perhaps a constructed language, then, could help steer a culture. Plus, Elgin had already been speaking in public about the limitations of English for years, and she was often asked why, if there was such a big problem with the language, women hadn’t just made a new one, already. It was a good question. The gauntlet was thrown.

Elgin picked it up and wrote the Native Tongue trilogy (which – full disclosure – I have not yet read). The books are set in a future where Earth’s power depends on Earthlings’ ability to facilitate communication between alien races, and so linguists are high-class, powerful, and very talented. Meanwhile, in America, Congress has voted to retract women’s civil rights – the nineteenth amendment has been repealed, women can’t hold office or have intellectual lives and are considered dangerous when “not constrained by the careful and constant supervision of a responsible male citizen.” A small group of women begins building a revolution by slowly, word by word, creating a language, one that can “bring to life concepts men have never needed, have never dreamed of, and thus change the world.” Elgin decided that she wouldn’t be able to write a convincing and accurate book about the process of language construction unless she constructed one herself. On June 28th, 1982, she started constructing Láadan by hand, with the goal of creating a basic grammatical and syntactic structure and coming up with 1,000 words. By the fall, she’d far surpassed that goal, and had published that Christmas tale we read part of earlier, in Women and Language News. By 1984, the first Native Tongue book was out. 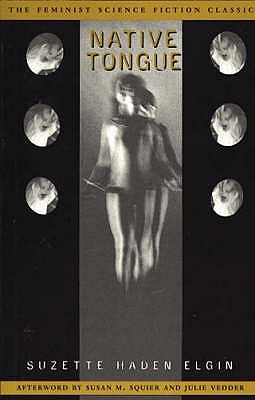 So what, according to a feminist linguist, does a feminist language look like? Elgin had two goals for this one, based on lacks she’d observed in English and its close relatives:

“(1) Those languages lacked vocabulary for many things that are extremely important to women, making it cumbersome and inconvenient to talk about them. (2) They lacked ways to express emotional information conveniently, so that — especially in English — much of that information had to be carried by body language and was almost entirely missing from written language. This characteristic (which makes English so well suited for business) left women vulnerable to hostile language followed by the ancient “But all I said was….” excuse; and it restricted women to the largely useless “It wasn’t what you said, it was the way you said it!” defense against such hostility. In constructing Láadan, I focused on giving it features intended to repair those two deficiencies.”

Construction-wise, Láadan is a polysynthetic, or agglutinating, language – distinct, pronounceable syllables each correspond to a small chunk of meaning, and are then strung together to form words. This is a wise choice when conlanging, because then you only have to come up with the small chunks and rules about how they fit together, and compound words take care of themselves. It’s also a good way to make room for detail, clarity, and subtlety – you can build in the gradations that a natural language grows, via careful syllable-stacking. For example, in the Mary story above, the word “wothidá” is simply taken as “wise man,” but, as Láadan scholar Amberwind Barnhart points out, dimensions are lost in translation: “In this word, Dr. Elgin has gone a different direction: she starts with “woth” (wisdom), then adds the masculine ending “–id” to give “wothid” (male wisdom; wisdom as perceived by men) and only then does she add the agentive suffix “–á” to give “wothidá” (doer of male wisdom)—a very different slant from the common English notion of “wise man.”” 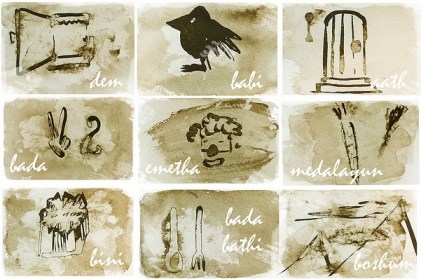 Plus, the building blocks themselves are precise, well-defined, and nuanced (a lot of them are also cleverly designed – for example, “ab” means “love for one liked but not respected,” while its almost-mirror, “ad,” means “love for one respected but not liked”). Just reading through the Láadan-English dictionary makes me feel slightly more in touch with my emotions. Scroll to the B’s and you’ll find five different words for anger, differentiated not by intensity, as in English, but by whether or not it’s justified, targeted, and effective. Go down to L and there are two senses of “belonging,” one rewarding and one oppressive.

Elgin also built in rules meant to clarify intention and degree of credibility. Each Láadan sentence begins with a “Speech Act” word – “I tell you;” “I promise you;” “I warn you;” etc. – which lets the listener know what kind of communication is going on. Every sentence also ends with an evidential, which tells you why the speaker feels justified in claiming that she’s telling the truth (“I saw it with my own eyes;” “I heard it from a credible source;” “It’s self-evident”), almost like a verbal citation. This helps reduce ambiguity as well, and requires speakers to take more responsibility for what they’re saying (although some argue that the larger context of a sentence can undo this). 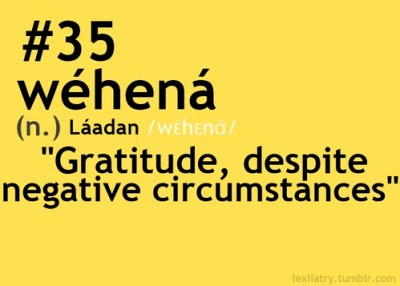 Inventing Láadan not only gave Elgin more street cred – by actually creating the language, she was able to use it in her book and run a simultaneous experiment in the real world. Elgin hypothesized that if women were offered a language that better fit them, “one of two things would happen — they would welcome and nurture it, or it would at minimum motivate them to replace it with a better women’s language of their own construction.” Now, thirty years after she gave us one, it’s pretty clear that it wasn’t embraced or used as a jumping off point. Elgin considers her experiment a failure, at least within the ten-year time frame she originally gave it to succeed. A small community has grown up around the language, largely online, and fans still create and define words (the largest online Láadan-English dictionary denotes which words are Elgin’s and which are fan-created, and looking at the fan-created ones is like getting a peek at someone’s soul – what does this person most want to be able to express?). Conlangers debate its social and linguistic pros and cons. But no one’s shouting it in the streets. I’ve never gotten to use the word radíidin (“a non-holiday, a time allegedly a holiday but actually so much a burden because of work and preparations that it is a dreaded occasion; especially when there are too many guests and none of them help.”), even though sometimes it’s the only word.

Láadan is certainly a product of its time, its creator, the plot it was created for, and the small community that latched onto it and continues to build it up. Parts of it are ridiculously problematic (starting with the proposition that anyone can presume to know what “women” want to talk about). A similar language proposed today would likely have entirely different goals, not to mention different methods of achieving them. But even if it’s outdated, I’m glad we’ve got Láadan. I’m glad that someone saw the holes in the way she was able to view the world and bothered to try to patch them. I’m downright wéhená about it.