But now that I have played Monster Hunter World for a medium amount of time, I feel confident in telling you that, whatever else it might be, this is a game that introduces the most important feature of our generation: Adventuring with your cat. Would you prefer to adventure with a dog? Well, you cannot. And now you know how I’ve felt every time I have played a game that only offered dog companionship.

The most important thing about games that let you have a cat companion (meaning, just this game) is the Cat Companion Character Creator. Now, I hate to look a gift cat in the mouth, but I was a little disappointed by the limitations of this Cat Creator. As you should all know by now, my cat is white with tabby markings and she is the best cat that has ever lived. The Cat Creator lets you do a solid color, two color, tabby all over, or white with calico spots. These are all excellent cat styles, don’t get me wrong, but how could it leave out tabby and white? But you know what? Baby steps. It’s unfair to expect one video game to represent all cats. 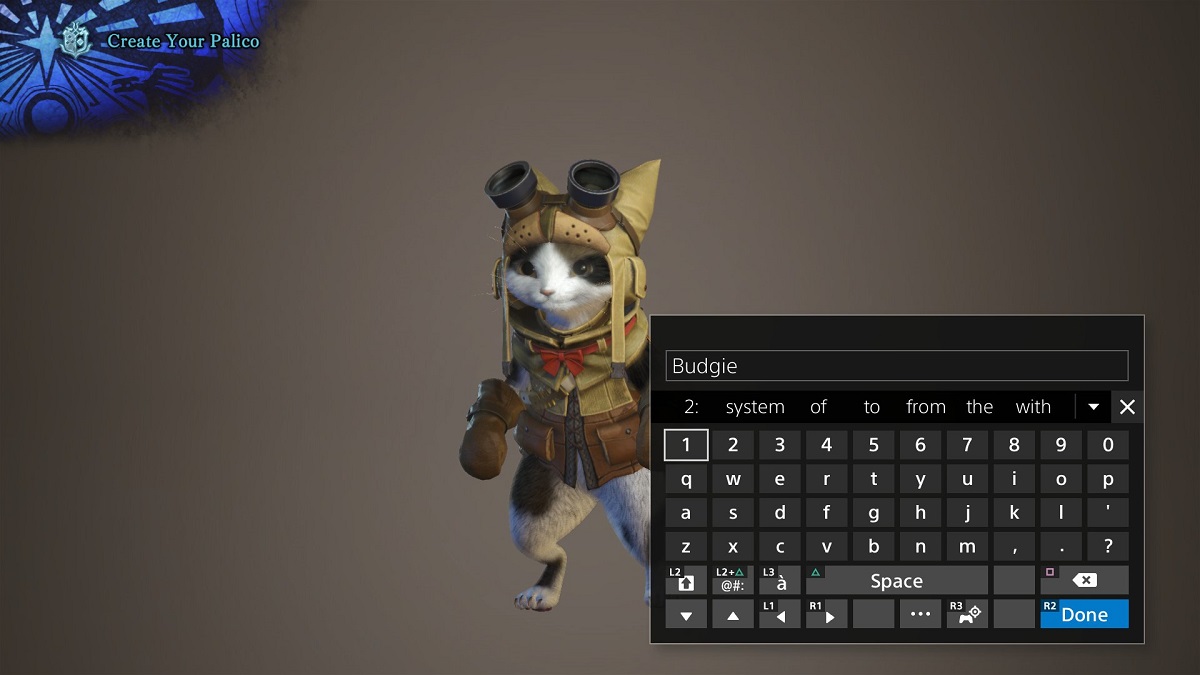 Anyway. I made a sort of impressionist Budgie by giving her brown and black calico spots. I first tried to use the tabby pattern and just choose white for the belly, but that resulted in there being white stripes on her tail and Budgie does not have white stripes on her tail. The calico works. Oh, by the way, the cats in this game are called Palicos. Palicos! It’s too much! What is this game even about and does it really matter?

Well, according to the opening cut scenes, the plot does not in fact really matter, because it is nonsense. Apparently a bunch of people and their cats, myself and Budgie included, are sailing to an island full of “monsters” to help kill all of the “monsters” on the island. Instead of just, like, not going to Monster Island in the first place. (The monsters are just dinosaurs? They’re really not monstrous at all. I don’t really want to hunt them.) Then the ship gets destroyed by a dragon, which probably serves us right, and it is also right about this time that I realize I put so much attention into designing my Palico that I forgot to give my actual human character a chin and there’s no way to fix that now. But, dang, if Budgie doesn’t look cute as a button in her tiny cat armor. 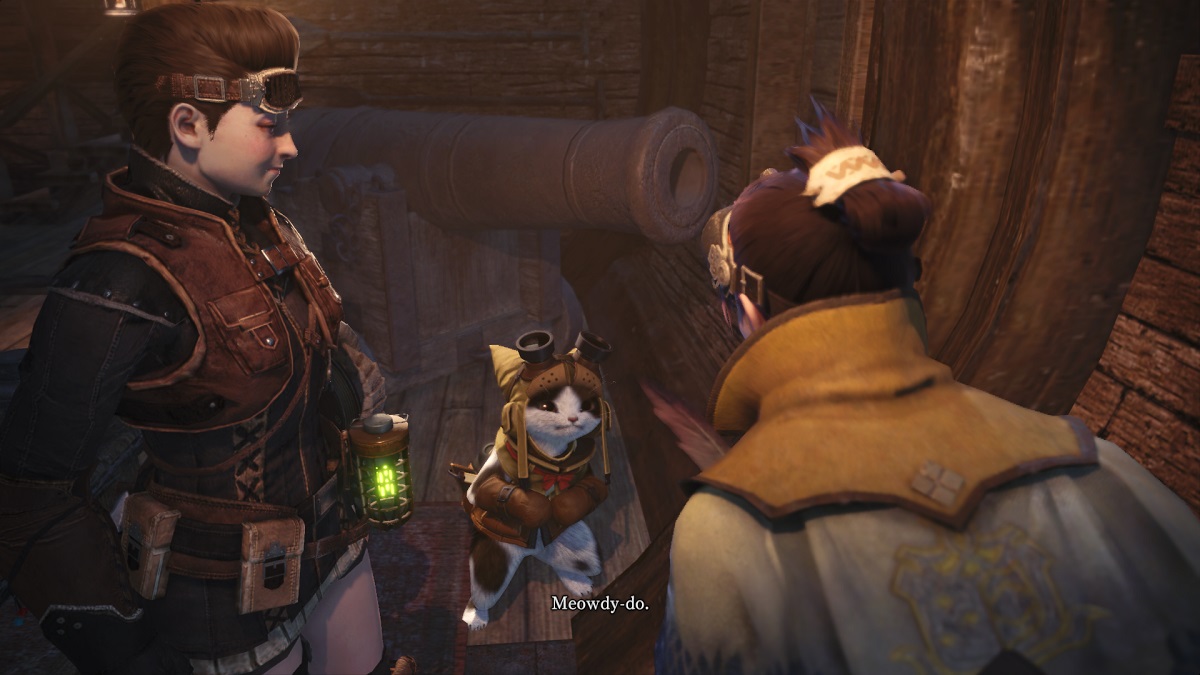 So the shipwreck isn’t that big a deal. Everybody else somehow made it safely to town, which is a big a beautiful place that has seemingly been here for a very long time. I guess they put all of their energy toward building this place, because that is the only explanation for the fact that they have seemingly done none of the work of eradicating all life on this island that they set out to do.

So it is now up to Budgie and I do to every menial task necessary to keep this war machine running. (Except the cooking. That is handled by a team of very talented cat chefs.) Gather mushrooms. Mine ore. Check bone piles. Scout footprints. Catch bugs. But mostly, kill everything that moves, and scavenge whatever pieces of their bodies that can you can, so you can bring those back to base and use them to make weapons and armor for yourself, and most importantly, cuter outfits for your Palico. 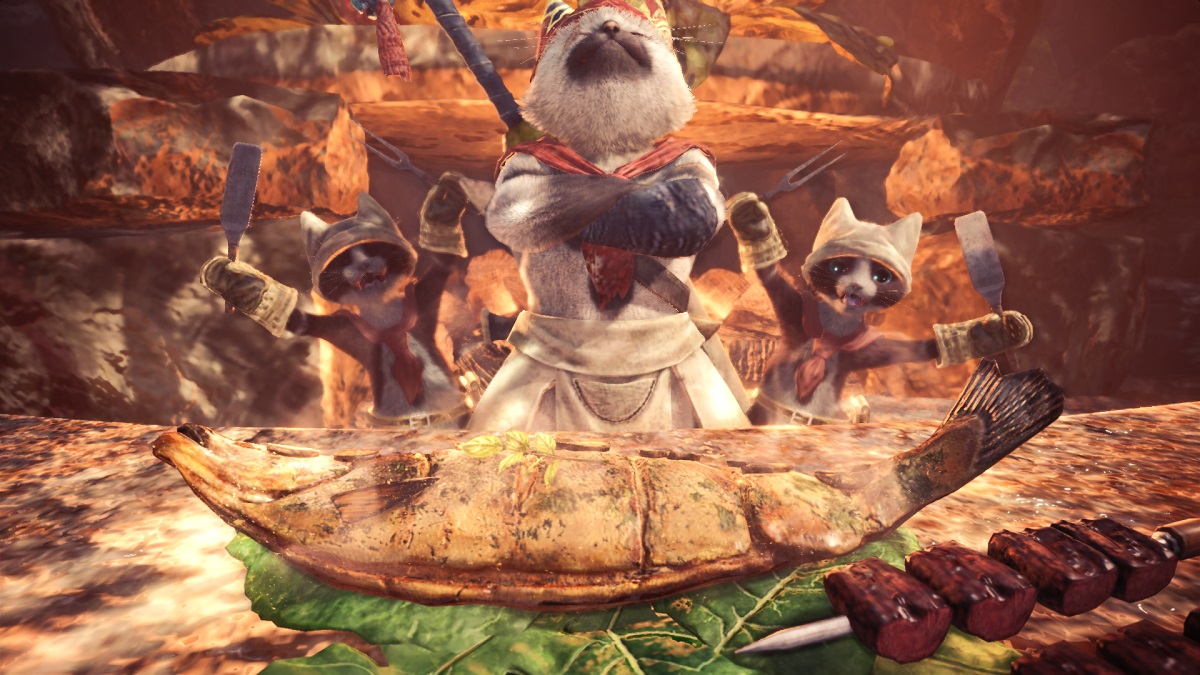 So, really, that’s the loop right there. You go on missions to hunt dinosaurs, then you kill them and use their bones and scales and feathers to make better weapons to kill more dinosaurs. It’s the simplest concept, and yet it is made unfathomably complicated by the insane number of weapons they give you (something like a dozen just to start with), the controls (just never quite where they feel like they should be) and the menu navigation (impossible.)

It is a lot of fun. It can rope you in with “just one more mission” and steal hours from you. Fighting big things is exciting and satisfying, and there is a particular thrill when you get a big beast hurt enough that it runs away and you have to track it to finish it off. But it reminds me too much of things that are a lot better than it for me to really love it? 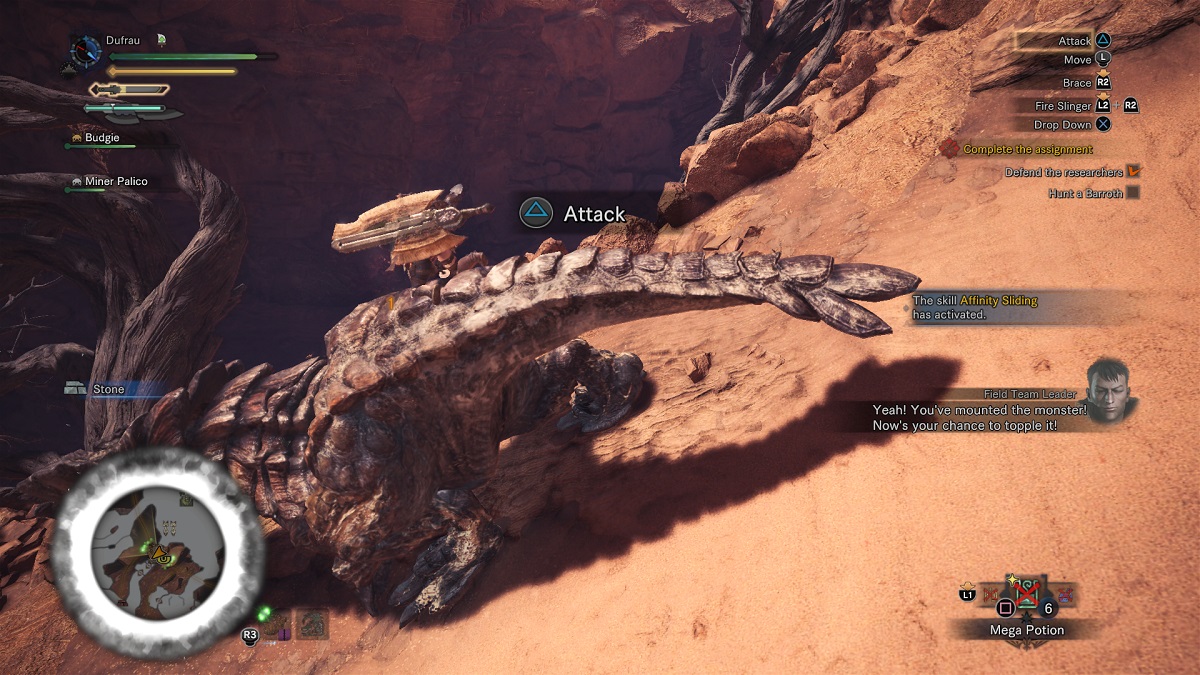 I somehow got on top of this thing but I do not know how.

Right off the bat, with the silent protagonist in a largely voice acted world, the game reminded me of Capcom’s first foray into western rpg, Dragon’s Dogma, which was a weird and flawed game that I loved very much. That game’s best moments were fighting huge mythical beasts, but there you could grapple and climb them and the fights felt a lot more dynamic that in Monster Hunter World, where the confusion of controls leads to me mostly button-mashing my way through fights. Even the Palico, while obviously a much cuter version, is playing basically the exact role of the Pawns in Dragon’s Dogma.

It’s also impossible not to compare it to Horizon Zero Dawn. The combat here is a nightmarish abomination of Horizon Zero Dawn’s. In HZD, switching from the ranged attacks to melee was smooth and intuitive, as was switching ammunition and even crafting ammo mid-battle. I am still not sure how to switch the ammo on my ranged weapon in this game, and half the time when I try to shoot I still have my bug-catching net equipped because those are on the same button for some reason, so ranged combat is pretty useless to me for now. Things I have read since I started playing have suggested that the controls and mechanics in Monster Hunter World are actually streamlined compared to older titles in the series? 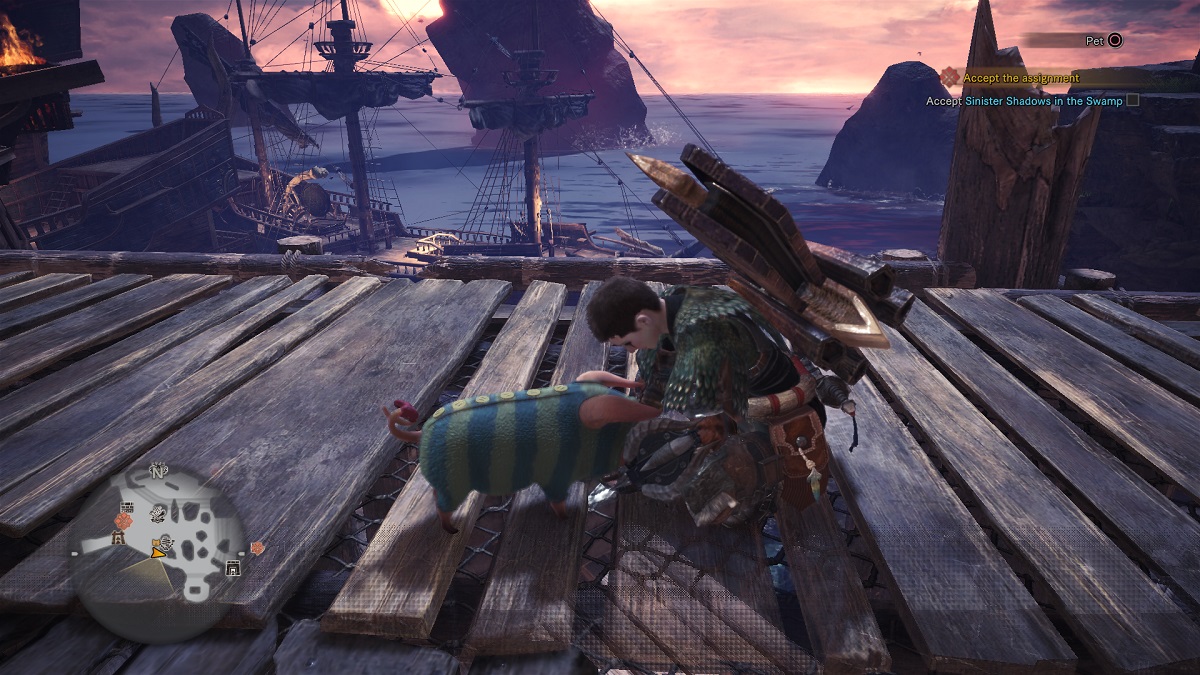 Press X to pet this pig.

But, they gave me a cat. And even if I don’t especially want to kill the dinosaurs, who have been killed enough by now in my opinion, seeing Budgie whacking a T Rex in the face with a lute that I made her to distract it long enough for me to chug a health potion really does just warm my heart. And you can play with your friends, and your friends’ cats, and I have always wanted to have play dates between Budgie and some cats who know who they are and this is probably the safest way to ever make that happen. And the fiddly absurdity of the controls has already begun to grow on me. And last night I somehow landed on top of a stegosaurus looking thing after sliding down a hill in a move I will probably never be able to recreate and I rode it like a bull and it was so exciting? 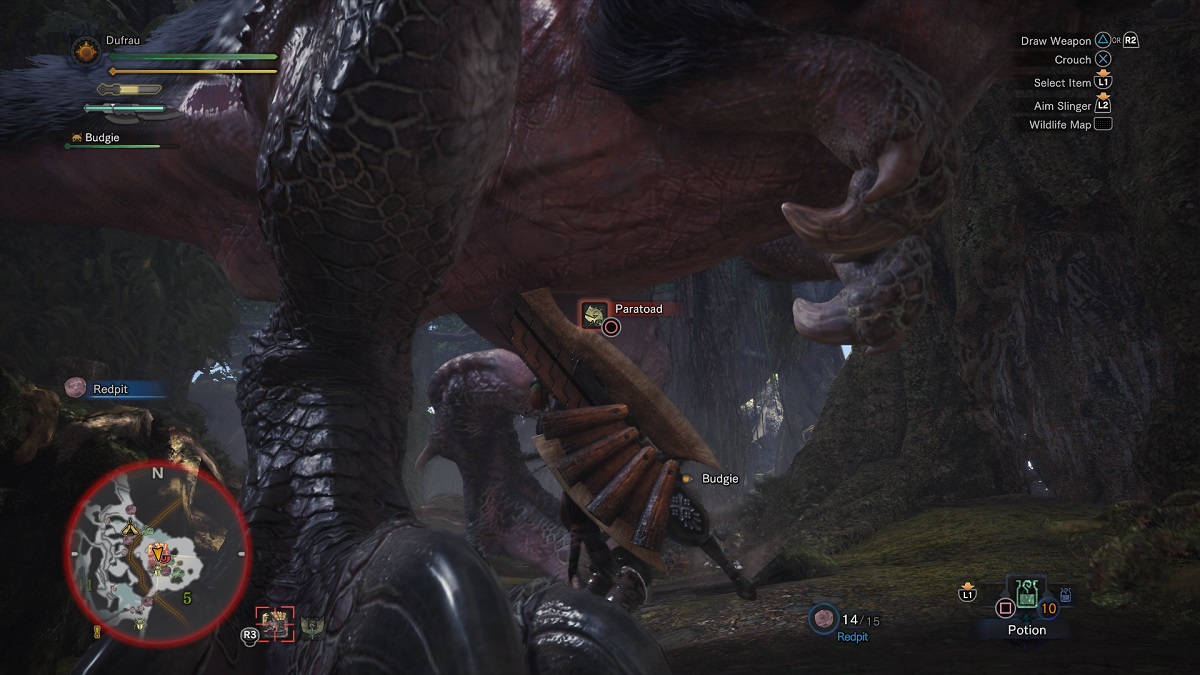 It is hard to screenshot while fighting a T Rex this was the best I could do.

Monster Hunter World is out now for Playstation 4, and is planned for release on Windows sometime this year. It costs a whopping $60, but it runs smoothly and looks nice and does all of the things it is supposed to do. It feels like a $60 game. Let’s be honest, I would pay $60 just for the cat content, the rest of the game is gravy. But I like gravy, so here we are.