There was a spate of studies a few years ago about the relatively high prevalence of sociopathic traits amongst CEOs and successful politicians. I think about that a lot when we talk about what a matriarchy might look like or when I’m on the phone with male CEOs who are trying to manipulate me and also won’t let me talk. Like how women are socialized to value community, honesty, and empathy, which is good for socialism, except that we live in a capitalist society, which works out well for men, who are socialized to compete and win at any cost, even if it requires lying and manipulation.

I thought about all that a lot while watching the American Horror Story: Cult finale, in which through a series of reveals, twists and time-jumps, we learn that defamed Michigan Lesbian Ally Mayfair-Richards got Kai’s cult busted by the FBI and eventually ends up running for Senate herself, as Kai once intended to do but no longer can, as he’s now imprisoned. Furthermore, Ally wins, and furthermore she has a new hot girlfriend (“of eight weeks and two days” she tells Beverly) named Erika who is going to make the mint cake for Oz’s birthday in honor of Ivy and furthermore Ally has her own cult now and wears a mysterious velvet cape and hood like she’s a g-ddamn Death Eater. 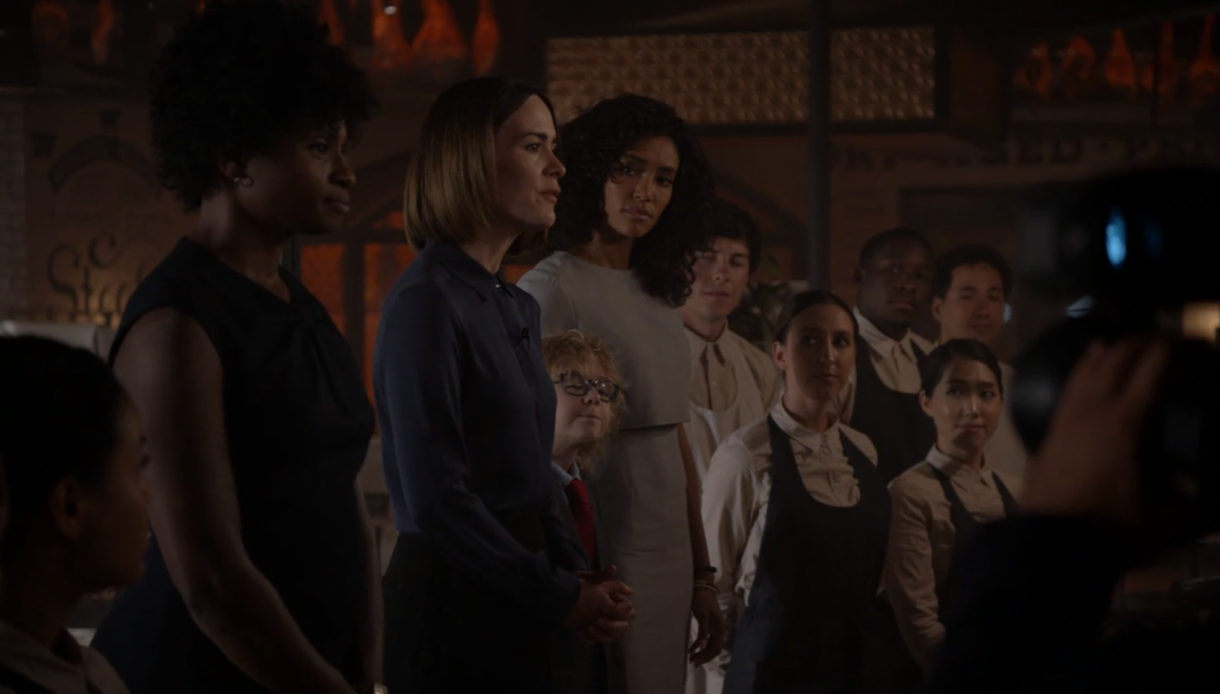 Ally announces her candidacy, flanked by Beverly, her son Oz, and her new girlfriend of eight weeks and two days, Erika, who is conveniently also a chef

It kinda all ended up landing how the Valerie Solanas episode did: an interesting, complicated and mildly feminist concept working for a minute and then going entirely too far and then falling off a cliff and getting stabbed to death by wild animals in clown masks. The women in this story have plenty of cause for frustration, rage and disgust with the status quo, but instead are angry at other women, or feminism, or their wives for giving birth to their children.

So, the FBI came to Ally in the psych ward, recruiting her to help destroy Kai’s cult. She orchestrates a bust on the planned Night Of 100 Tates (don’t ask) which ends up becoming a deadly shootout that only Kai and Beverly escape unharmed.

The FBI reveal was a tricky one — “why did Ally join the cult?” had already been asked and answered: she wanted her son back, and to punish Ivy. So it didn’t answer that. What it laid bare, instead, was why Ally did what she did in the cult. Was it really about protecting herself and Oz, or was it about getting away with murder because she’d already been granted immunity? ‘Cause once she got up in there, she started murdering humans like I murder flies, which is to say, obsessively and with possibly demented enthusiasm. Even with the guarantee of an eventual FBI-enabled Cult Expiration Date, she still set up his innocent brother to get murdered, failed to intervene to prevent Winter’s murder, murdered her own wife (which was fair, but), murdered alleged OG Feminist Icon & Dramatically Eyebrowed Babe Bebe Babbitt, and stabbed Speedwagon to death directly after learning he was the only guy in the cult who didn’t believe in it. (He was wearing a wire for the State Police in a deal resulting from an ecstasy bust.) Ally kills men, sure, but she kills the only two men in the story who weren’t hapless followers of Kai’s idioacracy. She even kills Bebe to save Kai’s life. But we already knew she was terrible ’cause of that time she killed Pedro accidentally and was all-too-willing to hide behind a racist police department when it suited her needs, right? 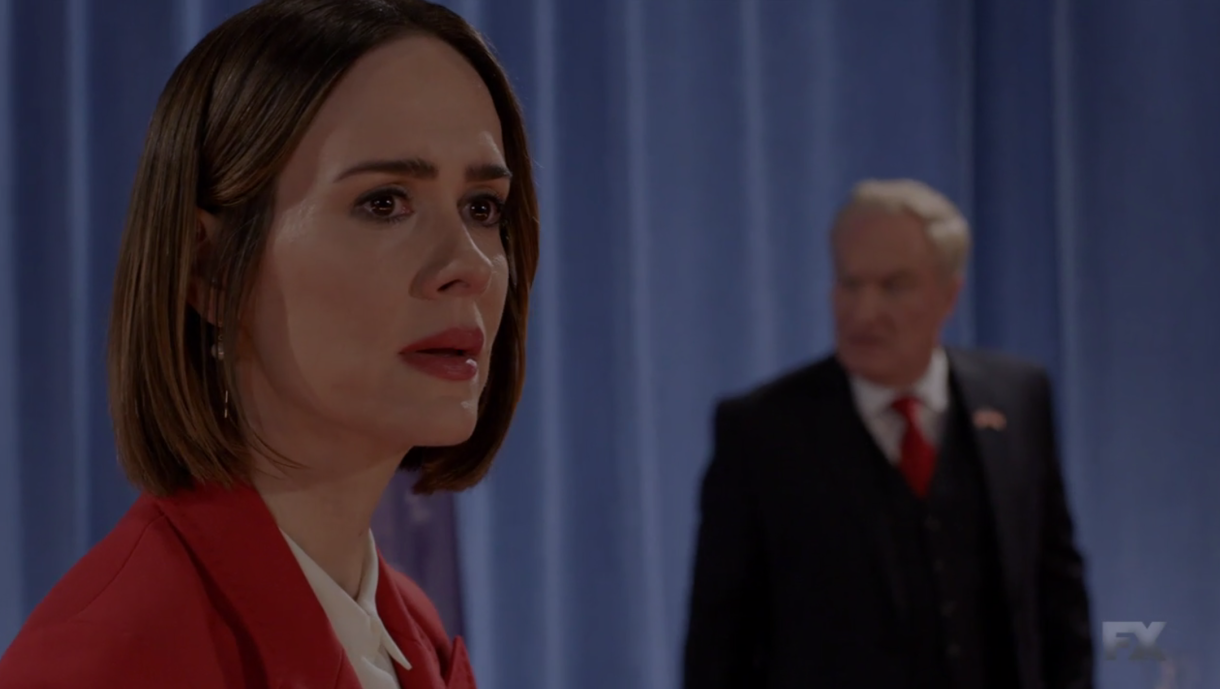 I wonder if that hot dog vendor could bring me a hot dog too….

She’s no Valerie Solanas. She’s no Aileen Wournus — the famed lesbian serial killer who’d been abused her whole life who eventually cracked and began killing johns who tried to hurt or rape her. And she’s certainly no Lana Winters, who endured rape and torture to be the last woman standing in American Horror Story: Asylum, a truly exceptional season of television. Lana Winters comes up in this episode too, before Ally runs for office, when she’s still just that Cult Survivor — she turns down an interview with Rachel Maddow and Beverly is like, “she turned down Lana Winters, you think she’s gonna say yes to Rachel Fucking Maddow?” What self-respecting lesbian turns down a chance to sit in the same room as Rachel Maddow or Lana Winters? What’s going on here?

In Cult, feminism, in the context of government, is just another ideology people ascribe to without looking too hard. A personality cult, I guess.

After the FBI bust, Kai begins building a new cult within prison. While Ally delights in telling him that now his “gang of circle-jerking fascists are all dead” and he is “trapped in a cage with nothing but other men,” where his “sick ugly DNA will rot in prison” until he dies,  Kai tells his followers that the sex-segregation is an essential element of his plan for their rise. “While women destroy the world outside, we wait safely for our time to strike,” he orates.

Kai’s enraged that Ally’s running for senate, claiming she’s merely his creation. He says women aren’t fit to lead, and that Ally’s candidacy reflects a woman’s impossible dream of one day winning a fight against her husband. He’s enraged enough to escape prison to try and murder her at the senatorial debate, but some behind-his-back conniving between women thwarts his attempt, and instead Beverly gets the chance to shoot him dead. Also Ally gives an inspirational speech about how a bunch of special snowflakes become a blizzard, Because Feminism.

Ally’s ascendence isn’t so much the rise of the matriarchy as a very compromised version of it, or the patriarchy with an unfortunate typo. Now she’s a deft manipulator, openly exploiting tragedy like a skilled politician. In some ways, it’s another jab at Ally’s protest vote for Jill Stein in a highly contested swing-state race, enacted because Ally just “couldn’t trust” Hillary, who she perceived as an establishment candidate. She chose idealism over pragmatism, and now embodies the paradigm she once decried. Maybe that’s the point of the whole damn series, if there is one at all — even for actual or self-proclaimed outsiders, ultimately the master’s tools are the only ones with heads that fit into the screws that hold together the master’s house. And at the end of the day, at least she’ll take better care of it than the man she was running against.

The only real triumph in Cult, besides a set of tremendous performances from Paulson, Adina Porter, and Evan Peters; is that Ally isn’t the only last woman standing — she’s one of two. Miraculously, despite enduring unspeakable torture that has scooped her heart right out of her body and worn her down into a shadow of her former self, Beverly, the only prominent character of color on the show, also survives. So, there’s a pile of tropes and one lampshaded trope for you.

Now, Beverly Ally’s campaign manager. Beverly, my love! Early on, there’s a Handmaid’s Tale type scene where the women are preparing food while the men stab watermelons to rehearse killing pregnant women at lamaze class (right), and Beverly is chopping some greens and not really taking any of Ally’s nonsense which is all basically a variation on “blessed be the fruit.” Beverly, chopping madly before begging Ally to kill her, intones, “yes the divine rulers wisdom is an inspiration, i’m very privileged to be making this watermelon and feta salad. A glorious recycling of The Night of 100 Tates practice session. Nothing goes to waste with this amazing crew.” It’s my favorite part of the episode. 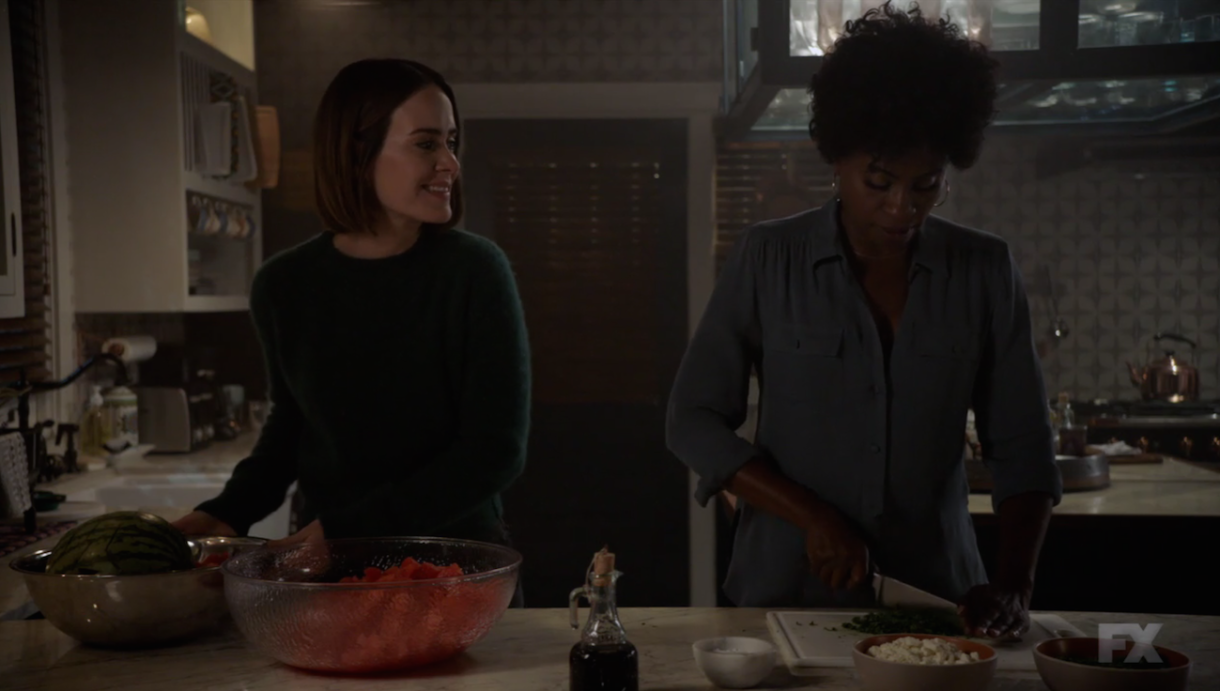 Hey Beverly, did I ever tell you about that time I made a salad while on a backpacking trip through Europe I took after undergrad?