This evening, I turned to my fiancée and asked in all earnestness: “Do you think it would be too mentally taxing for us to watch something new tonight? Or should we watch something old again? I’m undecided.”

If you, too, are running low on decision making power, just go ahead and watch Alias Grace. It’s great.

+ How I Get It Done: Jane Goodall, Primatologist

+ Helen Quinn will receive the prestigious 2018 Benjamin Franklin Medal in Physics for her pioneering efforts in developing a unified theory of the electromagnetic, weak and strong interactions

We won’t know for sure how many footprints are preserved until we uncover the entire surface, but our initial surveys show that there is at least one footprint per square meter, so we know that we are dealing with potentially thousands of dinosaur footprints. That noise you hear is very excited science-y squealing. 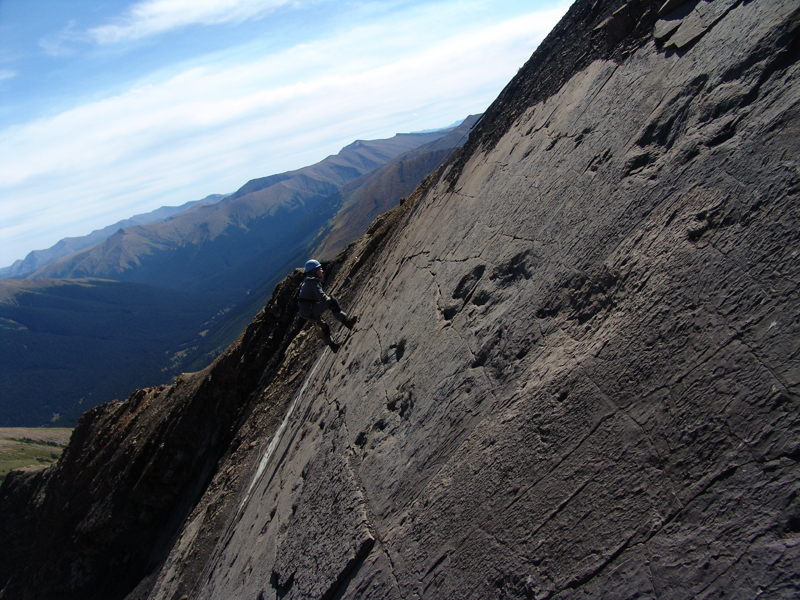 “This shot of me from Kakwa Provincial Park in 2006 (taken by R. T. McCrea) is typical of most of our dinosaur footprint sites in northeastern British Columbia: steeply inclined.” – Lisa Buckley

+ Meet Naomi Wu, Target of an American Tech Bro Witchhunt. Dale Dougherty, CEO of Make magazine, accused her of being fake because… she’s pretty?? Get it together, men.

What Dougherty and the other sexist Americans writing about Wu don’t understand is that Wu’s home of Shenzhen, China, has allowed femininity to exist at the intersection of technology and art. The city is almost 35 years old—”one of the youngest cities in China,” Wu explains—and it can have a “cyber punk” quality (think Los Angeles in Blade Runner or Neo Tokyo in Akira). So while Wu might wear tiny outfits that accentuate her large synthetic breasts, dressing outlandishly isn’t that unusual in a city like hers. “I know it can seem odd by Western standards,” she explains on her Patreon page, “but it’s not disrespectful or frowned upon here.”

+ Trump’s top environmental pick says she has ‘many questions’ about climate change. :(

+ Budget shortfalls and aging ships are starting to undermine key climate-change data-collection programs that help scientists gauge the state of the world’s oceans.

+ Update from the New York Times on disaster capitalism in Puerto Rico: “The [Whitefish] Lineman Got $63 an Hour. The Utility Was Billed $319 an Hour.” Outrageous gouging. Furthermore, Puerto Rico’s electric company disregarded its own lawyers’ advice when it signed the $300 million contract that offered so few protections that it allowed some workers trying to fix the battered power grid to bill for “nearly every waking hour” they were on the island.

+ It’s Not Just Hollywood, It’s Time to Sound the Alarm on Sexual Harassment in Our Schools

+ 15,000 scientists — the most scientists to ever co-sign and formally support a published journal article — have issued a warning to humanity:

To prevent widespread misery and catastrophic biodiversity loss, humanity must practice a more environmentally sustainable alternative to business as usual. This prescription was well articulated by the world’s leading scientists 25 years ago, but in most respects, we have not heeded their warning. Soon it will be too late to shift course away from our failing trajectory, and time is running out. We must recognize, in our day-to-day lives and in our governing institutions, that Earth with all its life is our only home.

+ Be kind to spiders; myths and legends dispelled

+ Can Carbon-Dioxide Removal Save the World?

+ What Museum Collections Of Century-Old Birds Tell Us About Our Dirty Air. Spoiler alert: humans ruin everything.

+ Revel in the mathematical joy of Smarties with Vi Hart:

+ Your company’s Slack is probably sexist. (Here are some ways to fix it.)

+ How the ‘Shalane Flanagan Effect’ Works – Okay, this isn’t STEM specific, but it’s about women coworkers supporting each other and outperforming men! I found it legitimately inspiring.

+ Would you like to take this survey about #IronViz? Emma Whyte, Eva Murray, Emily Chen, and Lorna Eden are taking a data driven approach to fix the gender inequality among participants

+ Tired of #AllMalePanels and #AllWhitePanels? Check out these resources for finding diverse voices in the US and around the world.