Michele Bachmann’s hyper-public, vitriolic homophobia is, by now, old news. Infamous for saying that queerness leads to “enslavement,” “bondage” and “child abuse,” there is literally no line Bachmann won’t cross when it comes to describing her hatred and fear of the LGBTQ community. And that includes the lines of her own family, one of whom is a lesbian.

Helen LaFave, Bachmann’s lesbian stepsister, has only spoken briefly with a few journalists over the past few years, avoiding public confrontation. Unsurprisingly, Bachmann has not given LaFave the same courtesy, and has mentioned in speeches her sadness over having a gay person in her family, likening LaFave’s “lifestyle” to “Satan.” 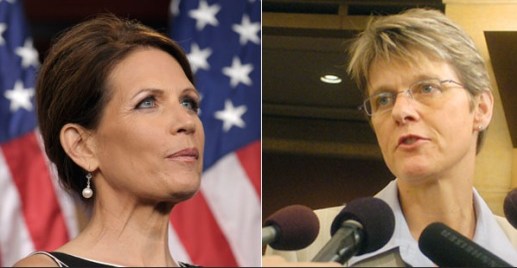 But as the referendum on same-sex marriage in Minnesota approaches, it’s LaFave’s turn to make headlines. In an interview with The New York Times published over the weekend, LaFave spoke candidly with Frank Bruni about her relationship with her stepsister, and the heartbreak Bachmann’s extremism has caused. Compelled by the rights that hang in the balance of the vote, LaFave felt it was time “to speak out for fairness for those of us who are being judged and told our lives and relationships are somehow less.”

In the interview, which is both painful and inspiring, LaFave talks about her relationship with her stepsister, and how Bachmann’s political career has been a betrayal to what LaFave had believed was a strong bond of sisterhood.

LaFave and Bachmann have been stepsisters for approximately forty years, not all of which were strained. When Bachmann’s mother married LaFave’s father, Bachmann was in college and LaFave was finishing high school. The two spent their summers together, and LaFave looked up to her new stepsister. As the years passed, they never stopped exchanging hugs and “I love yous” at family gatherings; Bachmann even grew to know Nia, LaFave’s partner of nearly twenty-five years. Though the sisters never had a conversation about LaFave’s sexuality, Bachmann’s evangelicalism wasn’t a secret — nonetheless, LaFave was shocked and horrified when “Michele began to use her position as a state senator in Minnesota to call out gays and lesbians as sick and evil and to push for an amendment to the Minnesota constitution that would prohibit same-sex marriage.” She told the New York Times, “It felt so divorced from having known me, from having known somebody who’s gay. I was just stunned.”

So on November 23, 2003, LaFave sent her stepsister a letter, and sent copies to other members of their family. She wrote, “You’ve taken aim at me. You’ve taken aim at my family.” She also wisely wrote, “Some people, you included, feel like you know the truth about my relationship. I think you also believe you know what God thinks of it.” Michele didn’t write back.

LaFave, who supports Obama, and several members of her family showed up to the 2006 Senate hearing in which Bachmann spoke about a constitutional amendment banning same-sex marriage, though not because she wanted to make a scene. In perhaps the most moving part of the interview, LaFave told Bruni,

“I wasn’t looking to make a public statement… I just thought: I’m going to go there and sit there so she has to look at me. So she has to look at Nia. I wanted her to see: this is who you’re doing this to. It’s not some anonymous group of people. It’s not scary people. It’s me. It’s Nia.” She paused, because she’d begun to sob. “I just wanted her to see me,” she said, “because it just feels, through the whole thing, like she hasn’t.”

And that’s what is so upsetting about Bachmann. Even though to LaFave, it feels like she hasn’t been seen by her stepsister, based on Bachmann’s own words, it appears as though she does see her, but it doesn’t change her opinion. While many other people have had their opinions on gay rights swayed by loving a gay person, Bachmann doesn’t have that built-in moral compass. In her twisted mind, Bachmann’s homophobia translates into “sadness” when it comes to her stepsister. The fact that LaFave is in a loving, happy relationship is seen by Bachmann as the work of Satan. And so it would appear that other people’s happiness does not count for anything if it’s not on Bachmann’s terms.

I am moved and impressed by LaFave’s bravery in speaking out, and especially that she spoke out against the big sister she used to look up to. But I doubt her words were for her sister; after all, she’s already tried reasoning with her. Hopefully her words will reach those who actually have the capacity for empathy, and they will remember her story as they vote. It’s important that we continue to attach faces to our activism, and by publicly sharing the pain that Bachmann’s homophobia has caused her, LaFave has done just that.