Megan Smith was already Vice President in charge of Google [x] and pioneer of their WomenTechmakers Program, former CEO of PlanetOut, Silicon Valley hard-hitter and married to Kara Swisher of Re/code (though one source says they have recently separated after 15 years). Now, as of September 4th, 2014, she’s also Chief Technology Officer for the Obama Administration. She’ll be taking on the role, a position created by the Obama Administration, with Twitter’s Alexander Macgillivray (who advocates for the free flow of information on the internet) as her deputy. President Obama said of the appointment:

Megan has spent her career leading talented teams and taking cutting-edge technology and innovation initiatives from concept to design to deployment. I am confident that in her new role as America’s Chief Technology Officer, she will put her long record of leadership and exceptional skills to work on behalf of the American people. I am grateful for her commitment to serve, and I look forward to working with her and with our new Deputy U.S. CTO, Alexander Macgillivray, in the weeks and months ahead.

Here are all the reasons I can think of why this is super amazing and really important. 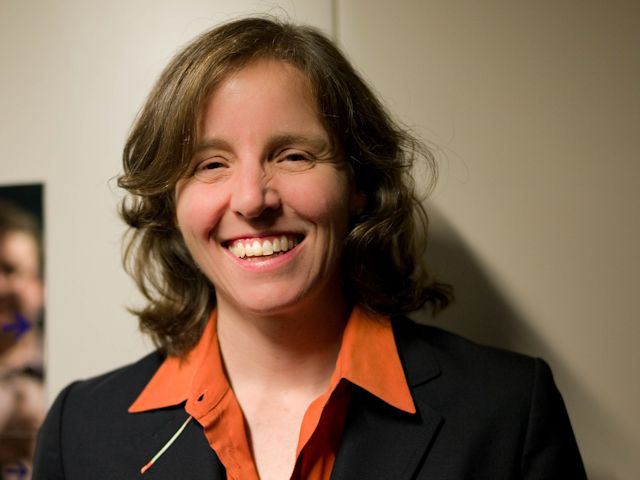 FYI, this is Megan Smith. photo by Joi Ito Via Re/code

Megan Smith is going to be the third CTO to ever exist ever in the government. Right now, the role is described on Forbes as:

The U.S. chief technology officer’s duties have not had time to be clearly defined — the role was created on Obama’s first day in office, and outgoing CTO Todd Park spent much of his time working on the Healthcare.gov initiative….The White House statement suggests Smith will be given a long leash — she “will guide the Administration’s information-technology policy and initiatives.” Macgillivray will “focus on a portfolio of key priority areas for the Administration, including Internet policy, intellectual property policy, and the intersection of big data, technology, and privacy.”

Some of the goals set for on the White House website for government use of technology (and thus, for this position) include:

Protect the Openness of the Internet: Support the principle of network neutrality to preserve the benefits of open competition on the Internet.

Bring Government into the 21st Century: Use technology to reform government and improve the exchange of information between the federal government and citizens while ensuring the security of our networks. Appoint the nation’s first Chief Technology Officer (CTO) to ensure the safety of our networks and lead an interagency effort, working with chief technology and chief information officers of each of the federal agencies, to ensure that they use best-in-class technologies and share best practices.

You’ll notice, however, that no one really has an answer about how to do this. I mean, that’s not true. Loads of people have loads of different answers but there is no “one right way” to do any of this, not yet at least. As the third CTO ever, Megan Smith is going to have a major hand in not only defining what the CTO actually does, but exactly how she does it and what the goals should be. Here’s the first CTO ever, Aneesh Chopra, talking about it:

Megan Smith’s previous role with Google meant she was in charge of “moonshot” projects — projects that seem impossible. Google X has developed a ton of ideas that people were like, naw, that’s crazy. They developed that Google driverless car that I’m still super on the fence about. But what that means for the United States Government is that Smith is used to dealing with impossible challenges. And honestly the relationship between government and technology is one of those seemingly impossible challenges. It’s almost a joke, how bad the US government’s technology is:

“The U.S. government for the most part, other than the Defense Department or NASA, is driving a 1980s Pontiac”  said Andrew Rasiej, founder of Personal Democracy Media. “It hasn’t been upgraded even to a 1992 Camry.”

An inherent challenge for the CTO is that the job doesn’t come with the same purse-string privileges that often accompany the title in private industry.

According to Wired, “When it comes to computers, the federal government has a nasty reputation for prizing ISO standards and regulatory checkboxes above working code.” But in that same article, they highlight the purpose behind some of the White House’s newest recruits — employees hired for their ability to change that. Check it:

Healthcare.gov was essentially a disaster at first, and a better relationship between government and technology could have made it smooth sailing from the start—it truly could have. And I feel like the hiring of Megan Smith, one of the brightest shiniest stars in the industry at the moment, is a commitment to making that better relationship happen even though it seems like a massive mountain to climb. Because after all, Smith’s entire deal is making the impossible into reality. Maybe she can make that happen on a public sector budget. She is, after all, the futuristic lesbian MacGuyver.

Furthermore, Smith is going to be steering this boat at a really interesting and important time — the seas are choppy with net neutrality, with NSA spying techniques. The decisions Smith makes in this role could impact the technology sector in this country and globally for decades. As we all know, decades in technology are actually lifetimes. Eons. This is a big fucking job and it’s a big fucking deal. I hope she nails it. Because according to Re/code:

The challenge before Smith and Macgillivray is not merely to help avoid taxpayer-funded boondoggles, but to help shift the culture, policies and practices to ensure that government is operating in the same information age driving this nation’s economy, observers say.

“You have a generation of kids who grew up with the iPhone, and their service and design expectations are different as a result,” said Clay Johnson, chief executive of the nonprofit Department of Better Technology, also interviewed before Smith and Macgillivray’s names were made public. “If these problems don’t get solved and government doesn’t become a tier one technology service provider with people, then the federal government is doomed.”

If you are a regular reader of Queer Your Tech With Fun, you might have noticed many of my subtle hints that the treatment of women in the technology field, hell, even the existence of women in the technology field, is pretty abysmal. And that one solution to bolstering the number of women in not just the tech field, but in STEM fields at large, is to provide visible examples to women. Specifically, to provide examples to middle school girls to get them interested in those topics that will lead them to a fulfilling STEM career. Obviously, this is just one facet of The Solution, but an important facet nonetheless. Girls who are entering sixth grade now will grow up in a world where the person directing The United States technology policies and big decisions is a female person. That’s massive! And lesbians in the tech field have previously felt this weird sense of isolation (though we are growing organized thanks to the Lesbians Who Tech organization and summit). I mean, imagine—there are barely any women in the tech field at all, so the numbers of gay women? Eeensy weensy—many lesbians who tech don’t go to work and find their people, ya know? And gay networking events have historically been gay men, gay men and more gay men. It’s just awesome to be able to point at a very visible, recognizable and powerful government position that is based on having a massive amount of technology knowledge and say “LOOK WE EXIST LOOK LOOK LOOK.”

Why else is this really important? Please let’s talk about it.

This has been the ninety-fourth installment of  Queer Your Tech with Fun, Autostraddle’s nerdy tech column. Not everything we cover is queer per se, but we talk about customizing this awesome technology you’ve got. Having it our way, expressing our appy selves just like we do with our identities. Here we can talk about anything from app recommendations to choosing a wireless printer to web sites you have to favorite to any other fun shit we can do with technology. Feature image via PRX. Header by Rory Midhani.