I am a gadget person. I love cool technology. And Project Ara is definitely cool technology. Project Ara refers to a set of instructions for building a modular smartphone—meaning that the hacker/DIY ethos of open operating systems like Android could very well be coming to hardware near you. We already know you love the idea of making your own computer — what if you could select your ideal components from all sorts of different manufacturers and slot them onto a board and have them all talk to each other? If you use a lot of storage, great—slot that block on. If everything you have is in the cloud, maybe boot off that extra storage for a bigger, better battery or a really kickass speaker from your very favorite audio company. Google ATAP (Advanced Technologies and Projects, basically teams of mad scientists making the future happen) is bringing together many companies and developers to put together a product that will (hopefully) have a recognizable presence by 2015 because everyone at ATAP has a self-imposed deadline of two years to create real products to sell to real people.

A modular smartphone would allow users to customize their phone, picking what’s important to them and leaving out what isn’t. That’s huge for someone who wants affordable options—an iPhone is a $600 piece of equipment, and many users want the power of one component, but couldn’t give one flying saucer about others. It’s, frankly, a brilliant idea for those of us looking to spend dollars where it counts. 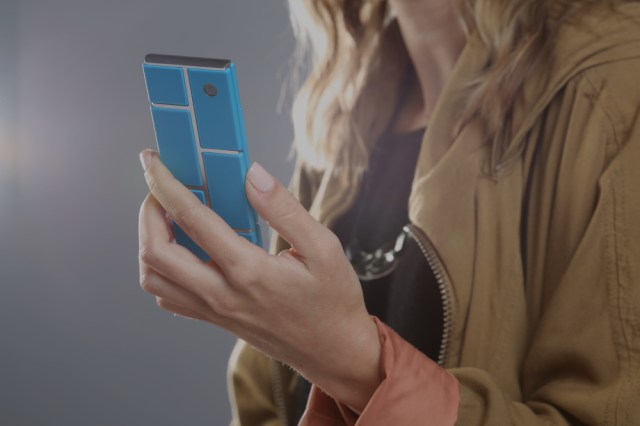 It also means that phones will be upgradable, rather than disposable. The attitude behind our current smartphone consumption is that the device will last for about two years, and then it’ll be dumped in favor for something newer/faster/shinier. The entire unit goes even if small changes are made to only a few components, and consumers have to purchase a whole new unit to get that one change that they care about. Not only does an upgradable smartphone make a whole lot of financial sense, it also makes a whole lot of environmental sense. E-waste could potentially be reduced if fewer people are throwing out entire devices (and e-waste is not like Wheaties for Planet Earth, let me tell you. E-waste kinda blows).

And Project Ara has released their module developer kit. In fact, there was already a two-day developer conference (April 15th and 16th). I’m looking at y’all, Techstraddlers. If you’re not the techiest but still think this is pretty cool, you can sign up to be a Project Ara scout and tell ATAP exactly what you’d be looking for in a modular smartphone.

My initial response to Project Ara was sheer excitement—when can I get one? This is the future. This is the ultimate for people who like to futz with their technology.

But I’d also like to tell you a story — a story that Kronda Adair, programmer extraordinaire, told at the Lesbians Who Tech conference. She once had a job painting fire hydrants. And she said that for a long time after that, she would notice fire hydrants while she was doing anything else (“That one’s red! That one’s green!”).

I worked in the tech industry. And I have my own fire hydrant of sorts. When I watch tech announcements, press coverage, basically anything with a video or photos, I constantly have a little tape playing in the back of my skull: “There’s a man. There’s a man. There’s another man.” Though ATAP is headed by a woman, representatives of roughly 50% of the human populace are missing from at least the visible Project Ara team. I can find zero women in photos, mentioned in articles, or visible in videos. I reached out to Google to confirm that these numbers were correct — they have not yet gotten back to me. But here’s the public face of Project Ara:

Paul Eremenko is the team leader. Dave Hakkens is the designer behind Phonebloks. Seth Newburg and Ara Knaian are the members of NK Labs overseeing the mechanical, electrical and software engineering. 3D Systems CEO Avi Reichental is developing the high-speed 3D printer needed to make these modules. Senior Vice President Sundar Pichai is the head of the Google division that includes ATAP. In this entire Time article that lists all of these fabulous and qualified men, only one woman gets mentioned: Regina Dugan, ATAP’s leader. This lead me into a little more Google digging — if you visit the press website and head to the section with pictures of leadership, only one woman appears there. While I was at it, I went and looked at the Google+-released video for ATAP’s other recent announcement, Project Tango:

In this video, I found two people who might identify as women, but I couldn’t really say—I haven’t found them mentioned by name in any press and neither one of them spoke for themselves in this video (hell, they weren’t even in the foreground). No one used pronouns on their behalf, so who knows really.

A quick Google shows that Google has a woman problem—so does the entire industry, to be fair, and so does the entirety of western society. It really isn’t just Google. But what gets me is that I know women work there—Google has worked really, very hard to retain their female employees in a country with abysmal work-life balance and family policies. So why, in this group that represents the bleeding edge of innovation, a group of elite inventors and engineers, are the woman not readily visible? Even if women do work on Project Ara, where are they?

And we know that it makes a difference whether or not women are visible in a field. Stepping away from the tech industry for just a second, actor Geena Davis shared a very interesting theory with NPR on women’s visibility in movies and how it relates to the massive gender gap:

My theory is that since all anybody has seen, when they are growing up, is this big imbalance – that the movies that they’ve watched are about, let’s say, 5 to 1, as far as female presence is concerned – that’s what starts to look normal. And let’s think about – in different segments of society, 17 percent of cardiac surgeons are women; 17 percent of tenured professors are women. It just goes on and on. And isn’t that strange that that’s also the percentage of women in crowd scenes in movies? What if we’re actually training people to see that ratio as normal so that when you’re an adult, you don’t notice?

Or how about this quote:

Relating that back to tech, the women (who really were there at the start of Apple) were almost entirely erased from Jobs, the biopic staring Ashton Kutcher. And here we are, back in tech and back in visibility.

Not seeing the female Googlers present a project to the press or be interviewed for what they are working on sends a message—this is not for you. It’s not made for you and it’s not an industry for you. The gadgets are the toys for the boys. And frankly, I don’t think that’s the message that Google intends to send. But hey, they may not notice — reminds me of that episode of the Big Bang Theory where they attempt to target middle school girls to get them interested in science:

They go and talk to some middle school students, but not until they get there do they realize they should have sent the actual two females in the field that they know and have direct access too. I imagine it’s more like that not noticing rather than anything malicious. Don’t worry, Google, I see you. I see your positive intent.

If the tech industry is constantly sending the message that one woman on a team, not speaking, is totally enough, then how are we going to solve the shortage of women in tech? The people the industry has to convince is basically middle school aged girls—that’s who you have to welcome in order for the tech industry to solve the problem. I’m not saying Project Ara isn’t cool — I’m not saying I won’t support it. On the contrary, it’s awesome and has the potential to solve a couple very real problems. But I would be remiss if I didn’t point out that I can’t see any of the women who worked on it, and yet I am assuming they’d really like women to buy it when it’s a real phone. If even Google, a company whose motto is “don’t be evil,” can’t present a female face on their team of mad scientists (even if they do exist), then everyone needs to do just a little bit better.