Mild spoilers below for Mary Lambert’s role in Arlo the Alligator Boy.

Two stories spring to mind when imagining a parent putting a baby in a basket and sending it downriver, to grow up far away from home: Moses of Israel and the Penguin of Batman Returns. One of them led their people to freedom, the other went on a fishy vendetta against the entire city of Gotham. And now there’s Arlo the Alligator Boy (voiced by Michael J. Woodard), who doesn’t have Moses- or Penguin-sized dreams when he finds out his home on the bayou was just where he washed up, and Edmée (voiced by Annie Potts) is his adopted mom. He simply wants to return to New York City, from whence he set sail as a baby, and maybe find his dad, and maybe meet more people like him. He also wants to sing a lot and generally look on the bright side of life. Arlo is more Strawberry Shortcake in Big Apple City than Rent, but it’s certainly influenced by all the gay and trans and gender non-conforming characters who fled to Manhattan to find themselves before him. 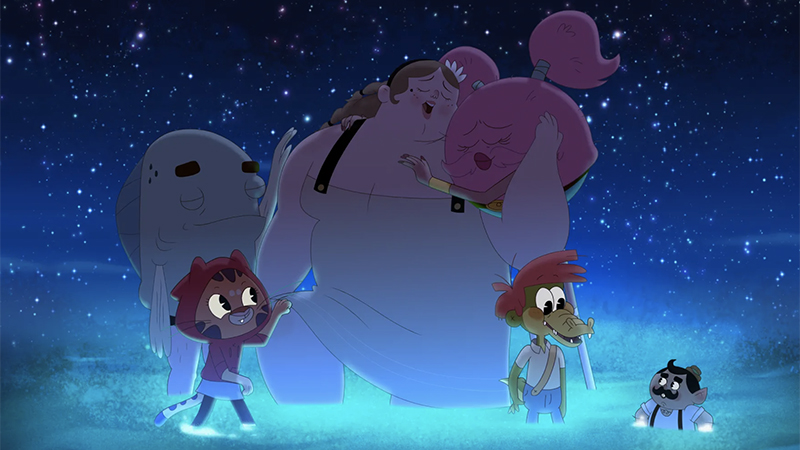 Arlo, who is half-human and half-alligator, doesn’t have a childhood rooted in trauma. He’s just different. The humans he sees on their big fancy swamp boats don’t want anything to do with him because he looks like a monster to them, and the other animals think his propensity to break into song and dance at the slightest provocation is scandalous. So Edmée sends him on his way to New York City — “The world is going to be a better place with you out in it!” — and along the way he discovers a found family. It starts with Bertie, a 13-foot giantess voiced by Mary Lambert, who helps him escape the evil clutches of a pair of gator-hunting propagandists (Jennifer Coolidge and Flea from Red Hot Chili Peppers) who want to capture him and put him on display in their evangelical charade of a church.

Bertie tells Arlo that she’s self-conscious about her body, not because she personally doesn’t think she looks beautiful and powerful, but because other people have always made fun of her. Arlo gets it! He really gets it! And so he and Bertie become BFFs and start traveling together. Lambert is charming as all heck in this role. It’s the first time I’ve ever heard her sing songs that aren’t her own, or covers of songs she made her own, and she is just so great. The music is pop-heavy, so not what we’ve heard from her lately, but her voice fits the style of the movie beautifully. It’s perfect casting. Plus there’s absolutely no jokes at the expense of Bertie’s size. 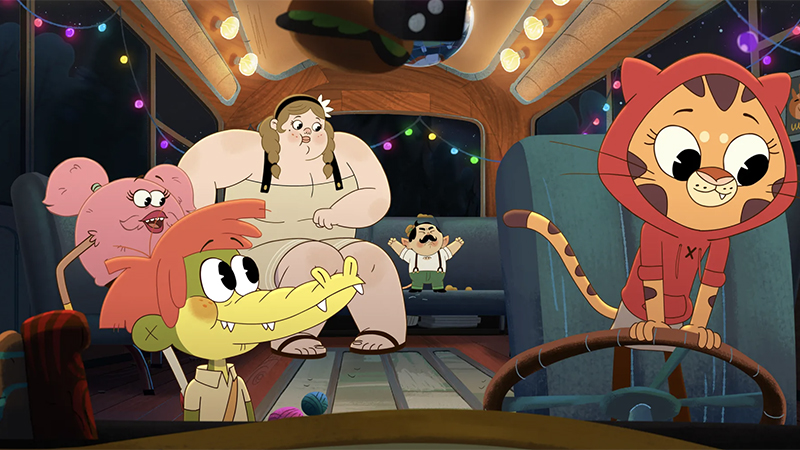 Before long, Arlo and Bertie meet up with even more outcasts. There’s Tony Hale’s Teeny Tiny Tony, who looks like a gnome. There’s Haley Tju’s tiger girl. There’s Jonathan Van Ness’ Furlecia, a cotton candy-colored furball with pigtails, mascara, a mustache, and high heels. And there’s Brett Gelman’s merman. Sorry, reverse merman. (His top is a fish and his bottom is human.) As they head toward the big city — and the 20 episodes that will follow their musical film debut — this ragtag group of human/animal hybrid pals sing their way out of every scrape as they learn more about themselves and each other.

I feel a great sense of protectiveness over stories where gay — and gay-coded — kids from the rural south flee the oppression of their upbringing to try their hand in the Big City. On account of being one of those kids myself. Arlo gets so much right about both places, looking at each of them through a lens that’s both loving and clowning. The funniest sequence of the movie features Arlo & Co. crashing and smashing their way through everything there is to see in NYC, without anyone in the city even batting an eye. Which is the truest joke anyone ever makes about New York. But it isn’t all glitz and glam, and Arlo and his friends face heartbreak too. Following in the footsteps of Gossip Girl, where Serena and Blair always ended every episode at a giant third-act party, the gang ends up at the Met Gala, their wild and weird and circus-colored dream destination. And, of course, they learn that the destination wasn’t the point at all.

If you love Steven Universe, The Owl House, or Kipo and the Age of Wonderbeasts, (or honestly High School Musical), add Mary Lambert and Arlo the Alligator Boy to your queue. I also have no doubt the queer-adjacent storyrtelling and characterization will become even more explicitly gay when the individual episodes land.