In the first five minutes of the first episode of The Owl House, Luz Noceda wonders out loud, “Why does everyone think being a weirdo is so bad?” She’s just gotten in trouble at school, again, for freaking out her classmates with snakes and spiders and fantasy land daydreaming, and her mom has decided to send her to Reality Check Camp for the summer so she can learn to “think inside the box.” Luz is bereft; she just wants stay home and do the things she loves; namely, “editing anime to music and reading about fantasy characters with convoluted backstories.”

So, obviously I was already in love with the Disney Channel’s latest animated series by the first commercial break — and that was even before last week’s episode when Luz became the Mouse’s first confirmed bisexual character!

First though: Luz is a Dominican-American teenager who lives in our regular old boring realm where she is a self-described weak-armed nerd. But while she’s waiting for the bus to Reality Check Camp, she accidentally follows a thieving owl through a magical portal and ends up meeting a notoriously criminal witch named Eda the Owl Lady and her demon dog-cat King. She agrees to stay and work for Eda instead of going back home to camp if Eda promises train her to become a real witch. 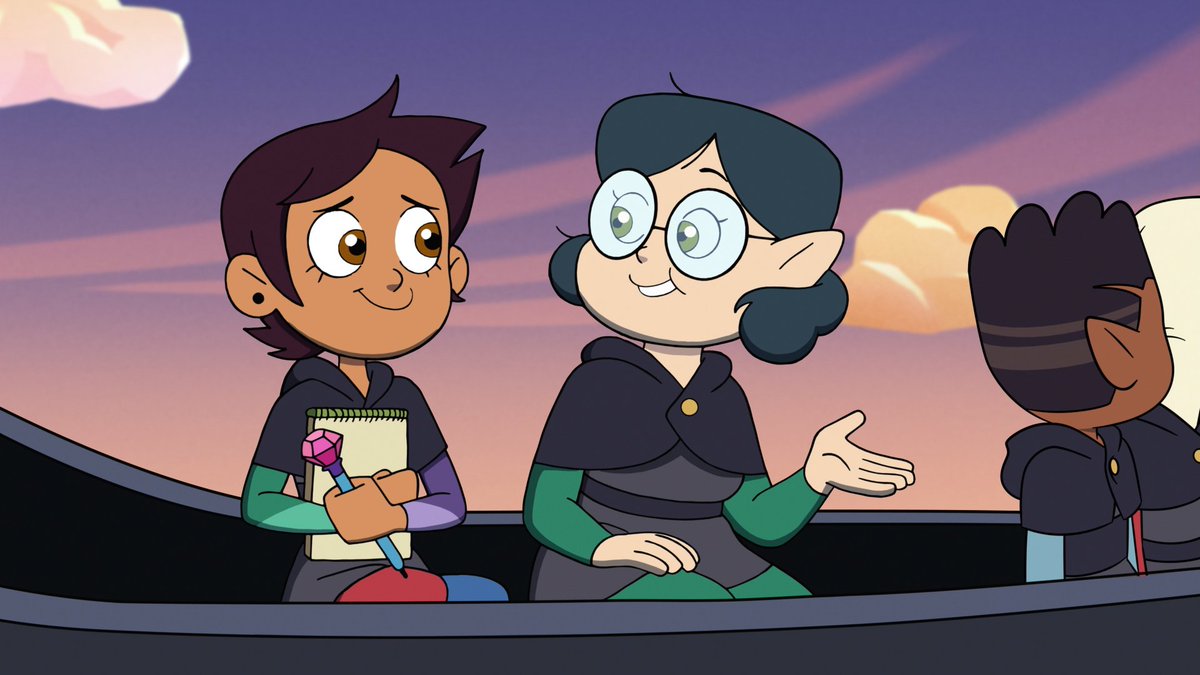 Luz is absolutely obsessed with fantasy stories, and clearly so is Owl House creator Dana Terrace. The result is the most lovable lean-in and skewering of fantasy tropes I have ever seen in my life. Chosen Ones and benevolent wizened wizards and magical schools and artifacts and quests and also so many winks and nods to the stories that are enshrined in our geek consciousness, especially our queer geek consciousness. When Luz gets to magic school, Hexside, she meets another nerd who becomes her best friend. Her name? Willow, obviously. Her skill? Plant magic, like a true Hufflepuff.

Another thing Luz has in common with her creator is her bisexuality, which starts making itself known in episode 16, “Enchanting Grom Fright.” Luz’s frenemy at school is named Amity. She used to be best friends with Willow, actually, Regina George and Janice Ian-style. When Amity is chosen to be Grom Queen, Luz is excited for her, but it turns out the Grom Queen isn’t like a human prom queen; she’s like a Katniss Everdeen. She has to fight a monster, and one that will reveal her deepest, darkest secrets to the whole school. Luz jumps in and offers to fight the monster on Amity’s behalf. Amity lets her, but then steps up halfway through the fight because Luz is losing. It turns out Amity’s fear is rejection. She wanted to ask someone to go to grom with her but was afraid that person would say no. The monster reveals a ripped up letter from Amity asking out her crush. To beat the monster, Luz and Amity dance for him, together, like a prom date, and Luz’s fears are conquered.

Once the monster has been dealt with, Amity reveals the other half of the letter. The person she wanted to ask out was Luz!

Dana Terrace took to Twitter the day after “Enchanting Grom Fright” aired and didn’t beat around the bush.

Representation matters! Always fight to make what YOU want to see! As OH continues I can't wait to explore things that are important to me and my crew. Looking forward to the next chapter. 🦉💕

…Which is next week in WING IT LIKE WITCHES!
Thank you for watching! #TheOwlHouse pic.twitter.com/U8PHHT2g91

In dev I was very open about my intention to put queer kids in the main cast. I'm a horrible liar so sneaking it in would've been hard haha. When we were greenlit I was told by certain Disney leadership that I could NOT represent any form of bi or gay relationship on the Channel.

For those of you keeping track, that’s three queer people creating and showrunning the animated series that have changed the game for LGBTQ+ rep: Rebecca Sugar and Steven Universe, Noelle Stevenson and She-Ra, and now Dana Terrace with Owl House.

I don’t usually insist that you watch the TV shows I write about — but queer nerds, I am truly going to have to press you to give this series a go, especially if you love Steven Universe, Adventure Time, She-Ra, Kipo and the Age of Wonderbeasts, or Critical Role. It’s all about what makes you weird making you awesome, and there are too many hilarious sight gags and queer nerd deep cuts to count. If you lost Harry Potter this year and you feel like a little piece of your spirit shriveled up because of it, Dana Terrace is here to remind you that J.K. Rowling doesn’t own magic, and that “kids” stories can be overtly and audaciously queer.