This review contains Season One spoilers in the front half, then a warning before the Season Two For All Mankind lesbian spoilers at the midpoint!

Apple TV+’s For All Mankind is a sci-fi/alternate history show that imagines what would have happened if the Soviet Union beat the US to the moon. Created by Ronald D. Moore (known for other space adventures such as Star Trek and Battlestar Galactica), the show weaves in real historical figures like Buzz Aldrin and Neil Armstrong, while also adding some of their own, like Danielle Poole, Tracy Stevens, and the astronaut we’re here to discuss, Ellen Waverly Wilson.

I won’t lie to you, I 100% started For All Mankind for the promise of Jodi Balfour. I knew there was a queer character on the show, and I knew the odds were that it would be our Bomb Girls Princess — but wasn’t sure. Then they introduced her and her name was Ellen Waverly which is one of the gayest names I’ve ever heard, so I knew it had to be her.

Though I will warn you, if you’re ONLY in it for Ellen and her sapphic shenanigans… you’re going to be waiting around a lot.

I’m not sure what I was expecting this show to be, but I think I was imagining more Astronauts Wives Club and less…West Wing in Space. The truth is, I only keep up with politics in the real world because I try to be socially responsible and an informed voter, I don’t actually LIKE it, so I definitely don’t seek out TV shows about it. Do I believe that if the United States wasn’t the first country to put a person on the moon that we’d be the first to bring guns to the moon instead? Absolutely. Do I want to see Angela from Bones go from bisexual scientist to astronaut murderer? Not so much. Also, despite there being far more women and/or people of color than were publicly celebrated during the real first trips to the moon and back, there are still a lot of insufferable white men making things worse for everyone. I AM invested in other characters besides Ellen now, and hell if I’m being honest the Season Two finale made me WEEP, but there’s a lot of politics and war talk that sends me to Snoozeville. That said, if you love shows that imagine an only slightly different reality from our own, and also if you love space, this is the show for you.

There’s a reason I stayed invested through the second season of this show. Between all the Space Race stuff that doesn’t interest me at all are moments of character development and humanity that keep me hooked. I find all of the women incredibly intriguing (even the straight ones! I know!) and they all go on such different, unique journeys. In a fascinating decision, almost a full decade passes between the first and second seasons, but none of the character development feels cheap or cheated, the first season set up a trajectory of evolution, and the second season got us there. The second season also features THE Sally Ride, though we don’t get to see her outside of work the way we do some of the other astronauts and their families.

Ellen Waverly starts the show as a slightly timid but determined candidate who keeps her peers at arm’s length. We quickly learn that part of the reason she’s doing that is because she’s sleeping with Pam the Bartender on the sly. 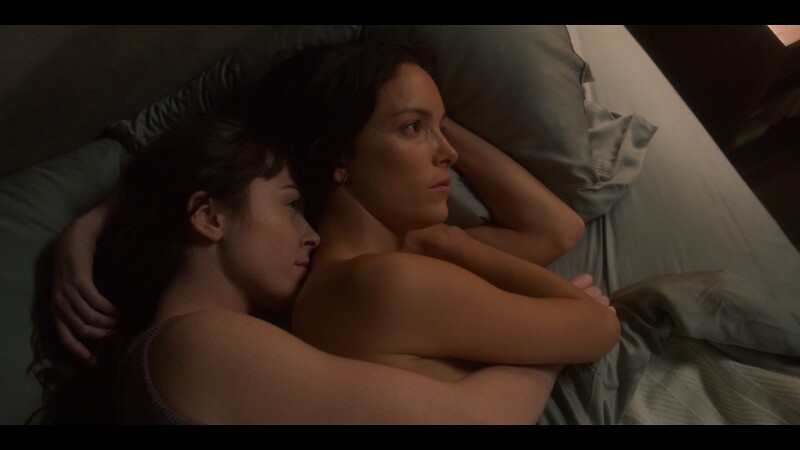 Oh Princess! If Betty McRae could see you now!

Luckily Ellen befriends Larry, a man who also has to hide his sexuality from NASA for fear of being fired. Ellen and Larry decide to get married to avoid any scandal, though doing so breaks Pam’s heart so completely she’s not sure she can be with Ellen anymore.

At the end of the first season, Ellen tries to come out to her boss Deke because he seems like a chill dude who respects her very much, but he FREAKS OUT and is a monster to her about it and ultimately scares her back into the closet; luckily(?) for Ellen, Deke dies before he can out her to anyone else.

Ten years later, Ellen is much less timid and, at least at work, is a take-charge boss who is amazing at her job. One day she gets a package from Pam; it’s a book of poetry that Pam wrote, with a note asking Ellen if she can tell which poem was about her. Which frankly is the gayest shit I’ve ever heard. Ellen decides to go to a reading and of course because Ellen is just about ready to be with Pam, Pam has a girlfriend. But the attraction is still there, and so is the love, so the two eventually reconnect. These two actresses, Jodi Balfour and Meghan Leathers, are so good at saying a million things with just their eyes, no words necessary. The relationship between Ellen and Pam has a gentle sweetness to it, and a tangible yearning to be together in a world that wants to keep them apart. But times are changing — it’s the 80s now, after all — and maybe their time to be together has finally arrived.

In the bonus content on the Apple TV+ app, there is a video message that Ellen leaves Pam, and it’s the most relaxed we’ve ever seen her. She’s wearing Pam’s shirt and dreaming of being able to hold Pam’s hand in public, of kissing her whenever she wants. She spent a long time in the closet with her eyes shut tight, refusing to even peek out into what the world could look like if she left it, but now she’s standing there, the door is open and so are her eyes, all she has to do is step out. Happiness is finally within reach. 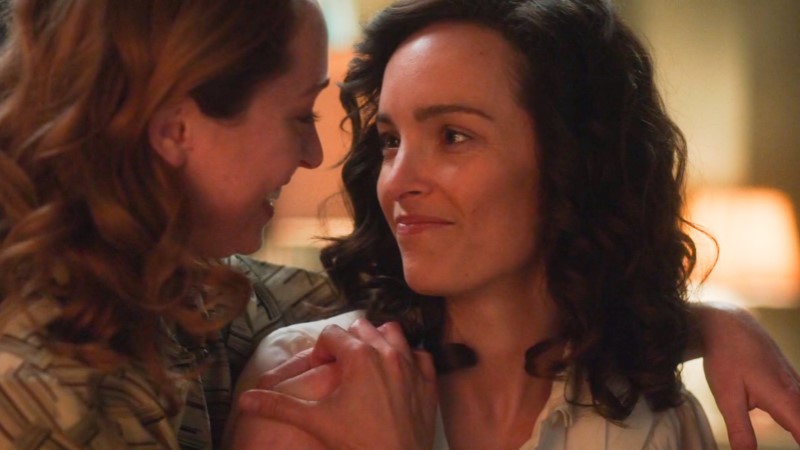 :sob-sings: We could have had it aaaaaall

But then one day Larry and Pam are talking about Ellen’s career path and how people think she’s on track to be the first woman to be President of the United States. 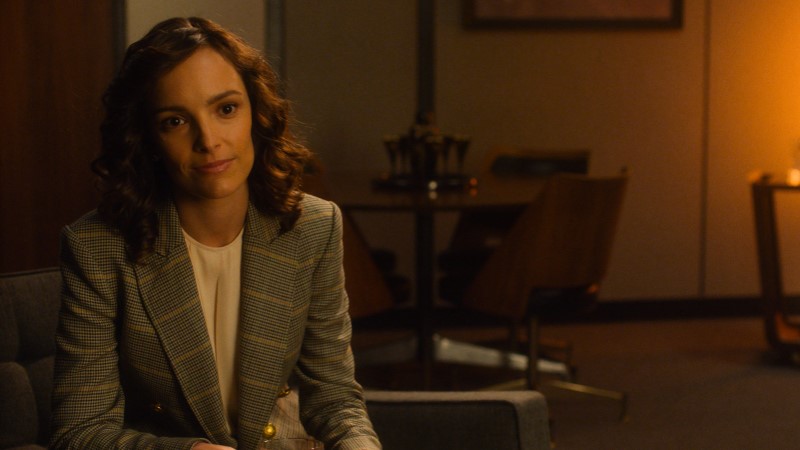 I’d vote for her based on her blazer game alone.

Pam listens to Larry say this and instead hears, “Unless she gets outed first.” And so Pam decides to take the decision off Ellen’s shoulders. She writes a letter full of lies, telling Ellen she’s going back to her ex-girlfriend, that this was fun but it wasn’t real. It’s heartbreaking because we know, and Pam knows, that Ellen would pick Pam every time, over any promotion, over any job. She’s said as much. But Pam didn’t want to be the thing that stood in her way. And it’s heartbreaking. And Larry is apparently too daft to realize this is a direct result of their conversation, so Ellen ends the season believing that she just wasn’t enough for Pam. And all the accolades for being a hero astronaut and favored by the President mean nothing if she can’t share them with the woman she loves.

Unfortunately that’s where their story ends for now, both by nature of even Ellen’s sliver of the action being limited, and by the show itself only being 10 episodes per season. Sometimes it feels like years pass between one Ellen and Pam scene and the next, especially when it felt like an entire episode was dedicated to Gordo’s workout routine. But it’s worth the wait, in my humble opinion. I appreciate that Ellen’s story isn’t exclusively torment and torture. She’s excelling at her job despite being closeted, and hell maybe soon she’ll be powerful enough that she can come out without it being a big issue. It’s a fictional depiction of history after all, so why the hell not? Ellen and Pam’s story isn’t necessarily unique, but it’s so well acted that I couldn’t help but rewatch their scenes to watch the way their eyes drink each other in or listen to a gentle “hi” that says so much more than that one little word. Hopefully these two can find their way back to each other in the upcoming third season. In the meantime, maybe Ellen can start lesbian bar hopping with Sally Ride.