I spent much of last year trying to convince people to watch the show about rich, semi-superpowered teens running away from their hot, evil parents who use a charitable organization to cover up the fact that they murder a kid every year in order to bestow life force on a powerful alien as payment for him bringing their greatest dreams alive. Well, folks, in its second season, Marvel’s Runaways has gotten even better, taking most of the main components of the first season and supersizing them — even the episode order increased. The parents are more evil; the stakes are higher; the kids are finally actual runaways.

Yes, that means Runaways doubles down on some of its flaws, too, like its propensity for extremely convenient plot developments (like finding a massive underground mansion that still somehow gets natural light and seems to magically get less drabby and sparse with every passing episode to the point that it eventually becomes a gorgeous venue for Molly’s quinceañera) and its often cringe-inducing, easy-to-predict dialogue. I, for one, find Runaways’ cheeseball factor part of its charm. It belongs to the brighter, campy camp of superhero fare, like The Flash, Supergirl, and Legends Of Tomorrow. It has the gorgeous, thoughtful visuals of a modern, cinematographically driven sci-fi series and the corny dialogue of a grown-up version of Mighty Morphin Power Rangers, and that juxtaposition honestly rules. 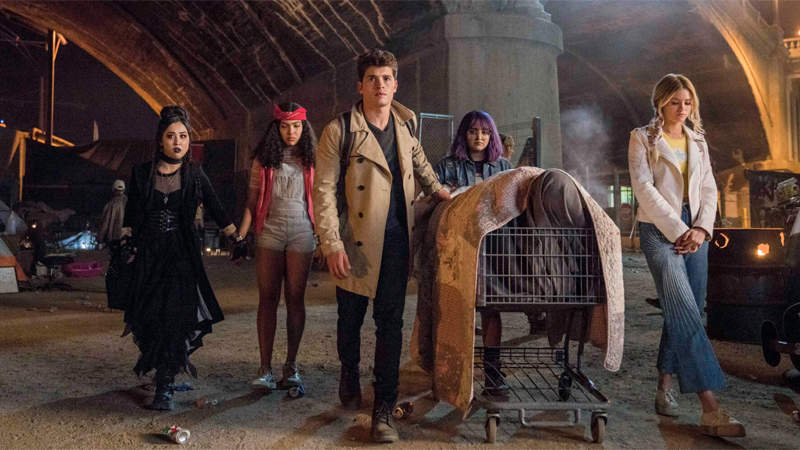 Because Runaways always manages to be real and compelling in the areas that matter, even occasionally grounding itself in our world despite the presence of a telepathically linked dinosaur and a glowing alien species. Season two acknowledges the prevalence of youth homelessness in Los Angeles and the ways these kids have to build their own resources to survive. The Runaways are newly part of this world, but as very recent rich kids in the burbs, they’re outsiders, and the show explores this shift for them in a way that sharply recognizes their relative privilege. Even Gert, constantly vocal about social injustice, admits she hasn’t seen much social injustice with her own eyes until they’re eating in a soup kitchen in the premiere. They learn survival skills from Topher, a captivating new character whose arc unfortunately ends up feeling truncated.

The fight sequences grow up in season two, too. Slow-motion is used liberally, and lighting and color add mesmerizing visual layers to a lot of the action. Music supervisor Alex Pastava (who also does Grey’s Anatomy, Riverdale, and Mad Men) is one of the best in the biz, and Runaways has a really clear, dynamic voice that aids the world-building and evokes the story’s comic book roots. Even when it’s super extra, the stylization is one of its strongest assets.

Runaways season two isn’t necessarily unfocused, but there are several strong subplots — as with Topher’s arc — that end up getting mowed over by the central fight between the parents and the teens. Another involves Leslie, who finally confronts the reality of Jonah’s manipulations and abuse, starting right away in the premiere when she admits to the rest of Pride that there’s a lot he didn’t tell her. Later episodes finally grapple with how fucked up it is that Jonah knew Leslie when she was a child. He convinced her cult leader father that they were destined to be together, and Leslie’s mother tried to save her from his grasp. But even this dark, complex storyline doesn’t get the time or attention it quite deserves, especially since we get so little of Leslie’s emotional reaction to it in the present and how it might shape or shift her character motivation. 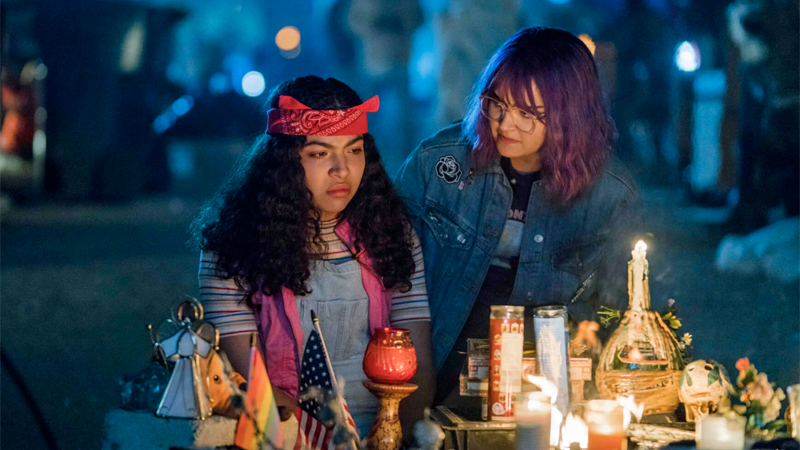 The show is strikingly real when it comes to Gert’s withdrawal from her anxiety medication, too, something I can’t recall ever seeing portrayed on television before and certainly not on a show reaching a young audience. It isn’t just mentioned off-hand or only tackled within the confines of a single episode but an ongoing, ever-present part of her story. Her arc isn’t driven by it, but it is affected by it, and that feels real. And Runaways thankfully doesn’t come up with some sort of magic solution for her either. She ends up having to find a creative way to get meds, unfairly using Chase in the process. Because the other thing Runaways is real about is that these are freakin’ dumdum teens. They’re emotionally volatile, and they don’t always make the best decisions (sometimes they make actively bad ones, which Alex sure does have a penchant for). Much of season two is about them all figuring out how to be a functional family, occasionally failing along the way.

As for Nico and Karolina, while much of season one focuses on the build-up to their romance, it’s refreshing that season two begins with their relationship fully a given. No more will-they/won’t-they tension; they just are. That doesn’t mean their relationship isn’t without its problems. Both Nico/Karolina and Gert/Chase find themselves having to deal with suddenly very adult relationships given their living circumstances, and it isn’t always easy. But the relationship drama between Nico and Karolina doesn’t feel like conflict just for the sake of conflict. It’s convincing and organic. Even when Nico snaps seemingly out of nowhere on Karolina after they’ve fought Nico’s parents, it’s less about relationship drama and more about Nico’s inability to really process what has happened. 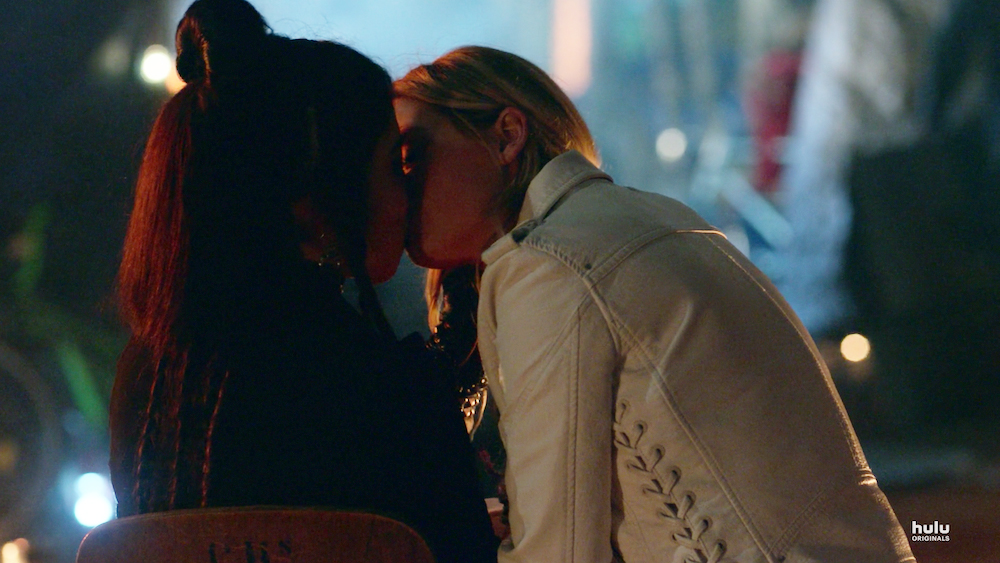 Because there’s no longer any doubt that their parents are bad. Occasionally, the teens try to wrestle with their parents’ motivations. Maybe they did these things for the right reasons. Maybe they really do just want the best for us. But the parents prove time and again that they’re willing to severely cross moral lines for personal gain. It forces the teens to struggle with the kinds of questions and thoughts that victims of familial abuse do. They fear becoming like them, particularly Nico, who finds herself crossing series lines over the course of the season, influenced by the power of her staff to the point that it seizes control of her. They’re all disoriented from the persistent lies, gaslighting, and manipulations. Their parents have failed them so spectacularly that there seems to be no going back. “They’re our parents; how can they be such monsters?” Nico asks through tears in the premiere.

Chase, interestingly, is the most forgiving and willing to see their parents’ side of things, which leads to a big decision for him near the end of the season and fractures the runaway family. It’s hard to not see these feelings of his in the context of him being the only one of the teens who experienced physical parental abuse long before Destiny Gonzalez came into the picture. For the rest of them, this has been shocking. But Chase has long been conditioned to the back-and-forth nature of his egotistical, abusive father. Runaways doesn’t really parse out any of this, though, because this season is weirdly forgetful of Victor’s history. Watching Janet fawn over his intelligence is disturbing in a way that doesn’t seem intentional.

It’s straight up unnerving to watch Nico’s parents team up against her in the finale, willing to physically hurt her for the supposed goal of saving her — and it should be unnerving! Runaways doesn’t just play the whole parents vs. teens things as some sort of playful premise; it’s straight-up dark to watch parents use weapons on their own kids. The show layers in darker emotional consequences and motivations beneath its literally colorful world, and that gives deeper meaning to those elegantly crafted action sequences.

Even when the dialogue gets corny, the things these characters say and do feel authentic, and there’s even a little sense of self-awareness under it all, the teens often referencing pop culture in a way that signals they know that their lives are made up of the heightened stuff of comic books. Runaways balances serious storytelling with fun camp deftly in its second season, making its story about family a wild, powerful ride.