Over the last few years, sex toy companies and stores have asked us to review their toys in exchange for, you know, their toys. Today we’re reviewing the the Lovense Hyphy.

Like their cousin the suction/air pressure toy, oscillating toys aren’t new anymore. Both sensations were somewhat novel when toys like the Womanizer, the Eroscillator and the Zumio came on the scene. I had never used an oscillating/rotating toy before I tried the Zumio, and I LOVED it. Since then, several toys like the Inya Le Pointe with a similar shape boasting “concentrated vibrations” have popped up; they look fun, and also the price point suggests their motors probably aren’t powerful enough to get the intensity of something like the Zumio. I assumed there wasn’t much there to be improved upon — until I saw the Lovense Hyphy Dual-End High-Frequency Vibrator. It had a substantial enough base, so it looked like it did, in fact, house a high-frequency motor. I was also intrigued by the interchangeable heads — so I put it to the test.

The first thing I noticed, as someone who owns a lot of vibrators, is that the storage for the Lovense Hyphy is pretty unusual. The toy comes in a hard plastic case with a clear lid for viewing that reminds me of the cryogenic sleeping pods in Alien. Underneath the case’s midsection where the main body of the toy is stored, there’s a miniature storage area for the toy’s three interchangeable tips. I didn’t love it at first — the case follows the curved shape of the toy, which makes it sort of awkward to fit into tight spaces like a drawer or a storage bin, and it doesn’t feel as intuitive to handle as a drawstring bag. It felt clunky and fussy at the same time. I was trying to imagine popping open the lid, managing the tiny interior lid and juggling very small wand attachments in the middle of partnered sex with people moving on the mattress and your hands covered in lube, etc. It’s not ideal, and it would be easy to lose an attachment in the bedsheets.

However, one neat thing I’ve never seen before is that the case itself has both inner and outer charging ports, which means that you can plug in the case itself and charge the Lovense Hyphy inside it with the lid closed. I always hate charging toys out in the open air and exposing them to dust or cat hair or what have you, so that option is genuinely appealing (and it also fits the sci-fi theme).

As far as the actual vibrating goes, the toy had a lot of options. There are technically five ways to use the Hyphy: 1. sans interchangeable tip, 2. with the soft spherical silicone tip, 3. with the two-pronged “U-shaped” tip (shaped kind of like the Jimmyjane Form 2), 4. with the “tongue” attachment, which is a long, flat plane of silicone meant to feel like oral sex, and 5. using the handle of the toy for internal/G-spot stimulation. 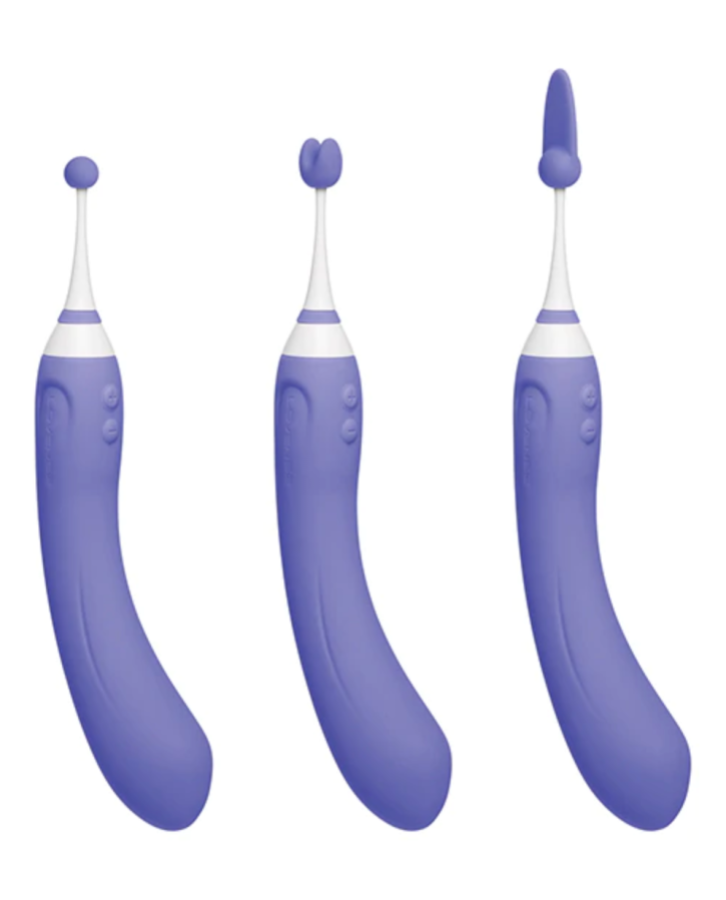 I tried option 1 first — my first impression was that it wasn’t quite as strong as the Zumio and that the sensation was concentrated mostly in the very tip of the toy, whereas in other vibrators with this pinpoint wand shape, you can feel sensation more along the entire length of the wand portion. Then I tried bumping up to the second power setting, and it was DEFINITELY strong enough. If you’re someone who needs very intense stimulation, very focused stimulation or both, I’m pretty confident your needs will be met here.

Things got even more interesting when I tried the attachments. I didn’t particularly fall in love with the spherical one, although it’s likely a good fit for anyone who’d like to buffer the vibrations of the toy a bit. The U-shaped attachment feels fantastic; because of the way clitoral tissue extends inside the vulva, stimulation on either side of the clit often feels good for people, and this is a great way to get that sensation without committing to a vibrator that does only or primarily that (also, it feels great on nipples or other body parts!). I will say that using lube improves the experience of using the Lovense Hyphy pretty dramatically; the soft matte silicone of the attachments is a really pleasant texture, but it can also create some drag against your body, which kind of dulls the sensation.

The long tongue-like attachment was the one that confused me most before trying the Hyphy, and this did not really change after I tried it out. Although it’s advertised in the product copy as being reminiscent of oral sex, it is perhaps not surprising based on even theoretical knowledge of how either oral sex or pinpoint vibration work that this doesn’t really bear out. That doesn’t mean it’s a wash, though. After trying a few different angles and types of pressure, I found a unique experience from holding it super lightly over my clit so it just barely touched it as it flickered — for me, at least, this created an intense sensation (but not one that made me come) and could be fun for edging or just for using the Hyphy a little more creatively and counter to its stated purpose of making you orgasm super fast.

Loading Comments...
GET 25% OFF ALL AUTOSTRADDLE MERCH WITH CODE PRIDE22 THIS WEEK ONLY GO TO THE AUTOSTRADDLE STORE →